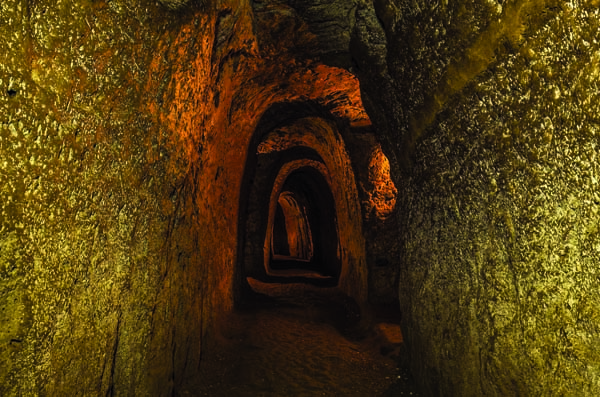 According to the documents of the Department of Cultural Heritage of the Ministry of Culture, Sports and Tourism, Vinh Moc tunnels together with the whole tunnel system of Vinh Linh, Quang Tri was named a National Special Heritage in 2014.

Vinh Moc tunnels in Vinh Moc Village, Vinh Thach Commune, Vinh Linh District of Quang Tri Province have long been unforgettable names on the country’s map of historical places. This ‘fiery land’ used to be called the ‘dead coordinate’, being the target of enemy annihilation. But multimillions of tons of bombs and shells raining from the sky and the fleets in the sea have failed to destroy Vinh Moc’s historical, military, cultural and architectural values; a symbol of bravery, resilience and the invincible vitality of the people of Quang Tri.
I chose to ride a bike for nearly 600km from Hanoi to Vinh Moc on a summer’s day in late July.
History came back in cool breezes blowing from the sea, in the bricks of the vestige, rusted by time, and on the red earthen path covered with moss that led to the tunnel entrance. Making slow, careful steps in the red light of the torch, I followed the clear, soft voice of the young guide girl in the 1.1km long maze of the tunnels.
One of the peculiarities of these tunnels is the very gummy red basalt soil. It made it easier for digging and kept the tunnel walls and ceiling strong despite the close proximity of the sea. It also made it possible to dig big lines, much bigger than the other tunnels elsewhere, so that people could move easier. The entrances were about 2-3m away from the main line, so bombs that hit them could not destroy the whole structure or kill the people inside.
From 1965 to 1967, the people of Vinh Linh dug 114 big and small tunnels, totaling 142km in length. Most of the tunnels have a ventilation hole every 50m, so each one has a few dozens of them. But Vinh Moc has only 2 ventilation holes in all, and both serve only the 1st floor. The 2nd and 3rd floors below have no such hole. Nevertheless, in all 3 floors it feels cool and airy, and not stuffy anywhere. Some people explain that because Vinh Moc tunnel has 13 entrances, 6 of which open to the hills and 7 to the sea, in the right direction to be able to suck in the air, so it feels dry and fresh even at the depth of 15-23m under the ground.
I went through all 3 levels at different depth with different functions. Level 1, 12m under the ground, served as offices for the party committee, the people’s committee and the armed forces. There is a cafeteria in the main axis. Level 2, 15m from the ground, is the dwelling space. Every 1-2m on either side of the main axis, there is a deep hole which serves as a family apartment. The guide girl told us there were 94 such apartments in the tunnel.
Each apartment is only 2-3m2 in area, but could house 3-4 people at the same time. On the same level 2 we were stunned to find a delivery room which witnessed the birth of 17 of the total of 64 kids born in the tunnel systems of Vinh Linh. Level 3, the deepest, 23m beneath the ground, is the bomb-proof hiding place. As deep as it is, it’s still above sea level, and people lived there relatively comfortably even in rainy season.
Today, Vinh Moc has become a famous tourist attraction. Every day the site receives hundreds of visitors.

*The article in Vietnamese version was printed on www.nguoiduatin.vn, 2 January, 2017.

Text by Duong Thu and Photos by Le Duc Thanh