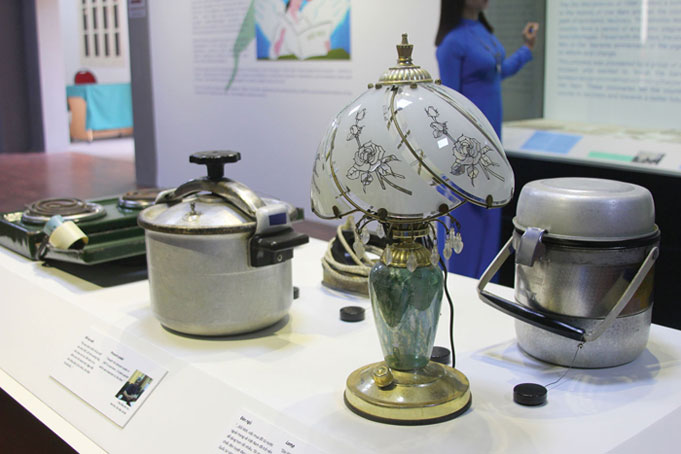 A Special Exhibition about Reform Period

‘Reform Period – The journey of dreams’ is a special exhibition designed with about 200 artifacts, documents and images from the Vietnam National Museum of History’s collection, combined with stories, introductions, and quotes…
Through many documents, artifacts, audio clips, stories of politicians, researchers and common folks, ‘Reform Period – The journey of dreams’ conveys to visitors images and information about an important historical period of the country. Behind the changes and achievements are the spirit of creativity and aspiration for innovation nurtured in each person.
The exhibition space presents 5 major topics:
1. Reform Period or death: presenting reasons for Reform Period, reformation philosophy and policies and the role and legacy of politicians, who initiated, led and organized the mission of rebuilding the country.
2. The opportunity: economic reforms open chances for Vietnam to develop.
3. Dynamics – Integration: The Reform Period made Vietnamese people more dynamic and opened up the country to integrate with the world community through exchange, cooperation, import and export.
4. Growth: The Reform Period transformed Vietnam from a food importer to the second biggest rice exporter of the world. After 30 years of Reform Period, Vietnam’s socio-economic infrastructure has developed quickly with many modern constructions that truly face-lifted the country.
5. Strength: The Reform Period has improved the people’s life in terms of healthcare, education and culture; refreshed and boosted the life and work of each person, each family and brought renewed faith and strength for Vietnam to move steadily toward prosperity.
The exhibition also has a separate space, called the ‘Wall of Memories’, for visitors to express their recollections about the Reform Period period.
The exhibition also impresses visitors with a humane approach, introducing voices and popular slang through stories and artifacts about the Reform Period. Media equipments supplements with more comprehensive information, such as clips of interviewed specialists and common people, for the showcased content.
Through this exhibition, the Vietnam National Museum of History would like to receive more stories, materials and artifacts about Reform Period from the public in order to further improve and enrich the exhibition.