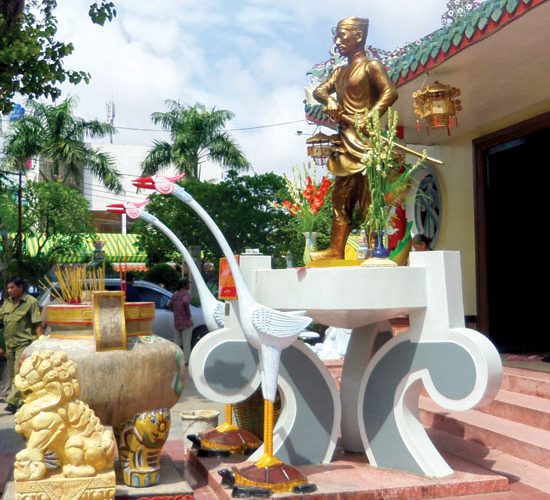 The once and future hero

The statue of Nguyen Trung Truc

An altar in the shrine

The commander stands straight and tall on his pedestal, his sword partly drawn. His uniform is from a former age. The lifelike statue of Nguyen Trung Truc guards the entrance to his house-shrine. I am in the town of Rach Gia in Kien Giang Province for the week-long October festival in honor of the hero, a Vietnamese leader who fought the French takeover of Vietnam in the nineteenth century.
In the long Vietnamese tradition of venerating heroes, the greater pantheon of those who fought the Chinese and Mongol
invaders over the centuries is known to all. Tran Hung Dao, the Trung sisters Hai Ba Trung, Le Loi, Nguyen Trai and others appear as names of streets, schools and on a myriad of institutions. The lesser pantheon is made up of heroes, statesmen and scholars from later periods whose veneration and reputations have fluctuated over the centuries with the changes in dynasties and regimes.
Nguyen Trung Truc’s place, however, seems secure. Although his festival includes parades, speeches by dignitaries and many
special events, this is a hero that belongs to the people, and the heart of the festival takes place in the streets.
Several days before the festival begins, an ad-hoc market is set up where used clothes from all over the world are sold at rock-bottom prices. My Vietnamese colleague and I spent one morning looking through stall after stall of men’s shirts. The labels from France, Italy, Russia, Japan and a host of other countries were fascinating with their different languages and sizes. With prices ranging from VND20,000 for well-worn shirts to VND70,000 for better quality dress shirts,we decided to buy two for luck. Given the different systems of sizing, there was nothing we could do but try them on.
The next day, we dismissed class early and headed with a group of students to the shrine. The streets around were filled with tables, with hammocks strung everywhere. The present building is built on the site of earlier shrines going back to the 1800’s, when locals covertly honored Nguyen Trung Truc in spite of French repression. It is in the ancient Chinese house form of one wide room in front and two smaller rooms behind. Passing the hero’s commanding statue, we entered the main room.
The shrine was ornately decorated and an arch of yellow
chrysanthemums surrounded the altar. Incense filled the packed room like a gray cloud as hundreds of people offered prayers and
petitions to their hero. Nguyen Trung Truc’s help is considered
especially efficacious, since he surrendered his life voluntarily in
exchange for hostages held by the French.
We drifted through the crowd to the back rooms, which are filled with artifacts, mementos from Truc’s life and paintings of the battles in which he led the people. A large diorama depicts his burning of a French ship at Nhat Tao village. A painting shows the leveling of the French ramparts at Rach Gia. The French soon retook the site and executed him on October 27, 1868.
We returned to the streets, which had been turned into a huge outdoor dining room with tables everywhere. A volunteer led us to a large round table for twelve. As we sipped our tea and talked, one of the festival organizers approached and greeted us in excellent English. He answered our questions and explained that over eight hundred volunteers had worked and were still working to prepare the 170,000 free vegetarian meals they expected to serve during the week. Over five hundred tons of produce and foodstuffs had been donated by local merchants and others farther afield. We were served a variety of traditional dishes and the food was quite good.

Pilgrims come from all over the province and neighboring provinces as well. Five hundred hammocks were strung along the streets, and we were told that more than five hundred more were available at other shrines and temples throughout the city for those with no place to rest or sleep. While the festival primarily serves the poor, nearly everyone in Rach Gia tries to eat at least one meal at the festival in honor of Nguyen Trung Truc. The volunteers feel they are serving the people in the spirit of their hero as he would have done.
Beginning with the Trung sisters’ revolt in 40 AD, the Vietnamese have fought foreign invaders for nearly two thousand years. Their
indomitable spirit is supported by the active memory and veneration of their heroes, and they unite with their past to fight for a better future. Ancient legends tell of the Trung sisters and others who reappeared centuries after their deaths to fight for the people against the foreign invaders. I was told that some of the local people believe Nguyen Trung Truc will also return if Vietnam is again attacked from outside. May Vietnam always have such heroes as Nguyen Trung Truc!

Gate of the shrine