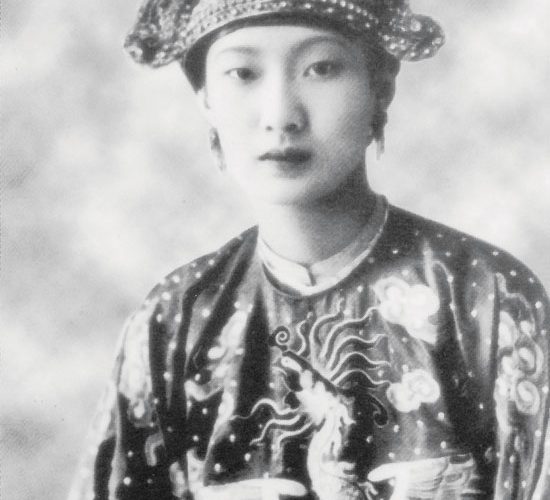 The last queen of Vietnam

Let your heart be touched by good memories of Queen Nam Phuong, the wife of Bao Dai, the last king of the Nguyen Dynasty, who abdicated on 23 August, 1945.
On the morning of 7 August, 1945, while waiting for King Bao Dai to hand over his royal sword and seal to the Revolutionary government, Queen Nam Phuong voluntarily had her official headwear with nine golden dragons attached to it sent through Mr Pham Khac Hoe to the new authorities.
After that, receiving the news that the French army had returned to restore their colonial rule in our country, Queen Nam Phuong was crushed with grief. As an ex-Queen and a woman of independent Vietnam, she sent a message to her friends worldwide, calling them to fight against the French reoccupation of Southern Viet Nam. The letter read:
‘Vietnam has been liberated from Imperial yoke of slavery of France and Japan. On his abdication, my husband, the former King Bao Dai had announced, “Better a citizen of an independent country, than a King of an enslaved one.” I have denounced without regret, all of the Queen’s privileges, in order to help defend the fatherland’s sacred independence together with other women.
At this moment, blood is being shed on the Southern land, the cradle of my childhood. Countless living souls are being burnt by the evil greed of French colonialists backed by English forces, who act against the instructions of the allies.
I call on those who suffered from the cruelties of the recent Great War to act in order to stop the nameless brutality unleashed on my country.
In the name of thirteen million women of Vietnam, I humbly ask all my friends and friends of Vietnam to stand up for our freedom.

Even without her crown, Vietnam’s
last queen served her people with
dignity and grace

By demanding your governments intervene for the establishment of a true and just peace, you are fulfilling the most urgent responsibilities of humanity and deserve our people’s utmost gratitude.’
After the victory of the August Revolution, to help finance the needs of the revolution and the war of resistance in the South, our government organized Gold, Silver and Copper Weeks and called on the people to contribute to the Rice Jar of Unanimity.
In Hue, the Gold Week was launched on 17 September, 1945 on the South bank of the Perfume River. Queen Nam Phuong was invited. She was the first person proposed by pharmacist Pham Doan Diem (Head of Finance Dept. of Thua Thien Province) to donate gold for the needs of the army. She took of all the jewellery she wore and put in front of the clerk, who then handed her a receipt signed by Mr Pham Doan Diem. They also pinned a metal red flag with a yellow star on her dress. Hue people followed her example and lined up to contribute until 24 September, 1945. The total contribution was 925 taels of gold.
In his memoir ‘The Revival of our Nation’, Mr Truong Chinh also mentioned a lovely episode about the Queen. ‘…Nam Phuong, Bao Dai’s wife, also made a beautiful gesture when a counter revolutionary came to advise her to take part against the Revolutionary Government. She silently walked to the piano in the corner of her quarters and played the Revolution’s National Anthem.’
After the National Resistance Day (19 December, 1946), Mrs Nam Phuong and her children left Hue for France. Although she’s gone, we believe that the memories about the revolution era never faded in Queen Nam Phuong’s heart.

By Do Nguyet Huong*