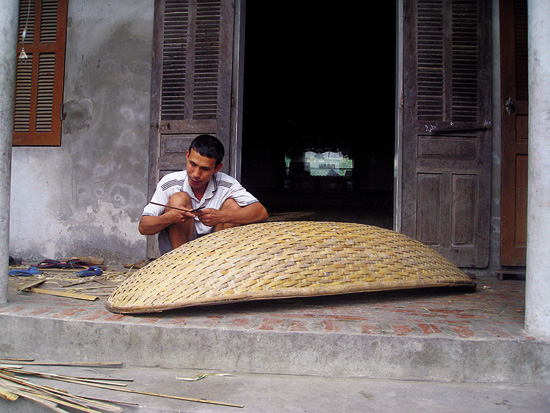 Bamboo down the river

Vietnam Heritage, August-September 2011 — Noi Le Village, in An Vien Commune, Tien Lu District, Hung Yen Province, northeastern Vietnam, is known for the bamboo boats it used to produce in great numbers, which once were used in most corners of the Red River Delta. Now the craft of making the boats is falling into oblivion.
Mr Pham Van Lau, 82, one of the few people  still in the craft, said it had begun in the village in the 15th century, started by a government official called Phan Sao.
Mr Lau said a group of Vietnamese warriors  wanted to cross a wide river during a battle against China’s Ming Dynasty [1368 to 1644] troops. The Vietnamese warriors hadn’t brought boats, so they cut down bamboos, split them into thin sticks and wove them into shells that they sealed with the sap from the cassava tree.

Mr Lau also said, ‘Once, Phan Sao visited a friend in Noi Le Village. He saw that the villagers lived in a low area with a lot of water all around but didn’t have boats and it was very difficult to move from one place to another, so he taught the villagers how to make boats from bamboo.’
Mr Lau said Noi Le villagers used to make very big boats that could carry 10 tonnes of goods. After 1960, the big bamboo boats were no longer used, and now villagers only made small boats.
‘It is not hard to make such boats, he said. ‘Yet it requires skill and care. In the past, the whole village made bamboo boats. The craft brought Noi Le villagers food and clothes, and some families even became wealthy.’
According to Mr Pham Van Mi, head of Noi Le Village, no more than six households are still making bamboo boats to earn their living. He himself quit it three years ago.
‘As the market economy was introduced (in early 1990s), lots of rivers and ponds have been filled with earth to make room for the construction of houses and factories,’ Mr Mi said. ‘Also, iron boats are more durable than bamboo ones, so bamboo boats no longer sell in the market.’
He introduced me to Mr Do Van Thanh, who is only 36 but has been making bamboo boats for more than 20 years.
Another man, Mr Do Van Ba, and his two brothers all earn their living by making boats out of bamboo. They each make a profit of VND30,000 ($1.50) – VND50,000 ($2.50) a day.
‘Now, we do just about one-fifth of what we did,’ Mr Ba said ‘We now have to struggle to make enough money to survive.’
However, when I asked whether or not they wanted to give up the job, they all shook their heads. ‘It is a craft passed on from our ancestors. How can we quit it?’ Mr Ba said, ‘I would find another job only if no one wanted a bamboo boat.’
‘Years back, the village was very busy. There were all kinds of noises produced by people doing different jobs in the process of making bamboo boats.’ Children of seven or eight had helped. ‘People from different places flocked here to buy our products. We made a lot but people bought them all.’