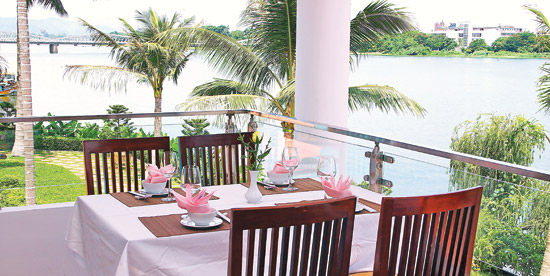 Waterfront in Hue: The place to stay

Need a place to stay in Hue? I recommend you get as close to the water as possible. Unlike in Hanoi or Saigon, which have grown up mainly on one bank of the river, in Hue, the river is the very soul of the place. In Vietnam’s largest cities, you can conduct all your business or do all your sightseeing without ever glimpsing the river. In Hue, both locals and tourists cross the river every day. And what a lovely name it has too – The Perfume River. No, it is not that the waters have the smell of Chanel. Upstream, the wood from certain trees, when burned, gives off a fragrance. â€˜Per fumeâ€™ originally means â€˜by smokeâ€™. The Century Riverside Hotel Hue is the best choice for soaking up the Hue ambiance. This full-service, four-star hotel has well-appointed rooms, good food and beverage, beautiful gardens, a spacious swimming pool, a spa, a fitness room, a tennis court and even a small clinic. Above all, its terrace bar, its restaurant, and its riverside rooms with balconies each afford a ring-side seat for Hue’s star performance-the quiet flow of the river.
It is a mark of the friendliness and attention to customer care of this hotel that the receptionist remembered me from my visit the year before. She made sure I got the same fifth-floor riverside view with ample balcony. The room itself had bright, white-washed walls, which contrasted with the dark cherry tropical hardwood furnishings. A string of royal Hue purple orchid petals adorned the bed and a framed photograph of old Hue hung on the wall behind it. You know exactly where you are in this hotel. This is no world-wide chain hotel that could be any old where!
So it was that I sat down with a glass of Bordeaux, whose name aptly translates as â€˜beside the watersâ€™, to enjoy another Hue sundown with the waters lapping below. The sun gradually descended over the Western Hills with a sky of ever-deepening hues of blue, orange and tangerine. The neon lights of advertising boards across river were reflected in the water, gradually forming broad bands of sea-blue, green, silver and purple, reaching right up to the banks of the hotel. Directly below, birds were beginning to roost in the coconut and fan palms. A flock of egrets skimmed over the water, their whiteness contrasting with the darkening sky. The chugging of a tourist dragon boat also contrasted with the paddling of a lone punter in his dugout canoe. Such a poetic and relaxing way to end a day!
I awoke the following morning to the sound of birdsong. Rubbing my eyes, I spotted the little troubadour out on the balcony wall – a sparrow! Then after freshening up in the bathroom-cum- shower using the sweet-smelling complimentary toiletries, it was down to the Terrace Restaurant to enjoy a substantial breakfast and morning meditation by the river.
Naughty, I know, but I could not help but laugh at the antics of local people using perhaps for the first time a toast machine. The fact that the Vietnamese warm their bread leaving it still white rather than actually toasting it to a brown, I find merely different. Sticking whole baguettes onto the grill is more curious. But on this morning, I witnessed a lady put a large knob of butter onto a slice of bread and then put it into the machine. Within a while, there was melted butter all over the toaster. I sharply told her the correct procedure was to spread the butter on afterwards with a small knife called a butter knife which is something rarely seen in Vietnam. I should not have done so, but I told her she had probably ruined the machine. I felt a bit bad about embarrassing her, but later I think I made amends by entertaining her and her family by singing a Vietnamese lullaby to her young child.
It was a lovely, warm, bright morning and everyone was enjoying their buffet breakfast out on the terrace; the river now looking as cheerful by day as it looks romantic and mysterious by night. There was a notice on the wall â€˜Smoking Areaâ€™.
There was a time, not so long ago, when the Century Riverside Hotel Hue practically had the monopoly in this end of the city. Now, a whole tourist enclave of guest houses and one-to-four star hotels has sprung up behind her. Some of these places I know are very fine hostelries indeed and like this grand old dame are excellent values for money. Yet, none of them have the full range of facilities as this one, and none of them night and day brings you so close to the waterside, to this beautiful, ever-rejuvenating river, which as I have already opined, is the very heart and soul of Hue.