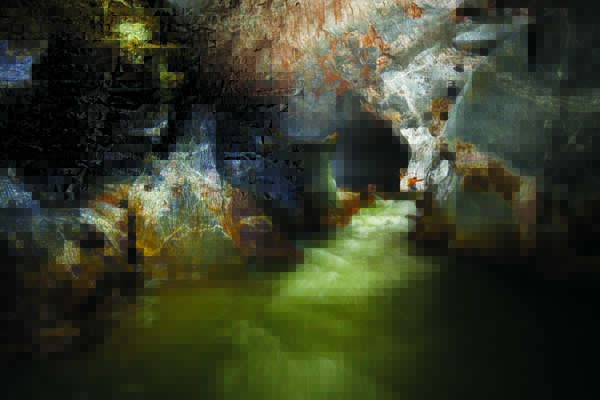 People who admire the heroism of the British divers that risked their lives to rescue the young Thai boys from Tham Luang Cave will get the chance to follow another mission by the same heroes in Vietnam.
The famed divers Richard Stanton, John Volanthen, Jason Mallison and Chris Jewell are diving inside Son Doong Cave in Quang Binh Province to explore a mysterious passage found at the end of the cave.
In June last year, twelve young boys, members of the youth football team Wild Boars, together with their coach, entered Tham Luang cave network in Chiang Rai, Thailand and were trapped by rising flood water.
Richard Stanton and John Volanthen were the first divers who found the boys alive in July, a miraculous rescue mission in an extremely dangerous situation.
In Vietnam, the four dived to explore a passage connecting this cave with another cave nearby.
The four worked with caving expert, Martin Holroyd, who works as a safety guide in tour expeditions run by Oxalis Adventure Tours, the sole tour provider into Son Doong. Cavers from the British Cave Research Association suspected that Thung Cave, a grotto 600m from the end of Son Doong, connects Son Doong through the passage. Thung Cave, explored in 1994, is 3.3km long and it has a large river running inside, just like Son Doong.
In 2010, during the thorough survey conducted by members of the British association, the cavers found out that water from the river running inside Son Doong goes through a gate at the end of the giant cave.
At that time, the British caving team believed Son Doong and Thung caves connected through the passage, as the river inside Son Doong was found coming in a straight line from the end of Thung.
According to Howard Limbert, who was a member of the 2010 team and is caving technical director of Oxalis, it took the team members eight years to identify where the current inside the passage led and they finally decided diving into the passage would be the only way to have the answer.
Limbert estimated the diving mission would be tough, as a large water volume from the Son Doong River pouring into the passage would make the current extremely strong.
Oxalis worked with the Phong Nha-Ke Bang National Park to organise the mission and the company sponsored US$53,000 for all the mission expenses. Oxalis described the diving missionâ€™s members as the best divers in the world but Limbert cautioned that the job would be extremely risky.
The mission commenced on April 1, when the experts believed that the Son Doong River was in ideal conditions for diving. Water level inside the passage in April was 40m deep. Oxalisâ€™ boss Nguyen Chau A said he expected the passage would prove to be the connector between Son Doong and Thung caves. If the two caves were one, Son Doongâ€™s overall volume would be over 40.4 million cubic metres. The â€˜expandedâ€™ Son Doong would be bigger in volume compared to the Clearwater Cave.
Clearwater Cave is part of the Grunung Mulu National Park, which is located in Sarawak, Malaysian Borneo. Clearwater is 39.5 million cubic metres in volume. Son Doong is 9km or 5.6 miles long, and with the 67.2m passage, the caveâ€™s overall volume is 38.8 million cubic metres. Thung Cave is 3.3km or 2 miles and with a 22m estimated passage, it has overall volume of 1.6 million cubic metres. Prior to the April mission, the duration of the task had not been known Oxalis also organised a task force, including porters and supporters familiar with caving inside Son Doong as well as trekking in the forest. The team members were trained by experts from the British association and have worked in the job for over a decade.
They carry oxygen tanks, compressors, and camping equipment as well as supporting the mission team members until reaching the passageâ€™s entrance.
Oxalis had strict guidelines to ensure the ecosystem inside the cave would be well-protected, but they welcomed partners eligible for documenting and reporting the incredible mission.
Oxalis also expected the missionâ€™s outcomes would contribute positively to science and the study of karst caves. According to the company, the national flag carrier Vietnam Airlines offered the four British divers free flights to Quang Binh Province, where Son Doong is located.
Members of British Cave Research Association have spent almost 30 years exploring caves in the province. They discovered more than 300 dry caves and caves with subterranean rivers. This was the first time the British cavers and divers exploring an underground watery passage.
Over three decades, the British cavers surveyed and announced systems of karst caves in Quang Binh. The Phong Nha system includes Son Doong, Thung, Phong Nha, Va, and Nuoc Nut caves. The Vom system comprises the caves of Vom and Thien Duong (Paradise). The Nuoc Mooc has caves with water pouring into Mooc stream. The Tu Lan system has Tu Lan, a group of caves and Tien Cave.
Remarkably, the British cavers paid all related expense for the 30-year survey by themselves. Howard Limbert and his partners consider Quang Binh, Vietnam their second home and they have contributed much for Oxalis to exploit Son Doong, Tu Lan and other caves for tourism in a sustainable and eco-friendly way.