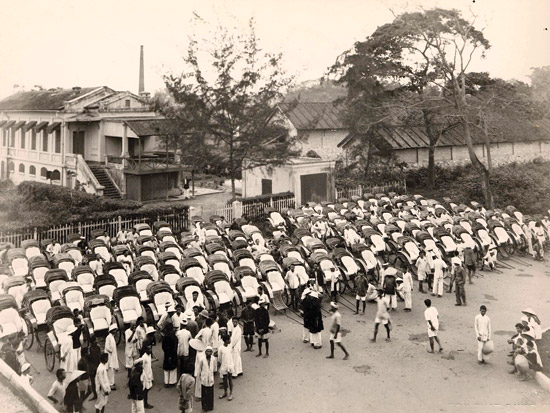 ‘The one I love the best’

I first set eyes on her a week or so after arriving in Vietnam for the first time in 1997. She is a lady with quite a history. I was based at that time in Dong Hoi, another, smaller town in central Vietnam and business would draw me to Hue quite often so I got to know her quite well. That was the year the Saigon Tourist company took control of her, rescuing her from a few years of serving only backpackers. She first opened her doors in 1901 and her glory years lasted up to the departure of the French in 1954. Then, quite understandably, with the mood of the country turning against foreign domination, she ceased to be a hotel. From 1957 until 1990 she was part of Hue University. Even in 2006 a room could be secured here for under 50 dollars. Now, however, she has been restored to her former glory, with a new floor added, providing 53 more rooms. I was recently invited to sample a stay and enjoy the experience of knowing the classy grand dame at closer quarters.
I have been referring to the hotel as if she were a lady mature in years but still retaining grace and beauty. I believe this is fitting particularly as the term â€˜Grande Dameâ€™ is French and this is a place that whilst definitely Vietnamese still very much keeps its French airs. Care and hospitality are feminine strengths well in evidence at the â€˜Morinâ€™. This is a very beautiful building both in its architecture and decoration and these too of course are attributes of the fair sex. Furthermore there is fine food to be enjoyed here and as everybody knows â€˜Motherâ€™ is the best cook. Yes, I know a few feminist guns will try to shoot me down on this but for me they are an extremist element of their movement. They would do well to splinter off and form their own â€˜Femnaziistâ€™ faction in my humble opinion.
The Morin is a tiered oblong edifice. Adding to its femininity it is currently painted pink and stands back just a few metres from the lapping waters of a river called Perfume. Iconic herself she faces another Hue icon the Truong Tien girder bridge. The front ground floor houses a restaurant, souvenir shop and reception. There is also a coffee lounge area with computers for hire at 110,000 dongs an hour. Needless to say in this day and age of the smart phone no one was using them and anyway the back packer area where they charge 2,000 dongs an hour is just around the corner. Saigon Tourist company the owner is a little slow to realise that todayâ€™s traveller regards Internet access as much a part of the package as TV in the room.

From here you pass into a truly beautiful garden courtyard with an imposing Calabar almond tree (cÃ¢y bÃ ng) planted in 1900 at its centre. There are also large colourful ornamental jars with glazed oriental scenes on them as well as bonsais in ceramic pots to remind you that you not in France but Vietnam. In a cordoned-off area at the back as part of the refurbishments there is now a large new swimming pool with paddling pool. There is a poolside bar and a doorway leads you to the beauty salon and spa where you can indulge in all the treatments one can expect of a hotel of this category.
Upstairs the rooms are aligned along classic long corridors. Black and white period posters adorn the walls telling the whole history of the hotel and Hue. There are menus in French, dated pictures of the bridge and river, portraits of the original Morin brothers and their family as well as of dignitaries who have stayed in these rooms. I was particularly intrigued to see an old snapshot of travellers arriving at Hue train station to be met by rickshaws and their pullers. You are reminded too as to how successful the Morins were with faded photos of their hotels in Quy Nhon, Danang and the Ba Na hills. I fell into such a reverie that I imagined Charlie Chaplin coming out of one of the rooms and bumping into me in this corridor.
You cannot of course meet him but I was given the honour of an inspection of the Charlie Chaplin suite. The great man slept here along with newly wedded wife actress Paulette Goddard on their 1936 Orient tour. You step back in time as you enter these rooms. There is a big brass gramophone, dark hardwood furnishings, a well stocked library, four poster bed and many Vietnamese ceramic jars and pots. It even has its own bar stocked with upper-end alcoholic drinks.
The comic tramp had the last laugh staying in this luxurious hotel.
The room I stayed in was of course smaller but befitting of its deluxe category. There was a great view of the bridge and the river with an islet in the distance. At night I watched the crowds milling around the night market on the waterfront. Tea-and coffee-making facilities were included as well as a full range of bathroom toileteries. There was even a mitt and polish for my shoes. My daughter so liked the bathroom that she said she could sleep in it. I especially liked the shiny, wax-polished wooden plank flooring â€“ very European.
There is fine dining at the Morin too. My wife, teenage daughter and I ate outside in the Rendezvous Garden alongside the old tree. We had an eight-course Vietnamese meal that was tip-top. Among the delights were sweet corn and shrimp soup, steamed fish, grilled beef with lemongrass, stir-fried figs with shrimp and pork and stewed chicken with mushrooms. The service was impeccable and, something I have been campaigning for in Vietnamese hotels, there was draught beer with which to wash the delicacies down. My Hue wife, who has earned the sobriquet Madame Epicure, rated the dishes at between 8.5 and 9.5 out of ten.
Sadly I felt that in one way justice was not being done to the chef. The place was rather empty, with only one other table occupied. The reason for this is overpricing in an extremely competitive neighbourhood. Perhaps the warning is in the full name the â€˜Saigon Morin Hueâ€™. Saigon as we know refers to the most expensive square mile in the country-District 1 of Ho Chi Minh city. Earlier in the year one Mr Harald Bathgate in a letter to this magazine eloquently warned that Vietnam could be losing tourists due to this. In this case it simply does not make sense to lose revenue in this way. To press my case further let me give you an example. I was charged 55,000 dongs for a glass of the Tiger draught. A little further down the same street in luxurious surroundings replicating dining in the Imperial Hue Palace I paid 18,000 dongs for the same beer.

One other little foible, which reflects not on the hotel but on the owner, is what the English menu loses in translation. It can be difficult to translate Vietnamese dishes but the â€˜Rice pudding wrapped in banana leafâ€™ had us confused. We thought that ambrosia dessert beloved throughout Europe and the Middle East was about to arrive at the table. They meant â€˜bÃ¡nh bÃ¨oâ€™ which might be better translated as savoury rice-flour cakes. One would have thought a company the size of â€˜Saigon Touristâ€™ would contract a more professional translation service.
Of all the grand colonial hotels in Vietnam the Morin is the one I love the best. It has the loveliest location and it gives a real sense of 20th- century history from the Charlie Chaplin era to the independence struggle. The recent refurbishment has added comfort and more facilities to the place. The Morin for me embodies the marriage of French elegance to Vietnamese charm and top-quality service. A stay here, even it means stretching the budget a little, will add to your experience of Vietnamâ€™s most alluring and historical city.