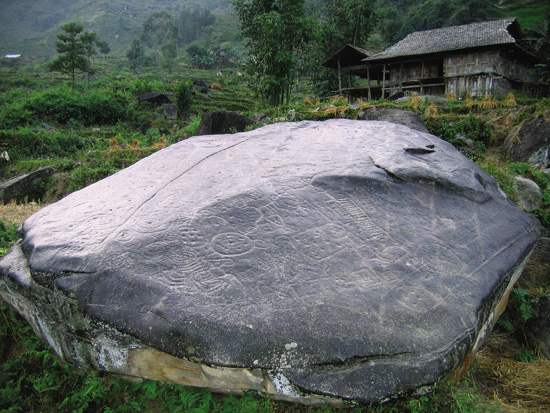 Mysterious rocks in a northern valley

One of the Xin Man Rocks

Vietnam Heritage, March 2011 — There is a group of inscribed rocks called â€˜Xin Man Rocksâ€™ (ÄÃ¡ XÃ­n Máº§n, in Vietnamese, but probably from a local language), in Nung Ma Lu Village, Nam Dan Commune, Xin Man District, in the far northeastern province of Ha Giang, that Vietnamâ€™s Institute of Archaeology says were inscribed about 2,000 years ago.
The inscriptions are on nine large rocks and include representations of human figures, feet and reproductive organs, circles and terraced rice fields.
Also, pieces of rock were broken off.
The Xin Man Rocks were discovered in 2005 and recognized by the Vietnamese Government as National Archaeological Relics in 2008.
They are deep in a valley below where Nam Dan Spring and terraced rice paddies wind around a mountain and small stilt houses, half-hidden in clouds, sit on the mountainside. The houses are the centre of Nam Dan Commune, bordering China.
The people are of five ethnicities: Nung, Hmong, Chinese, Kinh and Tay. The Nung make up most of the population, with 2,724 people in 470 households. The commune consists of 12 villages, ten entirely Nung.
The Nung, who have been living there the longest, believe the universe is made up of three parts: a holy fairy world, a world for human beings and an underground. Their pantheon includes their ancestors, a kitchen god, forest god, spring (water source) god and rock god.
Nam Dan (Náº¥m Dáº©n), where the inscribed rocks are, is the only commune among a number in the area that worships a rock god. On the second day of the sixth lunar month, people set up an altar at the inscribed rocks to worship the rock god.