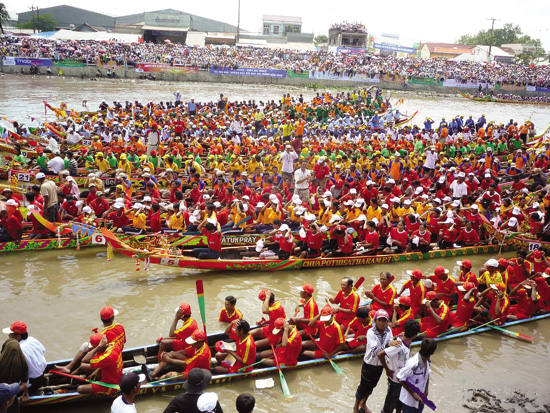 The naga boat, a value-added Hopea

Vietnam Heritage, September-October 2011 — According to the Buddhist calendar of the Khmer people in the Mekong Delta, on the full-moon night of the _last month of the year [which falls on or next to 10 November, 2011], a festival is held to express gratitude to the Goddess of the Moon, the protecting divinity of the harvest . An oar boat race is held between teams from around the Mekong Delta. Every year I participate in this celebration of thousands of people.
When I was at school my Khmer schoolmates Long and Sok were selected to race, and not me. I ran up to Mr L?c Nguyên, the head of the racing association, and asked why. I said I was strongly built and more powerful than them. The monk explained that racers needed to have willpower, which came from religious faith. As a grown-up, I understand that what the monk was talking about was superhuman, distilled from deep within southern Vietnam’s Khmers. I recognise this essence of the naga boat race (?ua ghe ngo).
Wherever in the Delta there is a Khmer Buddhist-pagoda there is a whole hamlet or village devoted to naga boat racing.
In my native village, in B?c Liêu Province, the Kinh [native Vietnamese], Khmer and Chinese mingle in marriage and business.
The sounds of pounding of green sticky rice for cakes echo on moonlit nights before the naga boat racing. Girls and boys prepare new clothes, pile firewood and stock rice on their boats, which follow the supply boat of the pagoda. From B?c Liêu to the River Vàm Tho, where the race is held, is 70 kilometres. The trip is training for the race, with preliminary, less formal, competition. The arrival of the procession is received with gongs and roars.
According to the Venerable Tang Hung, of Cu Lao Pagoda, Hung Hoi Commune, Vinh Loi District, Bac Lieu Province, the ghe ngo [naga boat] originated from battle boats of Cambodia, Thailand and Myanmar. The boat, 25 metres to 30 metres long, is carved  from the trunk of a Hopea, a genus in the family Dipterocarpaceae. Most pagodas of the Khmer people in the Mekong Delta must go to Cambodia to hire builders and buy a trunk. Mr Tr??ng Hiên, of H?ng H?i Village, in the V?nh H?i District, B?c Liêu Province, was the only builder in the District when he told me the builders had to search for the Hopea deep in the forest. It was as difficult and strenuous as a search for aloe, he said. The tree for a naga boat had to have its buttresses beginning higher than the surrounding Hopeas did, so it would be powerful enough, physically, spiritually and symbolically. The builders set up an altar in the forest and asked for permission to fell. They stayed at the spot and carved through the year.
Each pagoda has its own boat and team. The boat is the property of the hamlet but must stay at the pagoda under its governance. It is needed for a ritual before the race.
A team usually has 46 to 48 members. A leader stands in the bow to indicate the direction. A drummer in the middle keeps the rhythm. There is a helmsman in the rear.
A race attracts 50 to 70 boats.
The Venerable Thích Hoàng L?c, the former head monk of Xiêm Cán Pagoda, in B?c Liêu Province, said that before the 20th century the naga boat race had been only a small struggle between a few pagodas and sometimes there had been only one boat, because at that time the race had been only to satisfy ancient custom. In the 20th it had became a sport as well.n
1. Accords with Vietnam Festivals, by Le Trung Vu and Le Hong Ly, Culture and Information Publishing House.