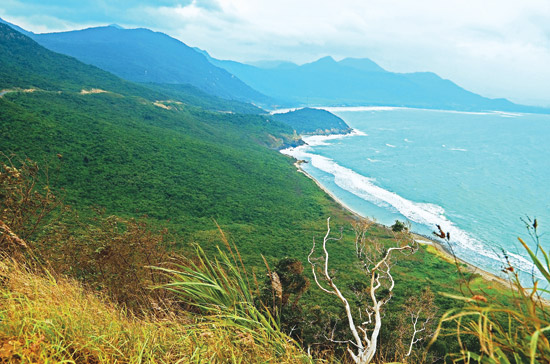 Van Phong Bay, with its beautiful turquoise and aquamarine water, lies nearly two hours by car from Nha Trang, and is protected by Hon Gom peninsula and two islands, which keeps it well away from the flood of visitors that usually descends on Nha Trang. Until recently, Van Phongâ€™s boats were used almost exclusively for fishing, and fishermen seldom quit the net to take visitors on sight-seeing tours.
Recently, I and some others headed for an island in Van Phong. Piloting our sight-seeing boat that day was a middle aged man, who clearly had spent much of his life at sea and his son, who looked more shark than human. Dark and solid, they both used a very unintelligible dialect as they guided the boat out of the harbour and zig-zagged between sand bars to our destination. The beach on the island was full of foreign kids lying on the sun, and a mesmerizingly beautiful girl sat motionlessly, like Andersenâ€™s mermaid on a lone rock amid blue waves.
The island we visited had 11 households, almost completely secluded from the outside world. Fishing boats drop by there before and after long fishing trips. A few hundred yards from the island are the fish and shrimp farms of the locals. Since fish farming came into fashion, the island has lost area primarily due to the hedges emerging from the water.
The boat owner showed us his familyâ€™s farm. Just a scoop of water sparkling under the sun, and one sees fish and shrimp wiggling and jumping. One can buy them for half the price charged in Nha Trang. I idly jumped into the water; it was clear and cool. Tiny fish circled around me, among them were some jelly fishes, half a palm-sized.
Corals and sea anemones slow-danced under the water. They are not as abundant here as near Hon Mun in Nha Trang Bay, but are breath-taking nonetheless. Van Phong Bay is a closed part of the sea, with mangrove and tropical forests and very diverse fauna.
Itâ€™s bliss to swim in the sea without a soul around, without the noise of motors and without a piece of rubbish in the water.
We sat around dinner arranged on nylon and leaves spread on the golden sand. The grilled cuttlefish still had ink in their guts. Grilled snails, the shells burned black, smelled quite sweet. There were fish I never saw anywhere else. The strangest one was called a bull fish, with broad, thin body and eyes protruding out.
There is a well at the centre of the island with a bucket with a long rope there. After dinner, I followed a few new mates there to bathe myself in a prehistoric way.