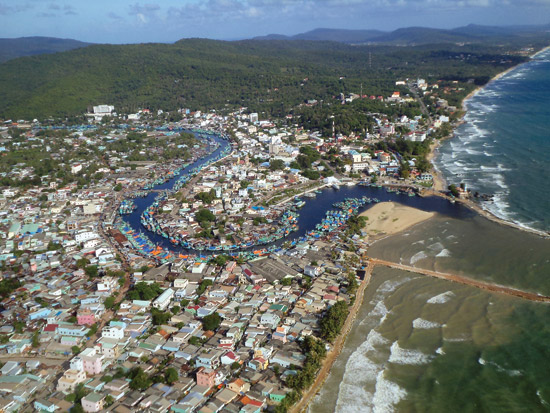 Adventure on the laterite road

This is the second and final part of
John Russackâ€™s day on Phu Quoc.
The first part is in the May edition.

Within a kilometre of the market, the landscape changed most abruptly from bustling town to largely deserted beaches along a narrow, red-dirt road. Near Cá»­a Cáº¡n Beach, the road curved out of a forest into the beach where suddenly a most suspect odour pervaded the thick air. I stopped to inspect long strips of black cloth stretched along the road half in the dusty roadway and half in the grass. What seemed like thousands of tiny grey fish atop this plastic net soaked in the sunâ€™s rays to transform their bodies into edible yet fragrant cÃ¡ kho, or dried fish. Only an hour prior had women selling this pungent treat in the market crossed my path, and here I had unexpectedly rolled up on the source.
The sound of ocean waves swept in to fill the void left behind as I killed the motorbikeâ€™s rough engine. Two conical-hat-wearing women glanced curiously over at me, and I felt almost like a voyeur peering through a window into a forbidden world. For the first time that morning I truly felt like a foreigner so out of place amongst the local people. I smiled and called out â€˜xin chÃ oâ€™, which was met much to my surprise with their own Xin chÃ os and friendly hand-waves.
I took their kind gestures as an invitation to more closely examine their work, and before I knew it was crouched down next to them on a large plastic sheet. They held up fish for me to inspect and engaged me in a conversation I could not follow by words but could understand in spirit. For about five minutes I worked alongside them much to their delight. This truly is backbreaking work, and these women toil tirelessly under that relentless sun while shrouded in heat-soaked clothes. They may never realize it but they gave me new respect for the field labourers who feed this nation.
As I walked back to the road a silver motorbike flew by in a cloud of kicked up dust and a Western couple veered recklessly into the grass to alight at the nearby beach. In their haste to find sun and sand, they had missed an experience with these women so unlike anything found in our Western worlds. I realize we all have different agendas on Phu Quoc, but the local people have such interesting stories to tell. Even if their words seem wholly indecipherable to my English-hearing ears, their message somehow is still fully understood.
The young couple now taking a dip in the blue waters is a prime example of how holidaymakers descend upon Phu Quoc to harvest the sunâ€™s power in an effort to knock away the wintertime blues. Just steps away locals such as the fish women use the very same sun as fuel for their labours. These two worlds seemingly collide within steps of each other with neither world paying much attention to the other.
Newly energised to seek even more Phu Quoc off the beaten path, I set out on roads going from rough to worse. In this area north of Cá»­a Cáº¡n my motorbike met its match on one particularly rocky stretch of red dirt. As destiny would have it, my tire blow out happened right in front of a woman and her elderly mother who appeared to be the only civilization as far as I could see. They rushed up to me and excitedly pointed to their home about 100 metres distant. What are the chances of breaking down right in front of a tire shop in the remotest of remote areas?
If a flat tire is the cost of admission to an experience I will never forget, I hope flattened rubber once again graces a future journey. For such a traditional island, I must admit my surprise that a woman had a background in mechanics and the Midas touch to bring my motorbike back to life. This just goes to show we cannot be so quick to stereotype since reality so many times will turn our assumptions upside down.

Text and picture by John Russack