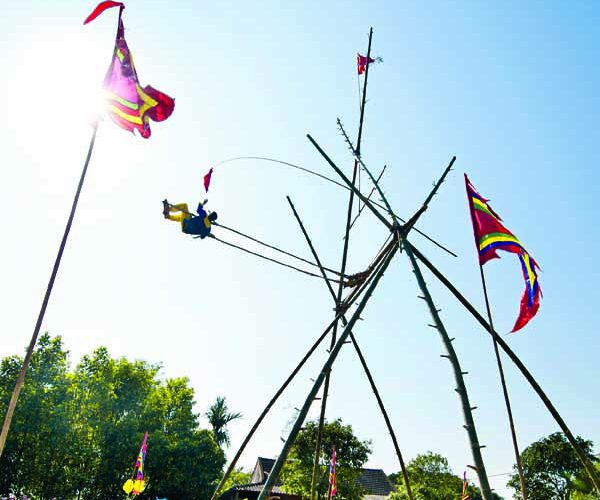 The Daring Yong Men (And Women) On The Flying Trapeze

The daring young men (and women) on the flying trapeze

Swinging is an ancient popular game, often played on Lunar New Year and at festivals. It is a form of sport, an entertainment, and a chance for young couple to exchange intimate words. Those who swing feel as if flying like a fairy, so in the old times people called the game ‘fairy swing’.

A week before Lunar New Year or a festival, villagers select big, long, straight and strong bamboo poles to build a swing frame which include a buttress, hand rails (for safety) and a platform. The strong buttress is set in the middle of a flat ground or a village temple courtyard.

On the festive day, people gather around the swing buttress at the sound of drum beats. The swingers come out to greet the spectators and stand in line waiting for their turn under the cheering of the crowd and the vibrant beat of drums.

As the players flex and sway, they fly higher and higher. Their skill is measured by the maximum height they can reach. Some players or couples can even make complete 3600 rounds. The game is quite extreme and dangerous so the players must have strong hearts and stable minds.

The most popular ways to swing is alone or in a pair. Female singles show the subtleness of a female figure in ancient traditional dress. Male singles show off strength, firmness and the kind of resoluteness usually attributed to men. Male couples stand out by the unison of movements. Female couples make one’s dreams soar.

But the most beautiful and attractive are the male-female swing couples. As they stand facing one another and looking at one another in the eyes, spectators applaud them thunderously. The applauds and cheerings grow even wilder when they sway gracefully, harmoniously flying higher and higher.

The most typical fairy swing game sites include: