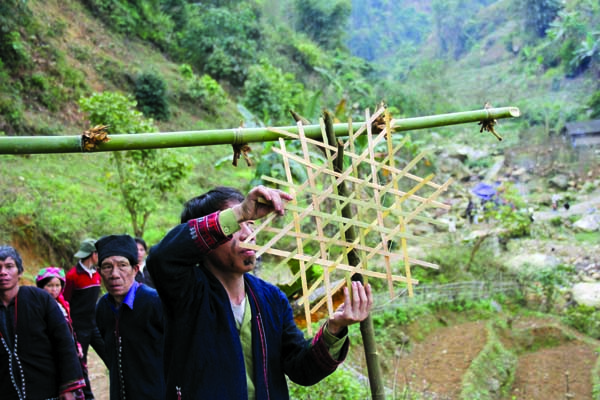 The Village Sweeping Rite of the Xa Pho people is a folkish religious activity that takes place in the 2nd lunar month to drive away bad luck, diseases and evil spirits and to welcome good fortune. Recently, we had a chance to witness the ceremony village sweeping rite of Xa Pho people at Nam Sang village, Nam Sai commune of Sa Pa district.
Two weeks before the ritual day, heads of households are invited to a meeting chaired by the village shaman, to discuss the contribution amount for buying offerings and to select the ghost chaser team. This is a team of five, which includes the shaman and four men with smeared faces: one carries a flat basket of offerings, one bullets, one a sword, and one a broom to sweep the village and to drive the ghosts away. The offerings include pig, dog and chicken meats (three lives) offered to the ghosts so they wouldwill go away from the village and take the diseases and bad luck with them.
Shaman Vang Ghi Nho relates that, on the day of the ritual, his four disciples (those who learn to become shamans) gather at his house to prepare for the rite. They make a wooden gun, a sword, a bow, arrows and bullets, and collect grass to feed the shaman’s horse, which will lead the ghost chasing team through the village from one end to another. They go from one household to another, starting from the shaman’s house and then down to every other. without missing any house. At every house, the shaman takes a seat at the ancestral altar and reads the incantations to order the ghosts to go away together with the diseases and bad luck. Then he strikes a black-purple cymbidium leaf on the walls around the house, down to the kitchen and the back door. A ghost chaser plants a “no entry” sign while the shaman spews water to chase away the ghosts, and closes the back door and attaches sharp leaves to it to prevent the bad ghosts fromto entering thatis way. The shaman’s followers make fierce faces, throwing bullets around, and striking the wooden sword on the pillars and making scary sounds to scare the ghosts out of the house. They push all the ghosts to the creek by the road leading into the village, and out of the village.
Having driven the ghosts out of all houses and away from the village, the shaman initiates a consecration ritual at the village gate. The main road leading into the village is always built by a creek because the Xa pho people believe that the water will cleanse away impurities. The gate is built with two big bamboos poles planted on two sides of the road and one bamboo attached to them horizontally at the top. The shaman hangs a bamboo screen on the left pole facing inward the village, meaning to announce that a sacred event is going on and exitingit is forbidden for three days.
Offerings are arranged on banana leaves at the village gate to be sacrificed to the ghosts. These include 12 chickens, 12 bowls, 12 pairs of chopsticks, dog jaw bones and pig jaw bones. The sword and gun are planted pointing outward, meaning to prevent the bad ghosts from entering the village. The shaman burns 12 bunches of incense, fixes them on the chickens and reads an oration of incantations to chase away the ghosts of the streams and forests, the diseases and bad luck, and to pray for peace, health and growth for the village, its people, and the animals and crops they grow, etc.
As the ritual finishes, the food including cooked rice, dog meat, pork and chicken is spread on banana leaves for the villagers to feast. This is an occasion for the village fellow affections to bond. The shaman’s tray is the first one, near the consecration altar at the gate. Following are trays of villagers which form a long, straight line. The shaman’s tray has only pork and chicken. Other trays have also dog meat. beside pork and chicken. As they sit down to eat, the shaman checks a chicken foot to tell the fortune, to predict if business in the following year will be better than last year. A Red bone is a good sign, black is a bad omen. The attendees must eat all the food within the day. They must not take the left overs home because the ghosts would follow them and harm the people, animals and plants belonging to the household. After everybody has left, the shaman uses bamboo branches to pin dog tails and ears on the ground to guard against ghosts. and not to let the ghosts in. He then makes a fire and steps over it to go home. For three days, from that day villagers don’t let others come into their house. After that, everything is back to normal.
Today, the Xa Pho people still preserve their village sweeping rite as a feature of their traditions and culture that reflects community unity, and mutual affection and support. In modern times, this also helps educate young generations and give them awareness and responsibility toward their own cultural identity.