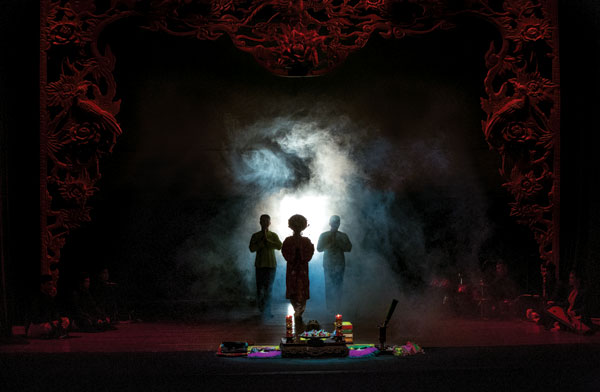 Unesco brings worry along with honour

Delight has come at the end of the year as UNESCO recently tagged the practices related to the Vietnamese belief in the Mother Goddesses of the Three Realms to be included in the list of intangible cultural heritage items of humanity.
The Practice of Mother Goddesses of three Realms is the eleventh item of Vietnamese culture awarded with an UNESCO status and protection since 1993.
Mother Goddesses of Three Realms’ practice has been a tradition in the country and it reflects spiritual needs of local people as well as daily wishes for health, wealth and fortune.
The Three Realms are said to originate from the legendary, mysterious figures of Lieu Hanh, who was a nymph who descended to earth and lived as a Buddhist nun; Au Co, who was an immortal mountain fairy and gave birth to the Vietnamese ancestors; and Vuong Mau, who was the legendary Mother of Saint Giong.
The Realms represent deities of heaven, water, and mountains and forests. These have stayed closely with historical and mythical legends in the 4,000 years of Vietnam’s development.
The belief’s practice has been conducted continuously in almost all northern provinces since the 16th Century. The worship of Mother Goddesses in general is said to be part of the tradition among Vietnamese people of showing respect to their mothers.
According to the Department of Cultural Heritage’s director Nguyen The Hung, the practice of Mother Goddesses provides a basis for social relations, connecting members in the communities. ‘The worship of Mother Goddesses contributes significantly to the appreciation of women and their role in society’, he said.
One of the dominant activities of the belief’s practice is ‘hau dong’ or ‘to mount the medium’, a ritual in which practitioners become mediums and carry out actions controlled by deities in the human world. Practitioners include temple guardians, ritual priests, spirit mediums, mediums’ assistants, musicians, disciples and lay adherents.
The guardians take care of the temples, offer daily incense and flowers to spirits, instruct worshippers and pilgrims in ritual acts and play an active role in organising spirit possession rituals and festivals. Priests perform ceremonies, which involve conveying the wishes of the devotees and communities to the Mother Goddesses and spirits through prayer and petition sheets.
Male and female spirit mediums are initiated before performing the spirit possession rituals at the temples. Each spirit possession ritual consists of five 36- spirit incarnations, and each spirit has its own costume, dance, songs and offerings.
Throughout the spirit possession rituals, a band of musicians perform the songs for spirits.
Following the UNESCO status, however, a fresh controversy has broken out in the press as well as on social networks. Many misunderstood that hau dong had been recognized as a UNESCO heritage item, which helped to create the impression that superstitious variations of hau dong are not ‘indecent’ any more.
The superstitious versions of hau dong are popular around the country when people are trying to make use of the belief to do business and make profits, which is not controlled by market elements and creates huge waste for the social economy. Wrongful practice of the belief causes negative perception of Vietnamese traditions and culture among younger generations as well.
Dr Le Thi Minh Ly, director of the Centre for Study and Promotion of the Belief of the Mother Goddesses of Three Realms said the recognition by UNESCO was aiming to preserve cultural values of the belief as well as attempts by the communities that practice the belief traditions through succeeding generations.
Ly, who is also a member of the National Committee for Cultural Heritage, said: ‘The primary value that made UNESCO honour the Mother Goddesses of Three Realms practice was the custom of worshipping the deities representing nature, including land, water, fire and flora.’
Other figures that have been worshipped together with the deities were legendary figures or real historical figures and this helped to show the appreciation of Vietnamese people towards the contributions of the predecessors to the country.
The honour was given thanks to the compound performance art that is comprised of music, songs, dance, costumes, musical and performing instruments as well as traditions of areca nut chewing, wine offering, incense burning, and gestures performed by the practitioners of the belief.
Practice of the faith was conducted in an order similar to a professional play that is performed in single stages with a harmony of gestures, music, lyrics, rituals, costumes and instruments.
The belief’s practice also showcases skillful crafts of sculpture in worship buildings, tailoring and embroidery, and wood and terracotta carving.
‘So far, the UNESCO status was not to honour the belief itself, but to award the creativity of the communities as well as the preservation of the belief’s practice for almost five centuries,’ Ly said.
Ly recommended building up measures to prevent unexpected consequences from misunderstandings of UNESCO’s recognition of the Practice of the Belief of Mother Goddesses of Three Realms.
She added that authorities should clarify to the public the real values that UNESCO honour and prevent the misuse of the belief’s practice. Ly also wanted an education campaign for the public as well as a scheme to get worshippers to educate each other about the real values of the belief and its practices.