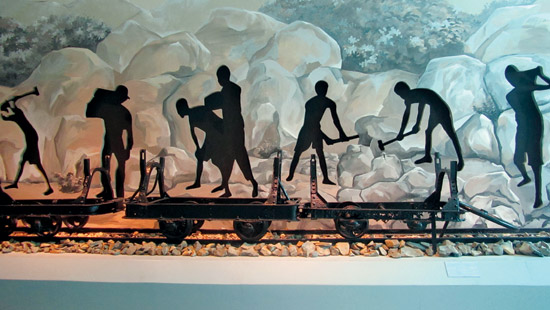 If you are flying into Con Dao, be sure to order a window seat. The approach to landing is spectacular as you bank over the two of the largest outlying islands and abruptly land on a runway that occupies the entire length of a narrow neck of land. You will get a good view of Cay Bang town, the largest settlement nestled in the widest bay with a backdrop of the dark verdure of thick mountainous forest which has been declared a National Park.

If you are reading this is in Saigon or in Hanoi, you might well judge this paragraph to be the stuff of fantasy. But there does exist in Vietnam a town so crime-free that people leave their motorbikes and front doors unlocked. There exists in Vietnam a town, albeit a small one, so quiet that at midday, that you can stand in the middle of a major thoroughfare without a single vehicle passing you. In Saigon, there are whole districts without a single green space. This town has well- tended gardens around pagodas, museums, its market and its beachfront. Furthermore, any pollution is dissipated by the constant sea breeze that wafts over it.
Malabar Almond Tree Town (Thi Tran Cay Bang) is the translation of the befittingly pretty name of this urbanisation. Some of eponymous trees have blue plaques on them announcing â€˜Vietnam Heritage Treeâ€™. The stunning setting of wide bay views, town beaches and mountain backdrop is reminiscent of more famous places such as Rio de Janeiro or Cape Town.
It had been four years since my last visit and there had been a number of changes. The town now has traffic lights-not that the number of vehicles justifies this. The local motorcyclists sometimes just do not quite seem to know what to make of them, but then again, the same thing could be said of those of Saigon! One set at a T junction next to our hotel is permanently set at amber-superfluous and as if the Highway Code did not exist.
In recent years, Con Dao has been acquiring something of a jet set image-a reserve for the rich and famous. In fact, the opposite is true. It is now more open to all pockets than it ever has been. When we first started to visit in 2002, there were only three real hotels to choose from. Back then there were only three flights a week. Now, there four or five a day. The locals have responded by opening up a half- dozen mini hotels and guest houses centred around the market. Some of these get very good reviews on tourist web sites and a decent clean room can be had for 300,000 dongs a night.

Another new thing for us was the Night Market, which has sprung up on an otherwise unfrequented street. We took a stroll to it for dinner one evening. Unlike in Saigon, here you can walk freely without fear of falling into a pot hole or having to clamber over thoughtlessly-parked motorbikes. However, at one point, grazing cows did block the way. The night market itself is clean and hygienic. The only parked vehicle we saw was the portaloo. There were stalls selling various noodle soups, roast duck and various shellfish and seafood dishes, and we opted to patronise the stall of a woman familiar to my wife on previous trips from the day market. We ordered a whole chicken and my wife worked with the owner to ensure it was served with salad and finely chopped up according to central Vietnamese tastes. This, together, with bowls of hu tieu the signature beef noodle soup of the South, plus copious drinks served a family of four. The bill was around a mere 500,000 dongs. (just under $25).
Something else that was new is that the island now has a taxi service. This is quite useful for the airport, which is twelve kilometres from town if you are not staying at a major hotel, which will have its own transport. In the past, our hotel provided bicycles, which given the short distances in Cay Bang, was ideal. Now Saigon Tourist, its owner, which despite the name is Hanoi-owned, has withdrawn these, as it owns the taxis. Seeking out the best Vietnamese cuisine on the island a taxi did come in useful, however, to get to the Vietnamese Kitchen at the Six Senses Resort a few kilometres put of town.
The ‘Vietnam Kitchen’ is open air and you watch as a lady chef from Tay Ninh, wearing her conical hat, wields her wok and stirs her pan to serve you up famous Vietnamese dishes. We had ‘banh xeo’, the most crispy golden or country pancakes I have ever tasted in seventeen years of living in Vietnam. We also enjoyed a truly exceptional Pho beef noodle soup as well as ‘banh uot’ small rice cakes with finely minced shrimp.
I can not finish without praising the Con Dao museum with its exhibits on wildlife. The history of the islands from prehistoric times and the full grim story of the era when this was the Vietnamese Devil’s Island. The old museum housed in the historic Governor’s Palace is now the town’s gallery.

Cay Bang truly is the loveliest of Vietnamese towns. It is well planned, very clean and there is no hectic hustle and bustle. Whilst very small, it has the fine cuisine and cultural life of anywhere in the country. Finally, in short it has everything that is beautiful about a town without dangers or annoyances. Why not go yourself and enjoy it while it lasts?