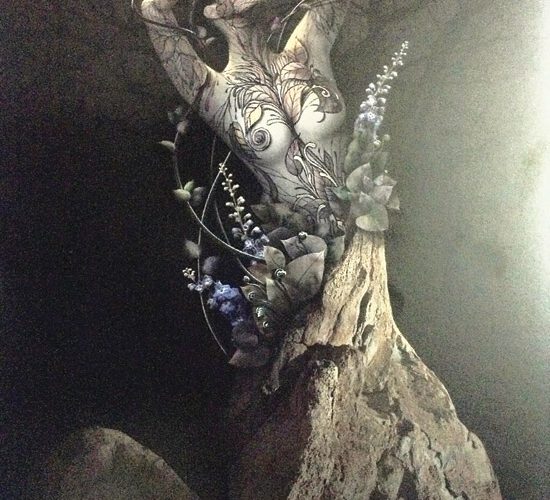 In Vietnam, the art of photography is confronted with difficulties due to problems associated with refined customs and habits, traditional culture, and moral barriers. Nude photographers must furtively ply their trade, or, as Tran Huy Hoan has said, engage in ‘guerrilla activities.’ Consequently, there is an absence of true professionalism. Photographers have endeavoured to overcome this through creations unique to Vietnam. If the background scenes are not shot in hotel rooms, then they are photographed in desolate places-deserted islands and wild forests-devoid of passers-by. Those accompanying the photographers are not lighting and imaging assistants or choreographers who direct the models, but rather helpers who ‘stand guard’ so that no one passes by during a shoot. As for the photographers, they must take care of everything themselves, from choreographing poses for the models to adjusting the lighting and setting up the background and props. Thus, it is very difficult for them to achieve beautiful photographs. Photographs of an artistic nature that convey profound meaning are even scarcer. When the trend in nude photography is to not only take photographs that capture the curves and beauty of the female form, but also to augment them – at times, they are more suggestive than showy and at others, they display stark nakedness – but regardless of what form they may assume, latent in the nude photographs of are contemplations about life that convey a heightened sense of humanity. And yet, Vietnamese photographers follow worn-out ways. Although they strive to create novel scenes for the photographs like straw, stubble, mist, and even automobile garages and livestock pens, they remain preoccupied with the ‘curves of springtime,’ flaunting youthfulness, and fail to give shape to any profound thoughts on contemporary life. Hence, when placing a Vietnamese nude photograph next to a Western one, the difference is often readily apparent and, for the same reasons, Vietnamese nude photography sinks to a point where it is hard to distinguish between art and vulgarity.
Aside from the nude models reserved for the students of fine arts schools, in Vietnam, at present, there are no professional models. Almost all of the nude photographers’ models are acquaintances of the artists or people who, by coincidence or by fate, happen to have a predilection for taking nude photographs; there are even models who are the photographers’ wives, lovers, or prostitutes. In skilled hands, a photograph possesses spirit, thoughts, and a story, so that it becomes a beautiful work of art with meaning. However, in Vietnam, there is an absence of professional models and the knowledge of the craft of modelling and portraying of the body. Thus, there is a disconnect between models and photographers. Models fail to grasp the intent of the artist and cannot manifest what the artist wants them to embody. Another issue is that the photographs are frequently taken secretly and in a ‘hit and run’ manner, against background locations that are hardly accommodating and free, and lack the atmosphere for models to be able to feel sublime and in tune. Therefore, many nude photography shoots fail, in spite of real sweat on the part of both the models’ and the photographer.
Perhaps owing to the influence of traditional morality and eastern culture, the Vietnamese public still lacks a pressing demand to view nude photography exhibits by Vietnamese photographers.
The Internet has sated the populace to the point of saturation; they can view nude photographs of all kinds, from nude art to nude pornography and erotica. For the majority of the Vietnamese populace who concern themselves with nude photography, it is relegated to personages in the world of Vietnamese showbiz. They look at nude photographs in order to satisfy their curiosity, to see whether or not some girl’s proportions are up to par, or which part is most alluring, or where are the sudden artificially developed ‘mutations.’ They are largely unconcerned about what the artist wants to say, what ideas he wants to embody, and what stories he wants to tell, irrespective of whether the model is photographed nude with leaves and flowers or is tossing about in a pile of hay, exposed in a greasy car garage, or atop a forlorn rock on a deserted island or beneath a gushing waterfall. Another aspect is that the Vietnamese people have many different degrees of artistic sensitivity. Not everyone properly comprehends nude photography so as to be able to recognize whether art is decent or crass. For the populace, whether or not to have nude photography exhibits is neither consequential nor detrimental, since nude photography or any other form of graphic art is simply for recreation and relaxation during leisure time.
Hence, to some degree, perhaps the demand for nude photography rests solely with the nude photography artists, who want to display the fruits of their artistic labour, as well as to satisfy their artistic individuality as they hurl themselves into this extremely difficult realm of photography.
Regulations for photographic activities were demanded by the Ministry of Culture, Sports and Tourism back in March 2011. Since September 2011, the Department of Fine Arts, Photography, and Exhibitions has solicited the opinions of agencies, organizations, and individuals on its website to be included in the debate. The Department of Fine Arts, Photography, and Exhibitions has also resolved to place the management of ‘sensitive photography’ under an individual section of chapter 5.
Meanwhile, a number of models claim to be fond of nudity to ‘preserve the environment,’ but are actually just self-promoting. There are stories about photographers taking advantage of models or disseminating nude photographs on the Internet. Some models even pretend to be photographed intrusively, as there is a prurient interest in the market for candid shots of ‘innocent’ Vietnamese girls.
* Viet Van is a well-known photographer in Vietnam