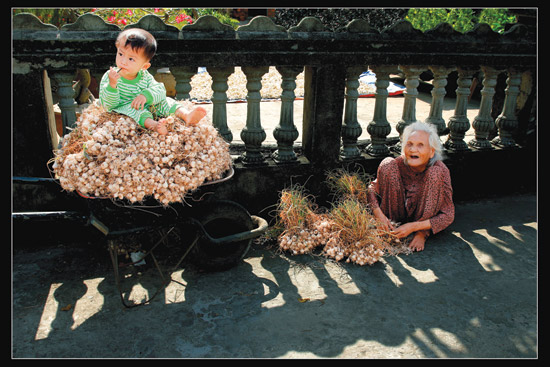 The aroma of the soul

In recent years, a number of newspaper articles have been written about Ly Son, which often stated that Ly Son, Quang Ngai Province is a â€˜spiritual kingdom,â€™ â€˜garlic kingdom,â€™ and an â€˜island of civilizationsâ€™.
According to the information from the administration of Ly Son, about 3,000 years ago, prehistoric people of the Sa Huynh culture lived on Ly Son Island. Next, the Champa civilization developed at the beginning of the Common Era until around the end of the sixteenth century, when Vietnamese people founded a village on the island.
Materials from the Ly Son Cultural Office relate that the area of Ly Son Island is only 9.97km2, but it has over fifty religious and folk architectural structures, among them three national heritage sites. Perhaps because of the dense concentration of places of worship, whether I was in the residential area, went up the terrace fields, or down to the desolate seashore, I always came across ancient community houses, Buddhist pagodas, and shrines. The landscape everywhere is steeped in spirituality and, moreover, in the words of an elder, â€˜Every week there seems to be a ceremony or festival,â€™ which made me feel that the over 20,000 Ly Son people have as much spiritual devotion as do the people of India.
Meanwhile, the title â€˜garlic kingdomâ€™ is easily understood if tourists come to Ly Son on the occasions of planting, caring for, or harvesting garlic. When I went to Ly Son between the garlic seasons (between the first month and the second month of lunar calendar), I saw that up to 90 per cent of the area of the terrace fields in Ly Son were verdant with garlic leaves. Wherever I went, I heard people discussing garlic. An 80-year old elder said that the garlic growing trade has been in Ly Son for a long time. Perhaps that is why garlic is a part of Ly Son peopleâ€™s lives and culture. This is clearly in their daily foods and ancestral offerings, which are all deeply infused with the colour and scent of garlic. Mr Bay, who is over 60 years old and already knew how to grow garlic since he was little, related, â€˜Ly Son garlic is valuable because it is planted in sand from the ocean and watered with slightly salty water.â€™

Information in the press about places for swimming in the sea at Ly Son is almost nonexistent. When I went up to Ly Sonâ€™s Dock the second time, I continuously asked the local people about the most ideal place for swimming in the sea. â€˜Hang Cau is the nicest place for swimming in the ocean,â€™ a man named Muoi said.
Muoi further related that Hang Cau is on the east of the island, right next to the foot of the highest mountain, Mt. Thoi Loi, which belongs to Dong Village of An Hai Commune. Following the directions of a 50-year old man, a friend and I rented a motorcycle for the price of VND150,000 per day and then departed from the dock. In only fifteen minutes, after passing residential areas so dense that they seemed like cities and verdant terrace fields of garlic, we arrived.
Wanting to go into Hang Cau, we went through a narrow path a few meters wide, between a stone peak and the sea. Meanwhile, the surrounding desolate landscape made me feel that it was quite mysterious.

Hang Cau is composed of a rock cliff 40m high, 100m long, curved like a horseshoe and hugs a sandy shore of proportionate length. The width of the sandy shore as calculated from the foot of the cliff to the edge of the water is approximately 40m. It has a lot of moss-covered small pebbles and rocks.
Hang Cau is the most ideal beach for swimming. It can be thus concluded because I have gone all over the Ly Son seacoast and saw nothing but rocky dales.
My friend immediately took off his shirt and then plunged into the small waves that incessantly crashed against the shore. He dove into the clear water, shouting â€˜Fantastic!â€™ â€˜Wonderful!â€™
A man named Quang, whose home is 500m from Hang Cau, related, â€˜Thirty or forty years ago, the fish in this place were innumerable, so many people came to fish them. Moreover, the structure of the cliff resembles the jaws of a frog, so the people here called it â€˜â€˜Hang Cauâ€™â€™.â€™