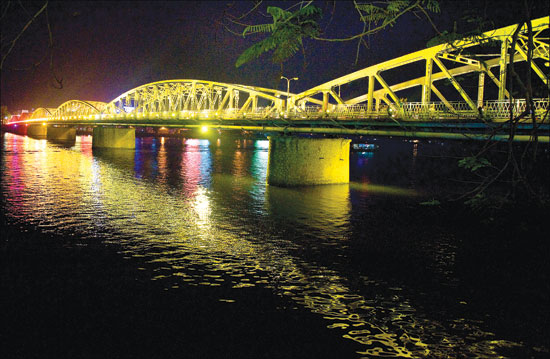 In this watery land of Vietnam, every city has its associate river. Usually, as is the case with both Saigon and Hanoi, the waterway is to one side, but in Hue, it is crucially central. Whether a tourist, businessperson or simply a native, you are bound to cross it on a daily basis. Having said that, I normally visit but once a year, at Tet. Here is the story of my latest Tet spent in the ancient capital. Largely, I visited old haunts, but there were one or two new discoveries and I made a tour of the city’s four-star accommodations, which may be of interest to those readers contemplating or planning a visit
Most who visit Hue see little more than the Purple Imperial Palace and the Royal Mausoleums, but Hue is also one of the better cities to soak up a little of traditional Vietnam. First, let me introduce you to our house, typical of Hue. My wife’s family came to Hue as refugees from the North when the country was split into two in 1954. They were allocated land on the edge of town. Over the years, the family grew and her brother and sisters built houses around them, making a family compound. Our house, based on concrete columns and a tiled roof, is divided into three parts. First, there is the kitchen and bathroom. Then, there is the central living area, a main feature of which is the family shrine. Lastly, to the other side is the sleeping quarters. All very simple, but quintessentially Vietnamese.
Our street, which stretches for over a mile from the citadel, is very famous among Vietnamese. We are proud of the name â€˜Chi Langâ€™, which commemorates the Vietnamese victory over the Mongols (the only nation to achieve this). Here also the mandarins from the Imperial Palace built their houses and their temples. I seldom see a foreigner on our street, but it is worthy of a visit if you are interested in pagodas and temples. Most of them are along the roadside, but take care to see those down the alleyways as well. Take your camera and you will be well-rewarded if you do visit ‘Chi Lang’. Do not forget to try the local specialty ‘Me Xung’, sold in shops at the beginning of the street. This is a sweet, like a sesame snap or a nougat bar.
When my daughter became bored and tired of being harassed by her young nephews, we decided it was time to visit a chic cafe. Rodo CafÃ©, by the new road bridge, is housed in a kind of glass cabin. It is fairly new and its name is akin to the Latin for â€˜wheelâ€™, and might derive from its location being adjacent to the palace. It is on Tran Hung Dao Street, the boulevard that hugs the river and which has some lovely gardens for a promenade. Although the flag on the entrance tower to the palace is clearly seen nearby, there were no tourists at Rodo on our visit. It is very popular with the Hue young set. It is a bit like a home-grown Starbucks, as it serves exotic fruit teas, including a range of Japanese matcha concoctions. It also serves light meals. My daughter had a peach tea and a club sandwich, whilst I opted for an American coffee.

Afterwards, we wandered through a covered alleyway to a street that runs parallel to Tran Hung Dao and for half a mile alongside the citadel moat. It is a great place for taking a photo of the citadel walls and one of its gates. You will not see many tourists in this hidden thoroughfare and the Hue Tourist Board would not be proud of it, as it is quite possibly the poorest street I have seen in Vietnam. We did, however, come across a lone elderly German gentleman seated and enjoying a dish of water spinach cooked with garlic. I asked him how it was. “Very healthy food”, he told me. I told him I practically lived on the stuff, to which he responded, “That is why you look so well.” Despite the poverty of the street, this was the third day of Tet and there was a lovely festive air about it; every few metres outside there were little gatherings of friends and all the houses had their front doors open, revealing families enjoying themselves.
As my brother intends to visit the ancient capital next year, I went to visit Hue’s four-star hotels in order to choose one for him to book. If you are also planning a trip to Hue, you should read on. There is currently an oversupply of hotels in this category, resulting in perhaps the cheapest luxury rooms you will find anywhere; from forty to sixty-five dollars per night, including full buffet breakfast for two. They are all in the main hotel area with all the facilities you will need; if you tire of hotel food there are Italian, Indian and French restaurants nearby, as well as places to pick up a hamburger.
All of the places I visited had great rooms, typically with white bed linen, parquet flooring and dark tropical hardwood furnishings and with great views of the river and citadel from the upper floors. Whilst I am not going to recommend one above the pack, I can assure you none of them will disappoint you. Five of them are tower blocks. ‘The Muong Thanh’ and the not-so-aptly named ‘Midtown’ hotels have the clearest views. ‘The Moonshine’ could win the best lobby prize and you might want the King Suite on the top floor for a little under a hundred dollars a night. It even has its own private garden with a little stone path. â€˜The Eldoraâ€™ is the newest and is beautifully decorated in classical European style. It is further back than the others and has only distant river views, but more than makes up for that with great vistas of town, mountain and verdant rice fields. It has a magnificent top floor indoor swimming pool.
With the river lapping its premises is the ‘Huong Giangâ€™ I suggested to the sales manageress adding the English translation-‘Perfume River’. This was looking a little run-down when I last saw it, but since then, there has been a brilliant refurbishing and this grand lady is looking now very attractive with rattan furniture everywhere-even the reception area is adorned with the material. This is the largest four-star and consists of three large blocks. It was so popular that it was fully booked this Tet and all they could show me was a suite.
In short Hue with her beautiful river is more than history. With her excellent affordable hostelries she is ráº¹juvenating.