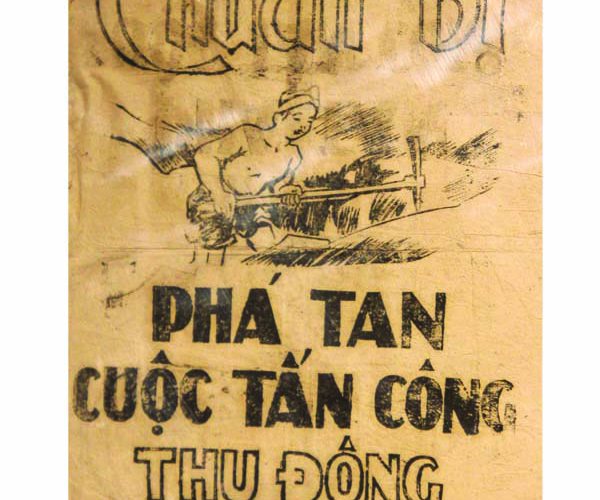 No. 1 of ‘The Avantguard’ Journal, the new culture propoaganda organ of the Vietnam association of patriotic culture experts, published on 10 November, 1945.

A portrait of Uncle Ho with three kids representing the North, Middle and South of Vietnam. Blood painting on silk by Diep Minh Chau, 1947.

The song ‘Marching on Hanoi’ by Van Cao

In February 1943 at the Meeting of the standing committee of the Indochinese Communist Party’s Central Committee, ‘Draft of the foundations of Vietnam’s culture’ the party’s first political guidelines on culture written by the General Secretary Truong Chinh was debated and passed. This is a historical document that shows principles and directions for building a new culture – the revolutionary culture.
The draft highlights the Party’s standpoint and basic philosophy as related to culture and arts. It puts forward three principles to build the new culture: nationalist, popular and scientific. Culture is one of the three main frontiers; the economy and politics being the other two. In parallel with political revolution, cultural revolution must be conducted. Only being in control of the cultural movements can the Party control the public opinion and will the Party’s propaganda be effective.
The Draft’s ideological content has correctly and timely reflected the demands for building a revolutionary culture, and is the important guideline for giving birth to new culture and arts of Vietnam.
While the August Revolution was being celebrated, while a myriad of complex things are to be built, while the new Republic immediately faces new perils in the face of internal and foreign enemies, the Party and Uncle Ho went on establishing a new government, which means not only developing the economy, building democratic institutions, but also strengthening the foundations of new culture based on traditional values of the people, in order to defend the independence and affirm the power and the master status of the people.
At the first National Cultural Congress that took place in Hanoi capital on Nov 24, 1946, Chairman Ho Chi Minh said, ‘Culture lights up our nation’s way’. That shows that the Party and Uncle Ho highly appreciated the guiding role of culture in the nation’s development and the revolution movement.
Exhibition ‘Literature and art in the war of resistance (1945-1954)’ has highlighted the Party’s and Chairman Ho Chi Minh’s policies and ideology on cultural revolution.
Almost 200 images, documents and artifacts from the collections of the National Museum of History and Vietnam Literary Museum at the topical exhibition ‘Literature and Arts in the war of resistance (1945-1954)’ are showcased in 2 parts:

Part 1, The Draft of foundations of Vietnam’s culture and the Party’s policies regarding culture
‘Draft of foundations of Vietnam’s culture’ appeared at the time the Vietnamese people endured the exploitation of both the French colonialists and the Japanese fascists. They not only exploited us economically, but also poisoned us culturally by deception, demagogy and fake democracy. In such circumstances, Nguyen Ai Quoc came back to the country and decided to establish Viet Minh Front. He wrote letters to the fellow countrymen and women and published ‘Independent Vietnam’ newspaper to spread ideas, to lay bare the enemies’ conspiracies and crimes, and to call the people to be united in Viet Minh to fight away the French and the Japanese.
In 1943, the Viet Minh movement grew quite strong in the countryside but remained not so visible in the cities because it had not mobilized and recruited the intellectuals, especially the writers and artists to the unified national patriotic front. To fix that situation, the General Secretary Truong Chinh had written the Draft of foundations of Vietnam’s culture and at Vong La Commune, Dong Anh, Han?i, the Meeting of the standing committee of the Party’s Central Committee that took place on Feb 25-28, 1943 passed it.
The ‘Draft of foundations of Vietnam’s culture’ printed in no. 1 of The Avangard Journal, the New Culture propaganda organ of the Vietnam association of patriotic culture experts, is currently kept at the National Museum of History.
As a coincidence, while the ‘Draft of foundations of Vietnam’s culture’ was being passed in 1943, Uncle Ho, who was in China, being kept a prisoner by Chiang Kai-shek, took time to think about building a new national culture for the future. The two events, though happening in different places and circumstances, took place at the same time and serve the same purpose and idea.
Immediately after the publication of the ‘Draft of foundations of Vietnam’s culture,’ patriotic intellectuals started actively supporting, participating, and initiating new culture – a revolutionary culture-building movement.
Recognizing the utmost importance of Culture, just one day after the country regained independence, on September 3, 1945 in the first meeting of the cabinet, Chairman Ho Chi Minh highlighted the six most urgent tasks of the Government, two of which were related to culture. First, illiteracy must be eliminated together with famine. Two, the people’s moral must be re-educated.
The Party’s important standpoints on culture, expressed in the ‘Draft of foundations of Vietnam’s culture’ have been complemented and completed by the demands in subsequent stages of revolution. And on each such stage, our Party further improved its policies on culture and arts. The VIII National Congress of the Party in 1996 has stressed: ‘All activities related to culture and arts must serve the purpose of building and developing an advanced culture, rich in national features, and creating a Vietnamese personality in the aspects of ideology, moral, spirit, emotions, lifestyle and establishing a healthy cultural environment for the development of the society.’
At the 5th meeting of the Central Committee (VIII term) in 2014, this policy was one step further improved to assert that ‘Culture is the foundation of the society, at the same time the motif that accelerates socio-economic development.’
These reliefs were made by artist and stage and film director Phan Tai. In his lifetime, he made hundreds of statues and reliefs that recorded the faces of the top people in the literary and artistic world of Vietnam.
The exhibition also quotes remarks and assessments of scholars, culture experts, writers and artists on the ‘Draft of foundations of Vietnam’s culture’ that have been published in books, journals and some of the Party’s documents related to culture, literature and arts.