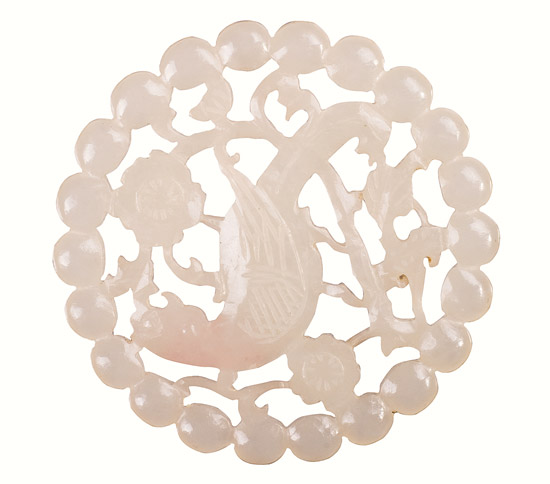 The following information is from the National Museum of Vietnamese History’s Vietnamese Ancient Jade, 2011.
Jade identity cards ???? and ???? were very special cards. On two faces of the identity card ???? is a stretch-tail dragon motif, and on the handle of one card were carved characters dating from the 5th year of Thieu Tri’s reign (1845). The gold-plated characters ???? identify the card as a King’s order to royal nobles.
A smaller, white jade identity card was decorated with two stylized dragons and a rectangle motif. On the card’s faces are three Chinese word lines. This card was one of the identity cards from Thieu Tri King’s period (1841-1847).
Two white-grey jade identity cards have holes in their handles. The long rectangle-shaped jade card was carved with a recurring ‘T character’ decoration on one face. On a different face were carved two whirl-tail dragons flanking the moon.
Ornaments are pieces of wearable jade. One such ornament, a white jade object, is flat and round and has holes, as well as bird and flower motifs. The red jade object features a carved bat and the character for longevity (happiness and long life).
Domestic jade objects originating from Hue Imperial royalty come in different types, such as glasses with ivory white jade rims and round eyeglasses made of gold. Jade utensils include: chopsticks, spoons, soup ladles and forks. Some of them are both white jade and silver. There are two white jade flutes with ten holes similar to bamboo flutes. A grey-white and celadon jade Chinese chess table features one side with celadon jade chessmen, each one having two faces ground into them, along with their titles; general (Tuong), intellectual (Si), elephant (Tuong), cart (Xe), cannon (Phao), horse (Ma) and soldier (Tot). The opposing side is carved from white jade, but there are small changes in the general, elephant and cannon. The chess characters were inlaid with gold. Perhaps those chess was used in Royal palace of the King in the Nguyen dynasty.
Some white jade pictures were carved on two faces with landscapes, mountains and rivers. Others depict castles and human figures from Chinese legends, but with different ideas from the Nguyen Dynasty about how to represent flora and fauna (for example, pine leaves are not rounded).