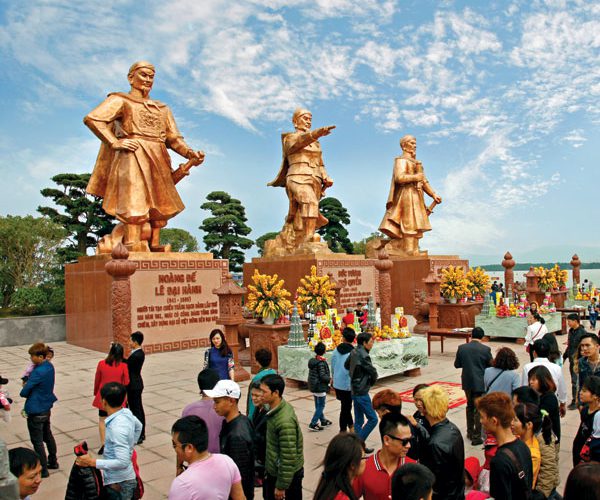 The solemn spirits of war and heroism

A mock-up of a naval battle on Bach Dang River

Located at the estuary of Bach Dang River, just 20km from downtown Hai Phong Bach Dang Giang relic site (Trang Kenh – Thuy Nguyen) has become Hai Phong’s largest complex of historical, cultural and spiritual monuments, as well as an attractive tourist destination.
Bach Dang estuary is a special place, the site of three great naval clashes, a symbol of the spirit and heroism of a small nation that fought for freedom multiple times against stronger aggressors.
The first battle took place in 938BC, when the Southern Han’s 20,000-strong navy, led by Hoang Thao, attacked us from the sea. When the news came, Ngo Quyen gathered his generals and prepared to fight the enemy. He instructed his troops to sharpen one end of wooden logs, cover them with iron, and plant them in Bach Dang riverbed. At high tide, the logs were hidden under the water. Our troops then used hit-and-run tactics to lure the Chinese fleet into the log field.

As the water receded, the Chinese ships got stuck in the ambush. Our men sprang on them from the banks and small boats navigable between the logs. After this victory, Ngo Quyen proclaimed himself King and restored the sovereign nation of Vietnam. The Bach Dang victory was considered our declaration of independence after a millennium under Chinese rule.
In 981, the Song Chinese invaded our country again. Their navy, led by Hau Nhan Bao, came upstream to Luc Dau Giang, lost a battle there and retreated toward Bach Dang. Le Hoan had his troops plant wooden logs on the riverbed to wait for them. Again, hit-and-run tactics helped lure the Chinese into the trap just as the tide went low. Their ships pierced through, their men crushed, even their top commander Hau Nhan Bao killed, the Chinese navy was completely. This was the second Bach Dang victory that eternalized King Le Dai Hanh’s name.
The third Bach Dang battle is attached to the name of Tran Quoc Tuan, titled Prince of Hung Dao, who helped the Tran Kings to defeat the Mongolian Yuan armies. It was in 1288, when Mongolian hordes dominated the world, enslaved China and terrorized Europe. Having been twice beaten in our country, indignant and bewildered, they decided to try a third time.
A tidal wave of 50,000 strong Yuan navy under Omar’s command moved into river estuaries of Hai Phong. History recorded that ‘Great Viet army groups ambushed them from behind caves and rocks, in small rivulets and on the banks of the Trang Kenh and Quang Yen Rivers. The same tactics worked to lure the enemy ships into the fields of sharpened logs for the main force to attack in a major crushing counteroffensive at low tide. Over 400 ships and the commanders Omar and Siragi were captured…’
Many people feel that the remaining relics are not enough to reflect the historical greatness of the Bach Dang victories. With that in mind, some dedicated people have made great efforts to create a complex of monuments to display the grandeur of the country’s spirit.
In just a short time, a series of big projects have been put in place at Bach Dang Giang relic site. First came a group of three big temples attached to the names of the nation’s three great military commanders; King Le Dai Hanh, National Regulator Tran Quoc Tuan (titled Prince of Hung Dao), and King Ngo Quyen. All three temples follow an ancient architectural style and were built with timber and rocks under the shade of age-old trees, along hill slopes and river banks.
A man from Minh Duc township named Mr Vu Duc H. said, ‘Unlike at other construction sites, every year, Bach Dang Giang relic site gets enough investment to have new additions to the complex, fulfilling the aspiration of contributing visitors. As of now, besides the above- mentioned temples, the relic site has also a temple for Chairman Ho Chi Minh, a museum with plans and mock-ups of the three historical battles, a temple of the Mother-of-the-Land, and a Buddhist pagoda above all that. Most recently, a very wide road was completed, which leads to intricately carved stone bridges that add to the monumental grandeur of three majestic statues of the military commanders towering over the river. Beneath them the log fields have also been restored,’
According to the site’s management, in the first half of the first lunar month this year, they have received over 110,000 visitors. This lunar year, besides the Spring festival, the Tran temple Seal Opening Festival on the 14th and the anniversary of King Le Dai Hanh’s death on the 18th of the first lunar month, to satisfy visitors’ aspiration, the relic site will organize many other commemoration ceremonies on the occasions of Vesak in the 15th of the 4th lunar month, Mother’s day on the 15th of the 7th lunar month, and the anniversary of Prince Tran Quoc Tuan’s death on the 20th of the 8th lunar month.

Text by Le Minh Thang and photos by Vu Dung