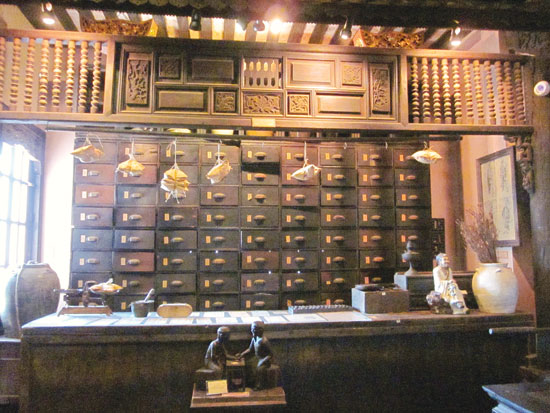 The history of herbs

Fito Museum displays over 3,000 objects, from the Stone Age to the 20th century, involved in Vietnamese traditional medicine. The museum was founded in 2007 by the Fito Pharma Company.
The museum is not an immense and majestic palace with iron fences and security. It features a five-storey house with two bamboo trees in front of its façade.
Inside the museum, I felt intimate with the simple and natural Vietnamese architecture. At the ticket box, I was impressed by a lift overlaid with wood. Also, I was very interested to see drawings excerpted from old medical books and yellow-paper medicine ads from the 1900’s hanging on the walls at the wooden stairs.
The museum is decorated with animal and pattern carvings on wood pillars, rafters, roofs, doors, shelves and sets of tables. Hanging on the walls are carved wood and colour paintings depicting the acts of examining, preparing medicine, prescribing, preparing the herbs and gilded wood paintings featuring famous physicians who devoted themselves to developing of Vietnamese traditional medicine.
Vietnamese discovered plants for treatment diseases in the Hung Vuong Dynasty (2879-258 BC). Vietnamese knew how to use ginger, garlic and other herbs for disease prevention and treatment. They chewed betel with lime and areca to keep the body warm and protect from tooth decay. During the Tran Dynasty (1226-1399), the government organized trips to collect medicinal plants. Also, they planted herbs in Duoc Son (Medicine Mountain), Hai Duong Province, to make medicine. Duoc Son was the first national medicine garden in Vietnam.
From the 4th to 10th centuries, Chinese medicine deeply affected Vietnamese medicine. At first, two branches conflicted with each other. Between the 10th century and the 20th century, they combined together to form Vietnamese Traditional Medicine. At that stage, Western medicine also appeared.

A drawing showing vital points in the arm

One room showed two statues of the greatest physicians Tue Tinh (14th Century) and Hai Thuong Lan Ong Le Huu Trac (18th Century) who were well-known as the founders of Vietnamese Traditional Medicine. As in the past, those who reached the pinnacle of any career would be honoured as a god or saint and so it was with these two. Tue Tinh was a monk and the author of many medical books. At 22, he passed an examination, but he refused to work as a mandarin and went into a pagoda to become a monk and treat people. He began the idea of taking Vietnamese herbs through the statement, ‘Vietnamese herbs for Vietnamese’.
Hai Thuong Lan Ong (1720 – 1791) was the author of ‘Hai Thuong Y Tong Tam Linh’ (Medical origins with morality and skills of Hai Thuong), considered as an encyclopaedia of Vietnamese traditional medicine. On the occasion of 250th anniversary of his birthday, UNESCO recognized him as a world cultural celebrity due to his contribution to traditional medicine and culture of Vietnam and the world. In Hanoi and Ho Chi Minh City, streets specialise in selling traditional medicine are named Hai Thuong Lan Ong or Lan Ong.
One room was an old house from the 19th Century, which was moved from Hanoi. The house was in a northern style, made of wood, tilted roof and with a small, lush garden. Pointing to a bat swinging on the roof the guide told me: ‘Bat faeces can increase sexuality ability in men.’
One room displayed a model of a small wooden traditional pharmacy in the 19th Century, including a cabinet with 81 drawers containing herbs and a counter for preparing herbs with a weight, mortar and pestle, papers and abacus.
Another room showed many things with a variety of shapes, sizes and made of stone, wood, ceramic, terracotta and metals. They were mortars, pestles, lime holders, lime pots, balances for weighing herbs, bowls for taking medicine, wine jars containing tonic wines, coins for ‘rubbing the wind’, boat-shaped drug grinders and medical herb slicer.
At the top floor, one room displayed Cham statues, linga and yoni. The guide told me if one is looking for a girlfriend or boyfriend, they should just touch the statue of linga or yoni, and woman who wants to get pregnant should just pour water on the top of linga, wait for it to flow down the yoni to the base and then drink it.n

Text and Photos by Tu Anh