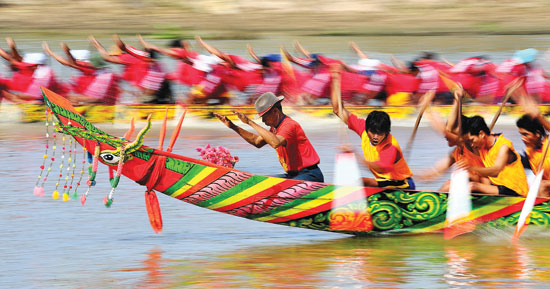 On the full moon night of the 10th lunar month, the Khmer people have their Ok-Om-Bok Festival, also known as the Moon Festival or the Squashed Green Rice Festival.
On the origin of Ok-Om-Bok Festival, research works such as Son Phuoc Hoan’s ‘Khmer Festivals in Southern Vietnam’ and ‘Soc Trang Folklore’, a collective work led by Chu Xuan Dien, agree that it came from the legend about a previous life of the Buddha.
As the story goes, in one of His incarnations, Buddha was a white rabbit living along the Ganges. The rabbit had three friends; an otter, a monkey and a wild dog. The rabbit was intelligent, kind and meditated diligently. He always reminded his friends to fast and meditate on full moon days to keep the body and mind clean and virtuous.
On a full moon day, the rabbit meditated beside his burrow while his friends all caught something to eat. The King of Heaven turned into a beggar and came down to earth. He asked the otter, the monkey and the dog for food. They shared theirs with him but he delayed, ‘Let me cleanse myself before the meal.’

He came to the rabbit and asked for the same. The rabbit said, ‘Please find some timber and make a fire, I will give you food.’ The beggar followed his instructions. When the fire went high, the rabbit jumped into it to grill himself to make food for the beggar. But the fire didn’t kill the rabbit because a wind had blown it off. The King of Heaven showed himself, praised the animals and told the rabbit, ‘I will make example of your great self-sacrifice for people to follow.’ He became a giant and painted a rabbit on the moon. Since then the Khmer people have the Moon Festival.
The Moon Festival takes place in the evening, when the moon shows itself above the tree tops. Simple farmed sacrifices include taros, manioc, coconuts, bananas, cakes made of flour and, of course, there must be squashed green sticky rice. Green sticky rice is roasted briefly and then squashed to remove the husk. Everything is beautifully arranged on a table at the centre of the village square. Everybody prays and thanks the deities. Then the monks and village elders take a bit of everything, including the squashed rice in a palm and put some in each child’s mouth, slightly patting his/her back and asking, ‘What is your wish?’ The child then speaks their wishes. The Squashed Green Rice Festival is intended to bring a happy, prosperous life. Ceremonies performed, sacrificial food is taken down for everybody to enjoy, thus sharing in the blessings of the Moon Goddess.

Besides the ritual, Ok-Om-Bok also has a fun portion, usually conducted at temples, which is joyful and highly communal, with garlands and coloured lanterns, games and songs and dances. Particularly, the ngo boat race attracts Khmer, Viet and Chinese people from Tra Vinh, Soc Trang, Bac Lieu and Hau Giang Provinces to come and take part.

The tales have it that in this region with its criss-crossing rivers and canals, people are kind and love helping each other. Every day, Buddhist mendicants have to go far away from their pagodas, and come back at mid-noon for prayers. On one such day, a big storm burst. There is a Buddhist teaching that anyone who did kind things, especially to the monks, would have good luck later. Fearing that the monks couldn’t get back in time, everybody quickly made rafts and oared vigorously to bring them to their temple. To commemorate the event, people began to organize boat races. Since the boats have a beautiful curving, like a snake. They are called them ngo boats.

But according to ‘The ngo boat origin’ in ‘Soc Trang Folklore’, the ngo boat race custom originated from the fact that Khmer men had to train using boats to defend their settlements.
Today, not only men, but Khmer women also take part in ngo boat races. A ngo boat can carry 40-50 persons and is decorated with beautiful symbols and ornaments. Ngo boat race tradition has spread to all provinces and cities where Khmer people live.

In September, 2014 the Ministry of Culture, Sport and Tourism recognized Ok-Om-Bok Festival as a national intangible cultural heritage.n