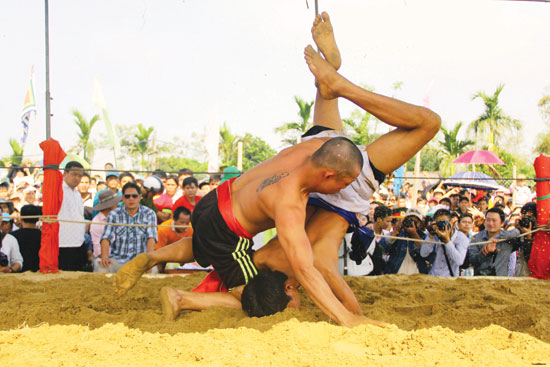 Going to the dirt

Downstream from Hue to Thuan An, Huong (Perfume) River meets Bo River in such a glorious grandeur of water and sky that even the most indifferent ones have to utter ‘so beautiful!’
It was such a strategic point that since 1307, this junction had always been guarded by the most elite troops of the Viet. For centuries, there used to be shipyards and marine training camps here.
To build ships, the locals needed wood. Big logs of wood (about ten metres long) had to be transported from deep forests. It took strong and smart men to do that. It took strong men to control and oar the ships. So they selected strong and smart men for the camps and shipyards. They introduced wrestling, very popular in the North, as a discipline for military purposes.
For seven centuries, around the Thanh Phuoc junction, also popularly known as Sinh, villages were formed with the colour paper and worship painting trades. Again, strong and smart people were needed to get materials to make paper and colours from the forests and the sea. The wrestling training centre was moved from the Thanh Phuoc military zone to Sinh village on the south bank of Perfume River.
Every New Year, Sinh villagers build a stage at the ancestral worship house next to Lai An bazaar. A wrestling competition takes place on the 10th of the first lunar month.
The arena is a square dirt floor about a metre high, four arm spans long on each side, built in front of the ancestral house. Two persons control the fight: a young arbiter standing on the stage and a respected elder of the village in formal traditional dress sitting on the ancestral house veranda to judge the outcomes.
Fighters come unannounced. They fight to represent their localities. Wrestling fans can tell immediately by appearance where the wrestlers come from. Doing both farming and trading, Sinh villagers have well-built bodies. Fair-skinned Hue people look like scholars. Thuan An shore people’s skin is like bronze.
Reality shows that fishers have big arms, small legs, and farmers have small arms and big legs. A good wrestler should be well-proportioned. Strong legs mean strong base; strong arms can take down the opponent. But big is not necessarily strong, and strong does not always win.
On the tournament day, morning is spent for the elimination rounds. Those who have three consecutive wins stay on for the semi-finals in the afternoon, and again those who have three consecutive wins will fight on in the final.
Each wrestler can register only once. When a man’s back touches the dirt, one of his village fellows can retake the fight to save the village’s face.
To be able to step onto the arena, young men have to train hard and nurture their morale. A strong man without a strong spirit won’t be able to hide rude behaviour when his body and honour are touched.
Sinh village is as far south as the art of wrestling spread. Going further southward, one sees only non-wrestling martial arts. Today, Sinh village wrestling traditions are so popular that competitions are organized not only on the 10th of first lunar month in Sinh, but also in other big events of the nation or of Hue.

Sinh, or Lai An village, is located on the southern riverbank of the Huong (Perfume) River in Hue. The village was formed in 16th century following the arrival of Nguyen Lords, whose descendants later formed the Nguyen Dynasty (1802-1945). The village is reachable from Hue City centre on motorbikes or bicycles for 30km downstream. The village has become renown for the craft of votive paper paintings and traditional wresting bout in the 10th day of every lunar new year.