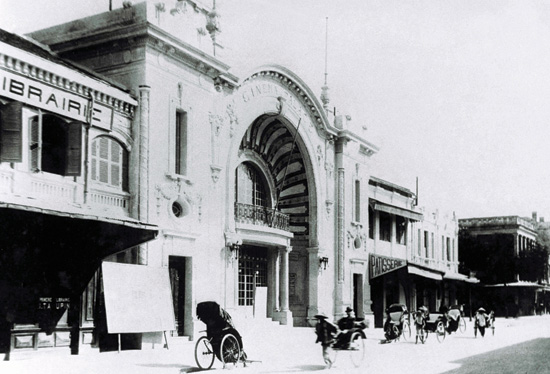 The Palace Cinema in 1932; the photograph, by Dr Hocquard, is from the archive of Mr Manh Thuong

Vietnam Heritage, February 2011 — Before cinemas appeared in Hanoi, the Grand Café, at the Metropole hotel, was used to show movies, in the early 20th century.
According to Trung Bac Tan Van, a newspaper of the day, the first movie was The Tiger God, shown in August 1920. The movies were silent but the entrepreneurs followed what was done in France and invited music bands. The first band was an octet of indigenous players. Programs were advertised in the newspapers and handed out to the audience.
Eventually, a cinema, the Palace, was built in Nguyen Xi Street.
Before this building was demolished, just recently, people were still able to read its name over the wall. Some time between 1947 and 1954, the cinema got the new name Eden and its nice façade, in the form of a shell, was blocked with sheets of plywood and few could remember the original.
The Eden became the Workers’ Cinema, and was then demolished to build a theatre for the Hanoi Play Group. When the plywood sheets were removed the original facade was revealed, but the demolition was finished before public opinion was strong enough to inspire conservation of the facade.
The playhouse, which existed for nearly two decades and was reserved for talking plays, was demolished as Hanoi celebrated its 1,000th anniversary, last year, and a new theatre was built.
It was promised the new building would restore the original beauty in modern architectural language.