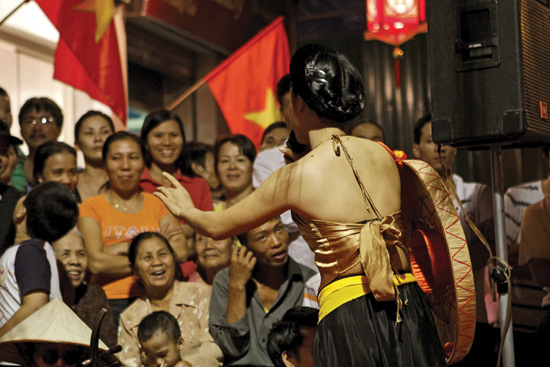 A square of cloth

Vietnam Heritage, February 2011 — The yêm is a square of plain cloth with four strings to tie around the neck and body. Historian Mr Duong Trung Quoc told bee.net.vn ‘Along with the traditional long dress, the áo dài, the yêm was the most popular item of dress for Vietnamese women in the old days.’
­­My mother told me that in the 1950s she had usually seen my grandmother, now 86, wearing a skirt and a yêm, exposing her bare back, while she did housework on hot days.
Women could make their own yêm. Like other women in her rural village in northern Central Vietnam, my grandmother dyed her yêms herself with cu nâu, a tuber from the forest. Poor women dyed their yêms brown and their skirts were dyed black with mud. My mother said richer women would use a silk yêm.
Mrs Vu Thi Oanh, 93, from Hanoi, said the yêm had been very convenient in breastfeeding her ten children.
Hang Dao Street in Hanoi was a popular area for trading silk products, including the yêm. Yêm traders built a temple named Dong Lac Quyen Yêm Thi, which means Temple of the Silk Yêm Market, at 38 Hang Dao Street. It is still there.
My mother told me that in the late 1950s or early 1960s, when my grandmother was in her mid-30s and already had six children, she gave up the yêm, and Vietnamese skirt, and started to wear Western-style trousers and no bra.
In recent years, the yêm has made a comeback, but not gone far beyond fashion shows.

Model Tran Bao Ngoc talks about the yêm :
In 2000, designer Nguyen Tien Loi and I went to Italy on a business trip. For a party we were going to, we decided I needed to wear something traditional, Vietnamese and fashionable.
The material and colour of the yêm are natural, which was trendy at the time. The design also was suitable. The yêm is a very sexy top that covers only the front.
The precarious strings used to tie the yêm around the neck and body make it even sexier.
I finally decided to wear a taffeta yêm with a Vietnamese traditional skirt – váy ?up.
My dress was eye-catching and in harmony with the party. I felt very confident and comfortable.
I think the yêm is not popular these days because it is too sexy to wear. And it could be worn more if there were more variations.