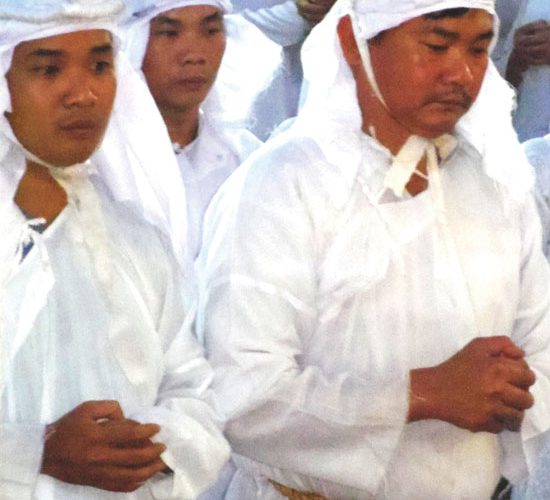 Honour thy father and mother

Tay Ninh City is the centre of the Cao Dai religion, a syncretistic faith that originated in Vietnam during the turmoil of the 1920s and 1930s, when resistance to the French colonialists was gaining strength throughout the land. People were seeking a new way, a spiritual path that would lead not only to freedom, but to inner peace.
I attended a memorial service for a friend’s father at the family home in Tay Ninh. The front of the house had been opened and had become a chapel with an altar piled high with offerings around a large photo of the father. It was the second anniversary of his death and his family had gathered to honour his memory and to offer prayers. Four men dressed in blue áo dài and old-fashioned mandarin-style headdresses escorted a young man into the empty square before the house.

The chanting began as the young man, the oldest son, knelt on the ground and prostrated himself toward the altar. The men in blue stood around him, forming the four points of a perfect square. As the chanting continued, the square turned ninety degrees from time to time. The men never missed a step in the intricate choreography and the human square retained its perfect shape. The man in the centre prostrated himself again and again. The photo on the altar was of his beloved father. The second son knelt before an altar in the rear, awaiting his turn.
As the oldest son stepped out of the square, the second son took his place. The ceremony was repeated. The third son knelt before the back altar; his turn would come next. When he was escorted to the centre, he knelt and prostrated himself as his brothers had done. His face was solemn and dignified. He seemed to be overcome with the strong feeling of the moment.
Then there was a pause in the ceremony as the family slowly gathered. The older women of the family entertained me with cookies and cool drinks during the traditional music, songs and chants before the main ceremony began. Then, one of them took my hand and led me around to the back of the house. She motioned for me to enter the main room through a back door to take photos. I am shy and did not want to be seen or to interrupt, but I was curious as to what would come next.

Until this moment, the sons had been at the centre. Then, the matriarch of the family, a woman seventy years old, stepped quietly to the centre in front of the steps. This was my friend’s mother, who had so graciously welcomed me earlier and whose words of explanation in Vietnamese I strained to understand. She stood tall and dignified as her three sons, five daughters and daughter-in-law gathered directly behind her. Following them were the grandchildren and other members of the family. All were dressed in white.
As the mother stepped forward, bowed and knelt on the top step, the family members behind her knelt on the ground. They followed her lead and prostrated themselves many times. I took a few photos and slipped quietly out the back door. I was content to watch from the side and felt honoured to be there. The ceremony continued a good while and every moment was beautiful. The chanting was unusual and my musician’s heart yearned to learn the traditional modes and scales.
From the back of the house came the wonderful smells of traditional Vietnamese dishes. After the ceremony, it was time to share a meal. My friend introduced me to some of his cousins, and after the meal his older brother took me from table to table and introduced me to more family members. My brain was filled with kinship terms like anh, ch?, em, cháu, bác. My Vietnamese teacher will have to help me sort them out when I return to Ho Chi Minh City.
Cao Dai means ‘The High Tower.’ It is a Taoist term for the Most High God, the Divine Creator and Lord of all life, who is invisible but whose symbol is an all-seeing eye. Many tourists visit the Cao Dai cathedral and compound in Tay Ninh. Prayer services are scheduled four times every day and are open to the public. For those who are bewildered by the statues and paintings of gods and saints from various traditions, Cao Dai seeks to bring together the best of all religions, the values that are common to them all.
Many Cao Dai beliefs and practices come from the teachings of the Buddha and from Taoism; its conduct and moral code from the teachings of Confucius. This is similar to most Vietnamese culture, as is the focus on strong family ties. The different-coloured robes of the Cao Dai clergy represent the three strands: yellow for Buddhism, blue for Taoism and red for Confucianism. Cao Dai, however, also recognizes Jesus as an important figure both for His teachings and for His perfect life, as well as figures from other religions and traditions.
Although Cao Dai does not actively proselytize, Cao Dai now numbers millions of adherents worldwide.n