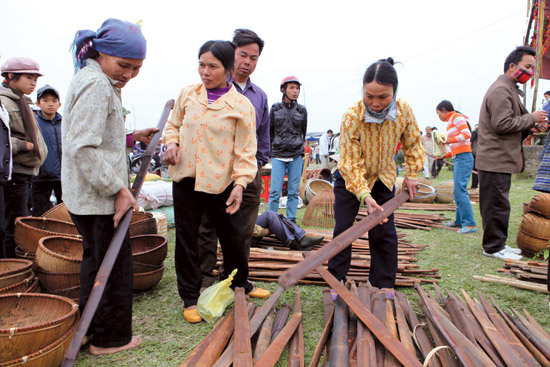 In many places in Vietnam, there has been a T?t commerce in which the goods and prices are not the point and good luck is, according to Discovering the Vietnamese Culture by Tran Ngoc Them. It is believed that if transactions are carried out smoothly and in good spirit they bring in good luck in the new year.
Vieng Market is held only once a year, on the 8th of the first month in the lunar calendar, in Trung Thanh Hamlet, Kim Thai Commune, Vu Ban District, Nam Dinh Province. Goods for sale include plants, agricultural tools, meat and antiques, but the goods are not really the point. A transaction at Vieng Market is reputed to confer luck for both sides for the entire new year. According to market tradition, sellers don’t ask exorbitant prices and buyers don’t bargain. There used to be versions of Vieng market in other places in Nam Dinh.
According to Discovering the Vietnamese Culture, in the old days in Ha Tien Commune, Ha Trung District, Thanh Hoa Province, on the first morning of the year, people went to market with cookies, candies, cigarettes or the fruit they picked from their own garden. The sellers would ask exorbitant prices and the buyers would beat them down by as much as a hundred times. Both sides believed this would bring them luck in transactions for the rest of the year.
Also, according to the book, in Central Vietnam, in the provinces from Nghe An and Ha Tinh all the way to Thua Thien-Hue, people used to take such goods as rice, cookies, candies and toys to T?t markets to sell. They cried, ‘Anyone want to buy foolishness?’ ‘Foolishness’ was shorthand for things that had gone wrong during the past year. And people were happy to buy the goods on offer, because buying at T?t, and for T?t, augured well for the year to come.n

Bamboo poles for carrying baskets, and the baskets, for sale at Cho Vieng Market an annual luck market on the 8th of T?t in Nam Dinh Province Northern Vietnam.
Photo: Viet Tuan

In the days leading up to T?t, debt-collection is a big thing. 29-year-old Vo Huong Lan, from Hue recounted in a blog early 2009 the days when she was a child and went around collecting debts for her shopkeeper mother pre-T?t. Among the things she wrote were:
In the early 1990s, my mother ran a little grocery shop [in Hue]. I, the only other member of the family, helped. In those old days, when I was in primary school, I dreaded debt-collecting. The debts made a big total as the year drew to a close.
About a week before T?t, lunar New Year, my mother started to send massages to her debtors. Some came and paid immediately, but my mom listed the names of those who did not on a piece of paper torn out of a cigarette pack.
Living standards have improved. Now recalling those old seemingly ever-lasting hard days I feel sorry for my mum and myself. People say let bygones be bygones. Once they have become the past, pain and hardships are only the spices to life, for me to appreciate it and for me to love those needy people even more.n