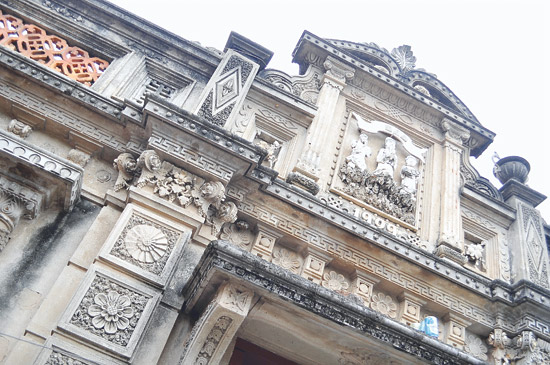 Blessings above the gates

Forty kilometres downstream from Hanoi, one comes to Cuu Village in Van Tu Hamlet in Phu Xuyen District. Many people call Cuu Village â€˜Western Village,â€™ because they regard the villageâ€™s architecture as perhaps too peculiar and outstandingly beautiful in comparison with the familiar manner of ancient villages in the early summer-harvest lowlands of the North.
However, to be specific, Cuu Village is actually an Asian village with subtle decorative features that are at once rudimentary as well as open and lofty. The village borrows a touch of Western style, so as to elevate the beauty of an architecture that is infused with Vietnamese characteristics. The interesting thing is that this impeccable fusion has, for almost a century, retained its original beauty.
The wealth and prosperity of Cuu Village, it is told, began during the French occupation. The people of Cuu Village were renowned for the Western sartorial trade throughout North Vietnam. Owing to this, the village grew quickly and the villageâ€™s prosperity manifested in the unique ornamental house designs, which started in the 1920s and continued through to the 50â€™s. Returning to the Cuu Village of today, the village gate is stately and is the tallest ancient architectural structure in Cuu Village. The gateway appears like a giant book that opens up to greet guests. The village gateâ€™s watchtower, along with its roof tiles, high curved fringes and embossed mythical lion statues, despite having chipped away with time, still retains its original ancient beauty.

Continuing along the villageâ€™s winding road, the spacious houses and moss-covered brick alleys gradually reveal a different storyâ€”a story about the decorative symbols and lines in the architectureâ€”a story whereby people can fathom the intents of the owners, who wanted to send messages along with word of their dreams, prayers for auspicious signs, lucky omens and affluence. On the gate into a house in Cuu Village is an image of a bat, a symbol that is supposed to bring blessings that include riches, longevity, health, virtue, and the full enjoyment of oneâ€™s years. On this gate, the bat bears in its mouth the character for â€˜Longevity,â€™ which is stylized to look round just like a tortoise shell (the tortoise is a symbol of longevity).
The people of Cuu Village built high, stately houses with wide doors, but worked afar and settled in the major provinces and cities. Thus, the magnificent architectural structures of the period are now almost entirely devoid of their owners. However, the enlarged character plaques on the arched gates accentuate Cuu Villageâ€™s exceedingly unique architecture. Each family in ancient times had their own distinct way of exhibiting lines of characters, parallel couplets, and architecture. There are plaques of enlarged Chinese characters that read anything from, â€˜The sun blankets the trees below; a wellspring of profit arrives from afar. Building this home, may fortune abide thereinâ€™, to those that suggest a noble air: â€˜Chivalrous and elegant, diminish arrogance and haughtinessâ€™â€”such are words that remind the master of the household to exhibit humility among people.

One of Cuu Villageâ€™s most beautiful structures today is the home of the elder Phu Du, in which the family of Mr. Bui Van Khanh now dwells. The house was built in 1929 and is one of the oldest houses in Cuu Village. On the entrance gateway is a finely-sculpted image of a prawn with robust pincers that appear to cradle the four enlarged characters for: â€˜Enter with filial piety; leave with fraternal deferenceâ€™. Just past the gate, the homeâ€™s inner space consists of a mix of Asian and Western architecture. The jalousies, pillars and gables are all sculpted in relief with subject matters like flowers and leaves and prunings that are very much Western characteristics, but on the rooftop is an embossment of the familiar characters, â€˜Fortune, Wealth, Longevityâ€™ (PhÆ°á»›c, Lá»™c, Thá»), which are often seen in the cultures of Vietnam and China, along with a line of Chinese characters: â€˜Three stars shine.â€™ This Western-Vietnamese mix is never confused, but on the contrary, appears harmonious, luxurious, stately, and to some degree manifests the noble status of the head of the household in the Cuu Village at that time.
Walking through Cuu Village is like losing oneself in a storehouse of ancient literature through the decorative features of parallel couplets that further enhance the significance and beauty of each structure in the village. Right from the village gate, a parallel couplet evinces the open-mindedness, broadness, and free-spiritedness of the people of Cuu Village: â€˜Outside, peace is not closed to the rivers and mountains that remain just as in yesterdays/In days to come, prosperity shall abide supremely dignified as horse-drawn carriages come and go .â€™ Passing through the village gate, inside is the parallel couplet, â€˜Left and right, the path to the clouds is recast broadly/North and south, converging to the great level road.â€™
Indeed, going through Cuu Village, strangers always get a sense of the villageâ€™s intimacy and congeniality, as if the stranger and the village had already met a long time ago. Everyone is willing to invite visitors to come into the house, drink a cup of tea, and receive a few stories about Cuu Villageâ€™s time of prosperity in days of old. On the villageâ€™s main road is the building of the Duc Loi garment brand, a tailor shop that is famous throughout Hanoi. It has a parallel couplet in Chinese characters that reads, â€˜Prosperity and fortune come to the door, everything fine and fragrant/Flourishing, the roads are clear for ten-thousands of miles afar.â€™
Next to the ancestor worship hall, the house of the head of the household has an enlarged character plaque for â€˜Chivalry and Eleganceâ€™ and a parallel couplet right at the entrance gateway that says, â€˜On the road home is sunlight upon the mandarin in service/In the clear wind, the stars lead an old friend to arrive.â€™
Thatâ€™s how it is; every time one passes by each house on the Cuu Village road, regardless of whether people still live there or the doors are shut silent and abandoned, there is a feeling of going back through time in the realm of memory. However, above all, from the lines of characters of every home at its entrance gateway, a purely East Asian character and the particular personality of the household head are conveyed so that the people of later generations may, to their heartâ€™s content, come to understand, appreciate, and explore.