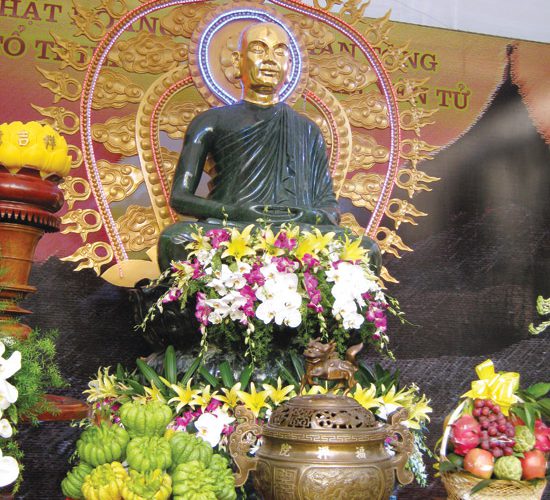 Wise king gets ‘jaded’
By Chu Khoi
In November 2012, following 100 days of construction, artisans successfully sculpted a statue of Buddha King Tran Nhan Tong from a jade gemstone block weighing more than 4.5 tonnes. Tran Nhan Tong was the third king of the Tran dynasty, and sat for 15 years on the throne. He also founded the Truc Lam Yen Tu Zen School. He has been praised by historians as one of the wisest kings in Vietnamese history. The statue followed the prototype of the king’s statue on Yen Tu Mountain, Quang Ninh Province. Van Phu An Company, who bought the jade block to carve the statue of Tran Nhan Tong, said that the Nephrite jade block originated from Canada. This type of stone is blue, clear and shiny.
The gemstone was blessed with prayers and mantras chanted by the Vietnamese Buddhist Sangha and Tibetan Lamas before being sculpted.
The final step in completing the work was the inlay of gold on the figure’s face. The statue of Buddha King Tran Nhan Tong is known to be one of the largest jade statues in Vietnam, with the overall height of 3.25 metres. Its body is 1.6 metres high and weighs 2.5 tonnes.
The statue has been displayed at different places throughout the country.

Population bomb
vietnamnews.vn, 2 November
Vietnam’s population has reached 90 million, making it the14th most populated country in the world, 8th in Asia and 3rd in Southeast Asia, according to Dr Duong Quoc Trong, director of the General Office for Population and Family Planning.

Going to the dogs
english.vietnamnet.vn
In early September, people in Danh Thang Commune, Hiep Hoa District, Bac Giang Province, detected two dog thieves. They chased the thieves and beat them to death. Before being killed, the two thieves defended themselves with electric prods, knives and clubs.
When the police arrived, they conducted an investigation, and called a few people to interview, holding them in custody.
800 households in two villages in Danh Thang Commune signed a document to confess beating the two dog thieves to death. According to them, every single person in the two villages beat the dog thieves, not only those who were detained.
In recent years, dog theft has become a big issue. In most cases, when the dog thieves are caught by local people, they are beaten, and some die.

Vietnamese have the stomach for idioms
It seems that Vietnamese are very interested in their stomachs and bellies.
Instead of saying a kind-hearted person, they say ng??i t?t b?ng, or a person with good stomach (belly).
The idiom ‘laugh one’s head off’ can be translated as c??i v? b?ng or laugh so much that one’s belly might break.
An ‘ABC lesson’ could be translated as bài h?c v? lòng (stomach-breaking lesson).
To indicate abdomen, belly, stomach and intestine, Vietnamese use b?ng, lòng, d?, ru?t.
To think to oneself can be translated as ngh? b?ng or to think in one’s abdomen. To measure another’s foot by one’s own can be translated as suy b?ng ta ra b?ng ng??i or to infer another’s stomach based on one’s own stomach.
B?ng làm d? ch?u or ‘the stomach does, the stomach suffers’ can be translated as ‘as you make your bed you must lie on it’.
To fall in love might be ph?i lòng while ?au (pain) lòng can be translated as to feel deep grief.
Tan nát cõi lòng (stomach broken) could be used for heart-broken.
To engrave on one’s heart could be translated as ghi lòng t?c d? (to write in, to engrave on one’s stomach). To learn by heart is h?c thu?c lòng while ?? b?ng (to put in one stomach) is used when one is not pleased with a certain action or behavior, treatment of others but does not speak up.
L?y lòng (to get stomach) means to win one’s heart. From the bottom of my heart means t? t?n ?áy lòng or from the bottom of my stomach.
‘I don’t have the heart to refuse’ translates as tôi không n? lòng nào t? ch?i (I don’t have the stomach to refuse). To open one’s heart and mind to somebody is c?i lòng (open one’s belly).

Street beats
www.thanhniennews.com, 18 October
Vietnam’s young people are transforming their country’s ballad-based music with the rebellious sounds of hip-hop.
The young performers call themselves underground music artists, but critics prefer to describe them as rebels without causes who are too popular on the Internet to be described as ‘underground’.
Their original sound enjoys a cult following and a unique position on the local arts scene similar to that of underground artists in other countries. Existing on the fringes gives them credibility among a young and hip audience.

Now and ‘then’
vietnamnews.vn, 22 September
A high school in Thai Nguyen Province has been teaching its young pupils the art of traditional then singing in a bid to preserve the genre. Then is the folk singing of the Tay, Nung and Thai ethnic groups in northern mountainous provinces such as Bac Kan, Lang Son and Ha Giang.