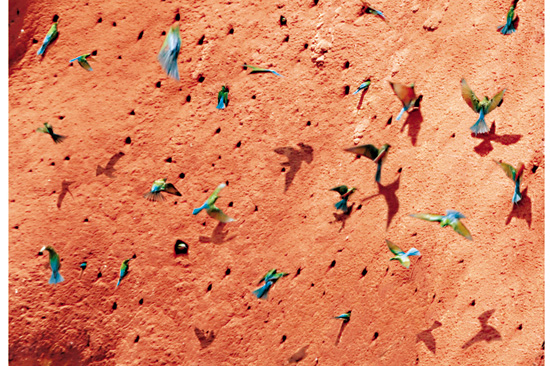 Humans prey on the bee-eaters of Binh Thuan

Bee-eaters make their nests in an earth cliff.

Vietnam Heritage, June-July 2011 — More than ten years ago, in Binh Thuan Province [on the southern Central Coast], I used to get a ride on a fishing boat out to sea to take photographs. On returning, one day, I noticed a peculiar, red stretch of coast in Tien Thanh Commune, about three kilometres from the city of Phan Thiet. It is a desolate place with dozens of vast holes in a row, some more than 100 metres deep and a few dozen hectares in area, beautiful but treacherous. I discovered that bee-eaters, insect-eating birds, come to this place to build their nests and lay eggs every year.
There are 26 species of bee-eaters worldwide, with three species nesting in Binh Thuan Province: Green bee-eaters (Merops orientalis), Blue-throated bee-eaters (M. viridis) and chestnut-headed bee-eaters (M. leschenaulti).

Bee-eaters in Vietnam favour open country, bush and forest edges. However, they need sandy cliffs to build their nest tunnels; with all the construction in Vietnam, and subsequent digging for sand, many of the nesting sites are under threat. On top of this, local people dig out the nests to get to the eggs and nestlings.
The birds use their beaks to dig holes penetrating one to one-and-a-half metres in which to build their nests. Each female lays four or five eggs.
In about June, the head bird of a group and the parents take their young into the brush, and soon disperse.
It is noisy and exciting when the bee-eaters come to nest and it becomes quiet when they leave. I have been greeting and saying goodbye to them for years. The numbers of nesting have been decreasing year by year, due to hunting, which saddens me.