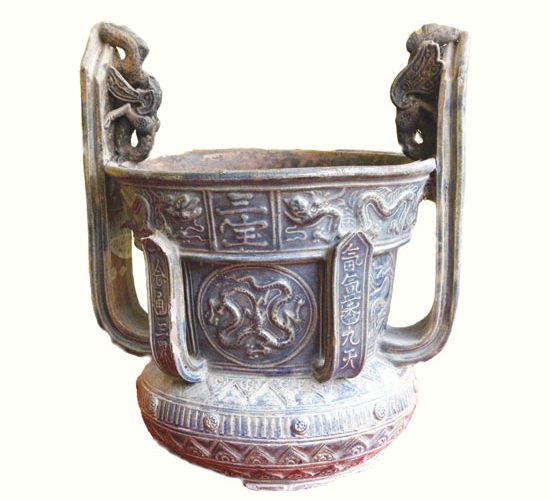 All about the vases

Vietnam Heritage has been publishing a series based on 2,000 Years of Vietnamese Ceramics by Nguyen Dinh Chien and Pham Quoc Quan, published by Vietnam National Museum of History, Hanoi, 2005.

This month the topic is monochrome gray-blue ceramics.

In China, gray-blue ceramics appeared from the Yuan dynasty (1260-1368). However, in Vietnam, they were not produced until the later Le dynasty; mainly vases with bulbous bodies and large bases, and a lamp stand in two parts. Their gray-blue glaze is a rather thick covering on a porous body. A typical example is a vase from a Cu Lao Cham shipwreck with under-glazed flower sprays on the body and lotus-petal collar on the shoulder and base. The lotus petals have squared tips and spirals inside, which are painted in a rather standard style and arrangement. The centre band has floral sprays; more realistic than those from later periods. Meanwhile, Le lamp stands are not inscribed like most of later Le-Mac lamp stands, but often have various dragon motifs somewhat similar to the Tran dragon.

During Le-Mac period (1527-1599), gray-blue glaze was still preferred for lamp stands and incense burners decorated with dragons and clouds. Many lamp stands are inscribed with the maker’s name, Dang Huyen Thong, and the production place, Chu Dau kiln (Hai Duong). At that time, gray-blue glaze tended to be thinner and lighter. Moreover, pieces made at different times often have different glaze tones and decorative patterns.

The last phase of Vietnamese gray-blue ceramics occurred in the seventeenth century. Typical examples are the covered ewers with a lion-dog on a globular body, high spout and a flat base.n

Closed every first Monday of months