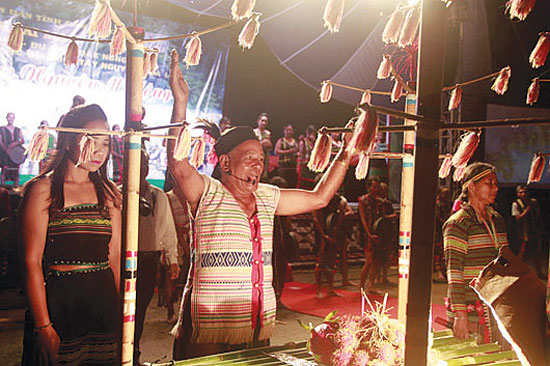 The rules of the forest

Ma is an ancient tribe that populated Tay Nguyen and the East of Southern Vietnam. Today, there are 41,405 Ma people distributed in Lam Dong, Dak Nong and Dong Nai Provinces. Ma live in the forests and mountains. Forests give them paddies and food and protect their villages. Ma people have forest classifications: Yang forests, Krong forests, Glong forests, ghost forests (burial areas), Rlau Goe forests and Sar forests. They also have rules to treat each forest accordingly.
The Ma often sing together: ‘This is Yaang forest, oh children, mind your sins. This is Krong forest, oh children, mind your sins.’ It is to remind the community members not to violate the rules that help preserve the living environment of the tribe.

Treating Yang forest
(where deities reign)
Yang/Yaang in the Ma language means ‘deity’. Yang forests are sacred; they are where deities live and reign. In Ma territories, there are many mountain tops covered by forests, but only some are chosen to be the living place for their deities. Each village has its own Yang forests. These are usually located on high mountain tops, with big, tall trees and fertile soil, where a river or a creek brings water down to the valleys. They are carefully selected by village elders and family representatives, taking opinions from the whole community. The elder then informs other villages to avoid choosing the same forest. A date is set for a sacrificial ritual and passed down through generations to protect and preserve.
Ma villagers have these sacrificial rituals irregularly. The time periods between rituals are usually over 5 years, sometimes as long as 20 years. It’s up to the village. The forest deities are received in a procession. The sacrifice is a buffalo, a valuable Ma possession. The animal’s blood would be smeared on tools, utensils and the ritual pole. Taboos are imposed on the villagers in relation to the Yang forest: logging, hunting and gathering are prohibited. There are many tales about those who violate these rules and then suffer illnesses and painful death, which make people fear and respect the taboos. Violators, if known, would be fined heftily and the fine is sacrificed to seek forgiveness from the deities.

Violations are judged as big and small. Cutting a big tree and hunting are big crimes. Cutting a small tree, gathering veggies and littering are small crimes. The judgment is communicated by an elder to everybody. The violator has to prepare the sacrifice, and villagers choose a date for the ritual. The big fine is a buffalo (accompanied by goats, pigs, poultry and wine.) If the sinner has no buffalo, he can sacrifice a bull. The small fine is a pig (accompanied by goats, poultry and wine.) The ritual has two parts. One takes place at the common house, the other at the place of violation in Yang forest. The sinner has to be
present during the whole
ceremony, hosted by an elder, who would say prayers to beg for forgiveness.
In 2011, at Village 2, Loc Bao Commune had a sacrificial ritual at a Yang forest. A forestry company’s bulldozer had trespassed on Yang forest territory. Elder K’Lo gathered the villagers and fined the company. It was a big crime, so the fine was a buffalo. A company’s representative was present during the whole ceremony.
Treating Krong forest
(residence of the god of
the homeland)
Krong forest is an old forest, not as big as Yang forests, but related to a specific deity, the god of the homeland. The mountains in this forest must have specific features. The Ma of B’Dung village (Loc Bac Commune, Bao Lam District, Lam Dong Province), conduct their ceremonies on Nao Ut, Luc Mo, and Lah Nhal mountains. They used to have this ritual every year. Village elders let the villagers know the time, so they all can participate. An elder would host such a ceremony. The village’s sacrifice is normally a chicken and a jar of wine. On the mountain, the elder conducts the rituals and reads prayers. Then he kills the chicken and pours the wine on the ritual ground. The sacrifice items of the village members are taken back to the common long house and enjoyed by everybody.n