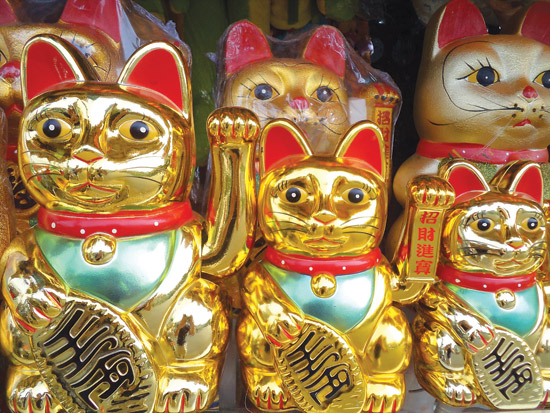 Petting a duck in ‘Chinatown’

Though Saigon is firmly planted on the tourist trail, its neighbourhood wards connected to the road less travelled capture my imagination with uniqueness mercifully undisturbed by holidaymakers. With the cover story in the June 17, 2012, edition of the Viet Nam News boldly proclaiming, â€˜Chinatown has for years faced a lack of space for pedestrians, green areas and parking lots and had poor services, all of which does not attract tourists,â€™ I sensed an opportunity. My translation of this less than glowing endorsement is a city quarter awaiting discovery and most likely exuding raw grit best savoured now before progress sweeps away the last vestiges of authenticity.
Chinatown. The very name evokes images of dragon-adorned, red-and-gold friendship gates serving as the stereotypical portals to dim sum parlours, souvenir shops and wet markets packed with exotic smells and sounds. These clichÃ©s danced around my head as my taxi recklessly careened its way towards Saigonâ€™s Chá»£ Lá»›n (â€˜Big Marketâ€™) neighbourhood. This old quarter, in District 5 and adjoining areas of District 6, sprawls along a waterway, the Kinh Tau Hu, that leads east to a canal that meets the Saigon River.

Though firecrackers and beating drums behind any such gate would not meet my arrival, I did seem to cross an invisible frontier where Nguyá»…n TrÃ£i Street begins its multilane promenade into Chá»£ Lá»›n. Chinese symbols now identifying shops alongside their Vietnamese translations change the very fabric of the city from the bold, colourful, and bright showplace rising skyward in District 1 to that of a more working-class, subdued aura. Chinatownâ€™s mid-rise buildings lining a patchwork of narrow streets and cramped alleyways stand seemingly oblivious to, yet highly weathered by, timeâ€™s forward march.

The taxi deposited me at the centre of this neighbourhoodâ€™s universe, BÃ¬nh TÃ¢y Market. As I surveyed its jam-packed and malodorous contents sizzling and baking in the steamy, late morning air, a jaded sense of been there, done that sent me on a path of quiet defeat. Indeed, the same cast of characters and backdrops plays out similar narratives from one end of Vietnam to the other, and I was soon wondering if this trip into Chinatown would prove a non-starter right out of the gate.
I quickly exited the market and confronted the chaotic streets fencing me in with an almost impenetrable stream of motorbike traffic buzzing through what I at the time deemed to be a most non-Chinese of Chinatowns. I would later learn a Chinese minority had indeed settled in the area during the late 1700s, but the subsequent centuries would usurp any superficial and easily noticeable vestiges of the original culture and language.
As several â€˜What if?sâ€™ clouded my view, I began losing sight of the forest for the trees as I fomented a wish list for the area in my mind. What if that fetid miasma choking Hang Bang Canal and its trash-strewn banks were sanitised and landscaped into a pedestrian-friendly promenade? What if the dilapidated apartment houses were torn down and replaced with sleek historical architecture? What if bright-red lanterns were strung across the streets as in proper Chinatowns across the globe?

North of the market at the corner of Háº£i ThÆ°á»£ng LÃ£n Ã”ng and PhÃ¹ng HÆ°ng Streets, an elderly woman sporting a most pronounced hunched back and pushing a squeaky cart overloaded with feather dusters, rain ponchos and other random odds and ends snapped me back to reality. A man selling bÃ¡nh mÃ¬ bÃ² lÃ¡ lá»‘t, or baguettes with beef-stuffed betel leaves, from his bicycle-mounted grill then stopped me dead in my tracks. The charred meatâ€™s sweet aroma pulled me into the present tense right as this wizened woman inquired into my potential need for a green plastic fly-swatter firmly gripped by her knobby fingers.
I realised then and there I needed to cease this wishing of Chá»£ Lá»›n into what it could be and dive into what it already was. A guidebook destination packed with a full dayâ€™s itinerary of must-see monuments Chinatown it is not, but rather an outdoor museum of everyday life randomly unfolding at its natural, unscripted pace. The art of travel opens our eyes to keenly observing the very people whom we largely ignore back home. Indeed, merchants adding their colourful brushstrokes of commerce to this chaotic canvas called Vietnam never cease to excite me, and I vowed then and there to become an active participant in Chá»£ Lá»›n rather than a detached observer.

Walking around the area in isolated anonymity was providing only a one-dimensional toe-dip into these murky waters. I still had yet to develop any solid connection or clarity as to what Chá»£ Lá»›n was. By joining the growing queue at that banh mi stand to sample a neighbourhood specialty, I waded in earnest into the shallow end of this teeming pool. Unfortunately, the sandwichâ€™s licorice-like betel leaf and anchovy-tasting fish mint herb washed over my tongue like a bitter tidal wave. Even the oddly textured, squishy meat left me wondering if I could ever develop a liking for this particular sandwich. Chá»£ Lá»›n so far remained much the same, as nothing special had yet emerged from its rough-around-the-edge depths.

No matter how this neighbourhood evolves, I will forever cherish the mental snapshots of this incredible day. Now, instead of dreaming about possibilities, I find myself
hoping Chá»£ Lá»›n can indeed retain its current identity while potentially charting a brave new course. Perhaps I shall soon return to Minh Huong Temple to light another red incense coil to summon the ghosts of Chá»£ Lá»›nâ€™s past. I will ask them to carefully usher this district into the future in a manner where the next generation remains closely connected to yesteryear.