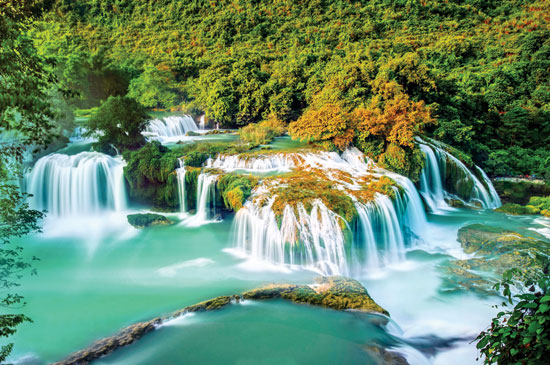 Itâ€™s one of the best expressions of the gentle power of Mother Nature. Itâ€™s where oneâ€™s visions and dreams can be born. According to some, itâ€™s the most beautiful waterfall in Vietnam and one of the top falls of the world. A tour to Ban Gioc Falls could certainly fulfill oneâ€™s desire for a fresh and energetic notion of paradise.
Ban Gioc, or Duc Thien â€“ Ban Uoc Double Falls, as the Chinese call it, is a cascading fall on Quay Son River on the border between Vietnam and China. It is significant, not only as a symbol of national sovereignty, but also as an important destination for Vietnam tourism.

Like a stylish lady, who is beautiful in any of her dresses, Ban Gioc is attractive in different ways according to the seasons. During the dry season from October to May, Ban Gioc is elegantly shy, like a goddess whoâ€™s just descended to earth and is still abashed at worldly scenery. The clear blue water in summer urges one to take a dip to be one with the sounds and flow.

In rainy season from June to September, however, Ban Gioc is abundant and formidable. It rumbles and throws up myriads of water particles that form a misty cloud around it. Seasonal rains may make your way less comfortable, but having arrived, you will find what you see is worth your while all the same.
From Hanoi to Ban Gioc, a 370 km distance, you can take a motorbike, a bus or a car. Each choice has its own advantages. A bike would give you more flexibility in terms of itinerary. You can stop anywhere you feel like, and along the way there are so many sights you will want to contemplate and engrave in your memory. You can also take a bus. The bus fare from My Dinh, Luong Yen bus terminal to Ban Gioc is between 190 and 210k.
There are hotels and low-budget inns at Trung Khanh Township and Cao Bang City, both of which are near to Ban Gioc. The room rate at an inn can range between 150k and 300k depending on the quality.
A trip to Ban Gioc offers you the choice to visit some other famous destinations such as Nguom Ngao cave, Pac Bo cave â€“ Lenin creek, Thang Hem Lake, etc.
Pac Bo is a cave in a big lime stone mountain, with a small creek, named Lenin by Uncle Ho as he was passing near its entrance on a rugged slope. In the dim light inside the cave, one can see-though not clearly-a line written on the stone wall, â€˜February the 8th, 1941.â€™ That was the day Ho moved into this dampened little cave, deep in a gorge and forgotten by God and people. Lenin is a crystal clear creek, reflecting the blue of the skies and the lush meditative green of the surrounding forests.
Nguom Ngao Cave is about 3 km from Ban Gioc, the gut of a mountain in Trung Khanh District of Cao Bang. Its total length is 2144m, with 3 main entrances, Nguom Ngao, Nguom Lom and Ban Thuon. Deep inside, it has stalactites and stalagmites of all shapes and sizes that can ignite even the weakest imagination, and a gurgling creek that makes it surreal and one of a kind.
Lake Thang Hen is a fresh water lake in Quoc Toan Commune, Tra Linh District, Cao Bang Province. In Tay language the name means â€˜bee bellyâ€™, because seen from above, it has the shape of a beeâ€™s belly. The lake and the scenery around it have inspired a legend that is told to those who visit it.

The scenic lake Thang Hen
Cao Bang also has many historical sites that you can visit. They tell the contributions of the land and the people of Cao Bang to the cause of the nation, contributions that resonate in the visitorsâ€™ heart.
Cao Bang is a frontier of our country. So to avoid possible problems one should bring all the necessary personal papers. A first aid kit would help in case you get scratched while hiking the mountains and forests. A light jacket can shield you from the heat of mid-day son and the chill of the evenings.
Come to Cao Bang and Ban Gioc falls where you will feel as though you are seeing paradise right in front of you. You will see that it is irresistible, even to the most hardened hearts. Hit the road now!