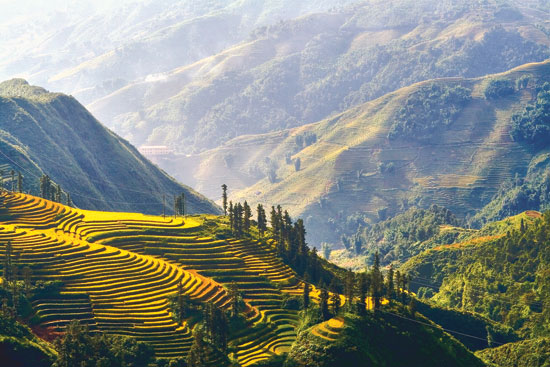 The tour guide and her newborn. Photo: Loes Heerink

We booked ourselves a train to Lao Cai Province. We were picked up by a little van. The driver drove the wet, curvy roads like he was being chased by the police. It was nerve-racking, to say the least.
After arriving at our little hotel and taking a shower, we went for breakfast. I assumed it wasnâ€™t going to be anything special, judging by the rooms and the shower. But I was wrong. We walked up to the top floor, where there was a balcony looking out over the valley; seeing those mountains covered in rice fields was amazing.
We booked a private tour with the Sapa Sisters, a group of local woman who give personal tours. While arranging this, we were asked what we were looking for in a tour. And I asked for the â€œleast touristic routeâ€ we could get.
A small woman, Tam, dressed in traditional clothing and plastic sandals, picked us up after breakfast. She was a big contrast to me and my cousin with our comfortable trousers and hiking shoes. We took a small backpack and left the rest of our belongings at the little hotel. To my surprise, our guide was carrying a five-month old boy on her back. He goes with her to work every day.
We walked along the highway through the little village until we were close enough to the rice fields. Now, most tourists keep walking along the highway, but not us. We took a left turn and landed immediately between those fields.
Due to the drizzle, the paths between the fields were muddy and slippery. This caused us to struggle to stay on the path without falling. The rice fields are levelled differently, so we had to climb up and down the fields, jumping up and down the path every now and then, holding on to whatever we could, while jumping from one path to the other. Pretty soon, Tam found two bamboo sticks and cut them into walking sticks for us, to help us keep balance. The difference between and her and us became painfully clear after that; she, with her baby boy and sandals, was not having any difficulties. We in our good hiking gear and walking sticks were trying not to slip and fall into a rice field.
At some crossings, Tam asked us if we wanted to take the less difficult or more difficult route. And of course, we kept on choosing the difficult one. We hiked through more and more remote areas. Up and down more mountains. And there were more and more slippery slopes. In the beginning we were just struggling not to fall. But after a while, the struggle became more of competition between me and my cousin. We both knew our guide wasnâ€™t going to slip off the path and slide down the mountain or fall into a rice field.
We were literally walking through the rice fields, down those little dirt roads in between the fields and crossing little streams and bamboo forests as we went up and down the mountain. We all know what happens to dirt roads when itâ€™s drizzling. Luckily, nobody got hurt and eventually we didnâ€™t even fall. We did have a ton of laughs about the possibility of one of us ending up sliding off the mountain a couple of metres or ending up face down in a rice field. Oh, the joy I had exploring beautiful Sapa. I didnâ€™t only get to see those rice field covered mountains everybody is talking about. I got to experience them.

During breaks, we enjoyed the view. Our guide gave us loads of information about the area-that it was quite normal for cousins to get married, for instance.
I took this tour a while ago. And the one thing I remember most is how much fun we had walking those slippery slopes. Yes, Sapa is gorgeous and breathtakingly beautiful. But for me, that will always be the second thing coming to mind when thinking of Sapa.