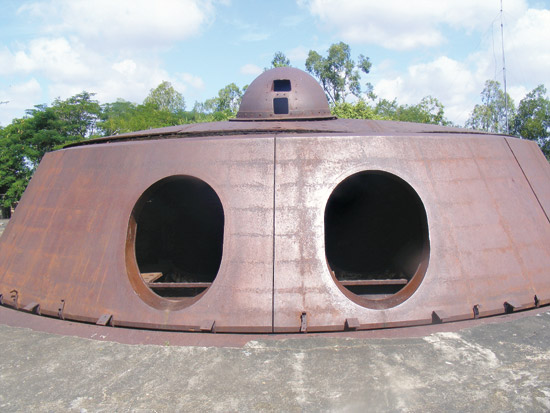 Within the desolate mangrove swamps, against the sea in Can Duoc District, Long An Province in the Mekong Delta, one of Indochina’s largest artillery battle stations has survived for over a hundred years.
In the middle of August 2012, I accompanied a group of musicians from the Ho Chi Minh Music Society to Long An for an actual production. The first site we came to was Rach Cat Fortress in Long Ninh Hamlet, Long Huu Dong Commune, Can Duoc District. The group was led by Le Thi Hong Hanh, the Deputy Director, and Mr Nguyen Cong Toai, the Chief of the Secretariat of the Long An Department of Culture, Sports and Tourism, so we were warmly welcomed and free to look around, despite its being the station of a military unit. I was quite surprised when Lieutenant Nguyen Huu Nam, the station chief, invited the group to the top of the building. But it was only after coming up there that we became awed by the fortress’s scale, especially the imposing steel heavy artillery turret in the shape of an enormous turtle shell that stood before us. Added to that, at the gable ends were two 138mm cannons that stood unfazed through the passage of time.
Rach Cat Fortress was built by the French over seven years from 1903 to 1910, with the aim of laying preparations for the First World War (1914-1918). It is worth remembering that, one hundred years ago, there were no submarines, while airplanes were just newly discovered and still flew close to the ground. Thus, heavy artillery was a strategic weapon. The French feared that English, German, and Dutch battleships would advance on Saigon from Vung Tau by the Soai Rap River, so they erected a battle station at a strategic position where the Vam Co and Rach Cat rivers both flowed into the Soai Rap River. With a cannon range of over 20km, the position could control an extensive area from Can Gio harbour right up to Saigon and the area of Go Cong.

Rach Cat Fortress has symmetrical arches about 300m long and 100m wide. The wall is arranged with 100 square loopholes. On the fortress gate, we could still read the words ‘Ouvreges du Rach Cat 1910’. The fortress has three subterranean floors and two elevated floors. The walls were cast with cement and steel pillars. It is 60-100cm thick, so the underground floors are always cool. The walls’ stability was enough to withstand the kinds of bombs in that era (at that time, bunker penetrating bombs did not exist). I found dense bullet marks on the thick iron gate and on the edges of the walls. The cannons were placed to the sides of the gate doors. In the area in-between were the control tower, storehouse, and living quarters. Around the fortress was a moat, but today it has been filled in. Local elders still recall that a tunnel remains under the fortress, one that runs out to the harbour, and that the tunnel doors are fitted with glass to make underwater observations. Since then, the glass has broken and mud and earth have flooded in, filling the tunnel and the fortress’s underground floors. The main firepower of the fortress consists of two artillery towers atop the ends of the gate doors. Each artillery tower is 6m in diameter and has two 240mm cannons placed in parallel. They are gunboat cannons meant to be placed on French battleships, but which have since been refitted for installation on artillery forts. Each cannon weighs 140 tons, uses cannonballs weighing 162kg, and has a firing range of 22.7km. The thick steel Schneider-style artillery towers can rotate to fire in any direction. On top of the artillery tower emerges a small tortoise shell-shaped turret with which to look out and adjust the cannon. If modern army cannons require that two iron shafts be planted into the ground behind it in order to withstand the shock of firing the cannon, then with this cannon emplacement, we can surmise just how stable and sturdy the fortress roof must be. To this day, despite the passage of over a hundred years, the artillery towers of Rach Cat Fortress are still quite sturdy, especially in that they have not rusted. It’s a pity that the cannons have already been removed; only two gaping oval holes remain on the body of the artillery tower.

Besides the main firepower of the two artillery towers above, Rach Cat Fortress also has installed six 75mm anti-aircraft cannons and four 95mm cannons from 1888.
The First World War concluded, and the Rach Cat Fortress defensive fortifications held without incident. Hence, the French colonialists transferred four 240mm heavy artillery cannons to other battlegrounds as reinforcements. Only small cannons were left. When World War II erupted, faced with the threat of Japanese Fascists occupying Indochina, the French restored Rach Cat Fortress and built two additional open artillery platforms at the two gable ends to position two 138mm cannons, which were produced in 1924 and 1927. Each of them weighed 5.5 tons. To this day, these two cannons still lie there, although they are no longer functional.
In March 1945, the Japanese overtook the French, seized the fortress, and carried the 75mm cannons away. In August of the same year, Japan surrendered to the Allies. Rach Cat Fortress fell into the hands of the revolutionaries, but they only held it for three months before they retreated when the British army assisted the French in reclaiming the fortress. From then until April 1975 when the Vietnam War ended, the Saigonese army and American troops took turns defending the fortress.
After April 1975, about ten movies borrowed Rach Cat Fortress in order to film scenes of the old artillery stronghold, since in all of South Vietnam, no artillery fort can compare with Rach Cat Fortress in its degree of magnificence, antiquity, and poetic sensibility.