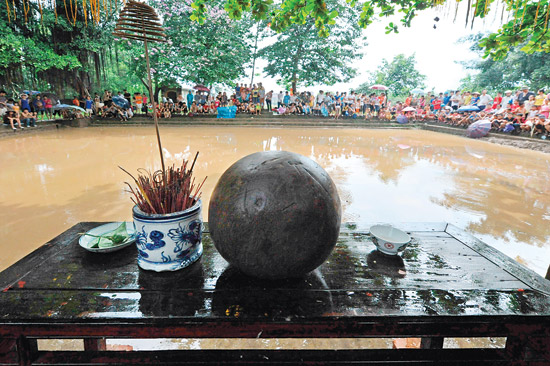 Muddy tradition wrestles its way back to Van Village

Before the game took place, the ball was placed on an altar and a ritual was held.

The most recent Mud Wrestling Festival in Yen Vien Village, Van Ha Ward, Viet Yen District, Bac Giang Province, was held on 27 May 2010.
The festival typically lasts for three days, and the final day is always the most crowded and exciting.
Villager Nguyen Duc Quang said, ‘It’s very interesting. Normally even money can’t get anybody to jump into the mud to wrestle. However, it is a real blessing to do so during these festive days.’
Historical Chua Van Temple is the place where the festival took place. The wrestling field is the yard in front of the temple where the worshiping normally occurs. The 200m² yard was filled with liquid mud. At two ends of the yard, two holes 80cm deep and 50cm wide were the dug for the goals.
Each team consists of eight young men wearing only loincloths. The participants from both teams fight for a wooden ball, with a diameter of 40cm, and try to score by pushing the ball into the goal of their opponents.
Nguyen Son Dai, 79 years old and a resident of Yen Vien Village, recalled, ‘When I was young, the village organised a very formal mud wrestling festival every year to worship Saint Tam Giang. This year was not an exception.’
Water and liquid mud came up to the ankles of the wrestlers. The match started at 2 p.m. and ended at 5 p.m.
I was told that the Mud Wrestling Festival in Van Village (Yen Vien Village now) existed since the period Ly Bon [Ly Nam De, who ruled what is present-day Vietnam from 544-548] fought against the Luong invaders (from what is present-day China). Legend has it that during this period, four generals-Truong Hong, Truong Hat, Truong Lung and Truong Lay-defeated devils in a wrestling match in a swamp and won the devils’ hearts doing so.

After the four generals’ deaths, villagers built a temple to worship them. The title of Saint Tam Giang was bestowed upon the eldest one. Every year, during the fourth or eighth month on the Lunar Calendar, Yen Vien Village holds the Mud Wrestling festival and parade to pay respect to Saint Tam Giang. After many years of interruptions, the festival was brought back to life in 2002.
Diem Cong Ky, head of the festival’s organisation, told me that after Saint Tam Giang’s ceremony, the wrestlers would drink three half-full cups of wine and eat watermelon and then gather at the fighting yard to greet the villagers. They would walk around the wooden ball placed in the middle of the yard. As they walked, they would shout their martial arts’ spirit name out to their audience.
The strongest men of each team were chosen to wrestle for the right to have the ball first.
The wooden ball weighs about 20kg, bigger than a football, and is kept carefully in the back chamber of the temple. It is taken out once every two years, only for the festival.
Nguyen Tien Trung, while watching the game with great interest, said ‘I have been to many festivals and parades in different provinces in the country, but I haven’t seen anything like the Mud Wrestling Festival in Van Village. The wrestlers here are very determined to win.’

On the day of the final, the temple’s yard was fully packed of villagers and tourists. The entire audience was covered in mud but they were all happy. For them, the mud is the symbol of good luck.