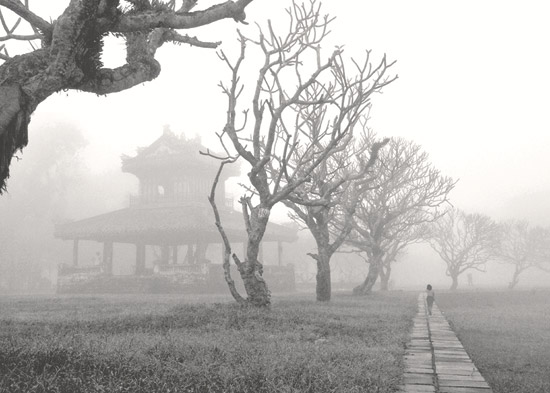 Misty memories of the Hue we were

In my youth were days in which dazzling white mist descended upon the villageâ€™s fields each summer morning. The sonorous voices of women amid the mist and the echoing chantey of some farmer punting his boat on the river could be heard, the latter rising like a jocund expression of love. The mist spread, rising from the surface of the river to enshroud everything. The chipper voices of young children could be heard, as well as the reverberant cries of crickets, until I tracked one down in the brume and caught the fellow. In the village, I grew up following the seasons of mist that cast upon the Bo River like an ethereal veil and coalesced into ever so many sweet memories from the indigent village landscape. Then there were evenings in which I would punt my boat, carrying a lass after school across the river to pick corn, singing, â€˜Evening after evening, picking corn along the river; the corn yet to bear fruit, picking flowers to take homeâ€¦â€™ Oh, those were the days!
I first encountered Hue through a bowl of mussel rice (com hen) on a misty morning, when the air was cold as the Lunar New Year approached. On that morning, I didnâ€™t know whether I saw the mist emerge from the mussel rice or whether the mist took form as a bowl of mussel rice. I took my inquiries to the girl who sold the rice, but she looked at me askance. â€˜Youâ€™re a pert one arenâ€™t you?â€™ I said to her. Then I asked her why she didnâ€™t remove her hat to lighten up. Her oblique eyes hidden, she retorted, â€˜Mom instructed me that girls must not take off their hats when the weather is misty, or else our hair will get damp and thereâ€™d be nothing with which to profess our vows with to anyone anymore!â€™ [In the past, youths in love often used to cut off locks of hair as an object that pledged their faithful love]. Heavens, I donâ€™t know whether it was she who had given rise to the mist so as to make it so dense or whether it was the mist that had engendered her so as to concoct a lover of steam flat-rice wrapped in Phrynium leaves (banh nam) for me, the sole customer who had passed by the road.
The mist of Hue was for me, from that time on, a mist of dreams. In Hue, there are two beauteous seasons of mist at the budding of summer and around the time Tet draws near, just as in human life the two most beautiful times are those of a girlâ€™s youth and those of â€˜returning to springtimeâ€™ (at menopause)â€”magnanimous, benevolent, and very passionate. The mist early in the season is dulcet, like the breath of the young lass whom I had met at the most beautiful time on Gia Hoi Bridge around two in the morning. The mist was white and thick like kapok suspended from the two rows of trees along the old quarter of Dinh Market, as if welcoming people to the Realm of the Immortals. That night, I looked out towards Huong River. The river current vanished in a veil of white brume. I was shaken, not knowing whether the river was still there or not. I desperately craved the echo of a line of chantey on the river or the sound of a swishing fish to reassure me. The mist of young women I would have the occasion to meet in the middle of the 12th lunar month. The most beautiful of mists usually lay along the willow fibres in the park at the southern bank of the Huong River and Le Loi Street towards Hue Station Bridge. Once I met the mist, I could not forget it, like the longings of love. A girl far from Hue asked me, â€˜Could it be that Hue is the mist?â€™
During a certain year, I had a friend who returned home at night and encountered the mist. He was exhilarated and rode his bicycle as if flying in the brume, singing Trinh Cong Sonâ€™s love song â€˜Phoi Phaâ€™ (Withering). That night, he did not sleep, but I know not whether it because of Hueâ€™s mist or his designs for life. Now, when we meet again, as my old friend has been content living far away, we greet one another like strangers. I still know that the mist is ephemeral, but the mist is still a faithful lover, who returns every year. Yet I always affectedly pine, â€˜How is it with you, oh mist?â€™