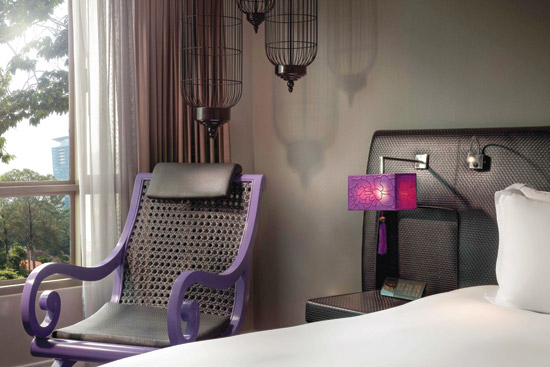 Even if you look upon a hotel just as a place to put your head down for the night, you are still going to spend at least a third of your time in your room and it is important you feel comfortable in it. At the five-star level, you can expect your room not to look tired, but energetically young. Refurbishment is an opportunity for a hotel to review its philosophy and respond to the expectations of its guests more accurately. I sat down over a Vietnamese coffee at the ground- floor Boudoir Lounge to listen to M. Betrand Courtois, General Manager, explain the brief given to renowned interior designer M. Maciag. I learned was the main idea was to incorporate French elegance with Vietnamese features. This is not a bland modern hotel catering solely for those who want a room that feels like home, but one that wishes to imbue the flavours of the country that the guest may have traversed half the globe to visit.

M. Courtois then led me on a tour to see four types of room in their newly acquired finery: superior, luxury, club floor luxury, and suite. The philosophy at work here is that your room begins as soon as you step out of the lift. The rooms are adorned with black and white photographs of idyllic and typical Vietnamese scenes and there are highly polished chests of drawers in the eighteenth century French style. One such commode on the club floor really does combine notions of the two countriesâ€™ culture. It contains a collection of Vietnamese calligraphy brushes under glass. Finally, all the doors have a gilded bamboo bird cage on them to let you know you are coming home to roost.
Starting on the seventh floor, the walls in the superior and luxury rooms are painted grey purple and deep pink, having a very warm and feminine feel. The oriental lacquering on the lampshades lets you know you are now in Vietnam. From the superior room, there was a great view of the city with washed walls and orange tiled roofs. At ground level, you never notice that HCMC can be Mediterranean or even Moroccan in looks. The luxury room had modern grey furniture, but with the curves of bygone French design. An ebony black slatted wooden easy chair married in a Vietnamese note to the ambience. The view from here was of rather boring skyscrapers, but with a stretch of the river visible. (Not the fault of the hotel, but I could not but think that the traditional oriental regard for harmony â€“ feng shui (Vietnamese â€˜Phong Thuyâ€™) seems almost literally to have gone out of the window these days.
The Club floor luxury room I saw continued the main theme, but with a little more spaciousness. Here the walls were painted grey and orange. The white mini fridge was in the form of one of those baskets in which you see people in the streets steaming buns or which are used in Cantonese restaurants to serve dim sum. We took a look at the shower area. Embossed on the glass doors were the first words of La Fontaineâ€™s version of the Aesop fable â€˜The Tortoise and the Hareâ€™ â€“ â€˜Rien ne sert de courirâ€™, or â€˜No Need to Rushâ€™. M. Coutois then pulled open a wardrobe to draw my attention to its backing as he explained â€˜Tuile de Jouyâ€™. This is a cloth canvass panting upon which is painted a French pastoral scene of the eighteenth century â€“ another very nice touch!
Then it was on to uppermost level to view the suite which contained all the features hitherto mentioned, but in, of course, apartment-sized dimensions. At the end of the vestibule cum living room area on a brightly waxed table there awaited a bottle of Champagne in its bucket and on ice as well as a carafe of orange juice. â€˜These would not be included in the price of the room,â€™ said Betrand. The bathroom here was the about the size of a normal hotel room. It was encased in uncurtained glass windows and looked so fine that I felt I would have been happy enough to sleep in it.
We returned to the Boudoir lounge for a fruit cocktail and chat. M. Courtois spoke to me of the countries he has worked in â€“ in particular England and China. But it seemed clear to me that Vietnam is the one for which he has the softest spot. He has worked before in this country and this hotel, but not as G.M. It pleases him to see the rooms under his charge now refurbished in a style that harmoniously fuses both his native landâ€™s culture with that of Vietnam. I hope you too may be lucky enough to get a taste and feel of these rooms. You may even like their vibrancy of your room so much that you might feel it difficult to step out of it.