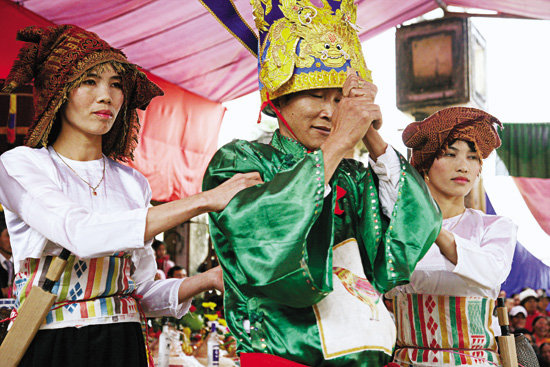 The Laos dance. The Laotain king and two of his servants congratulate the Vietnamese Emperor
The Wu Country (China) play

Vietnam Heritage, November-December 2011 — In Xuân Ph? village, in central Vietnam, there exists a repertory of five plays more than 1,000 years old. Created to honour a king after his victory in battle, they contain wonderfully mysterious gestures and movements that seem to conceal a wealth of information about Vietnam’s past.
My attention was drawn to these old play routines when I first looked at photographs taken by the French 70 to 100 years ago that depict ethnic-minority groups and distinctive customs of the country. The photos belong to the family of painter Nguyen Thanh Son.
Particularly intriguing were the dances performed with wooden masks that hid only half the face, from the tip of the nose down to the chin, while the eyes were decorated with peacock feathers.
In 1996 and 1997, I visited Xuân Ph?, which is part of Xuân Tr??ng Commune, in Thanh Hóa Province’s Th? Xuân District. While I was there on the days of the festivities, I decided to paint something about the Hoa Lang Dance, which depicts the people of Holland congratulating the king of Vietnam on a victory.
Later, I abandoned the project for more than a decade until 2008 when I returned to Xuân Ph? in the company of painter Phan Bao, who researches the folklore of Thanh Hóa Province.
In recent years, many theatre groups have been learning the distinctive features of Xuân Ph? and have developed modern versions. In the opinion of the people of Xuân Ph?, none of these groups has been successful.
The five plays in Xuân Ph? are based on a legend from the Dinh Dynasty in the 10th century, in which the king dispatches messengers to ask for help against an enemy making trouble at the border.
According to the legend, as officials and troops arrived near Xuân Ph?, a storm broke out and they had to stop and take shelter. That night, a royal messenger dreamt of a tutelary god of the village, who described his strategy against the enemy. The messenger reported the news to the king, who deployed a plan accordingly and eventually was victorious.
After the victory, the king bestowed upon the village the best songs and plays as compliments from the court. They included the five plays, the Chiêm Thành (Champa), Ai Lao (Laos), Ngô Qu?c (Wu Country/ China), Hoa Lang (Holland), and L?c H?n Nhung (Six Souls of Tartars).
Since that time the people of Xuân Ph?, from generation to generation, have performed these plays during an annual festivital on the 10th and 11th days of the second month of the lunar calendar. Five plays are performed, with more than 200 participants.
In the L?c H?n Nhung (Six Souls of Tartars) play, the words are unintelligible to all. According to the painter Phan Bao, they may designate a time of chaos and darkness when most of the population have died.
The play begins with an elderly couple, followed by a group of children who wear bamboo hats and bundles of split slats that resemble tangled hair. The wooden masks they wear are covered with smallpox marks and show one to five teeth. The children, arranged into pairs in two lines, advance and retreat in unison with their mother. With each jump, they give a howl. When singing, they adopt a rowing posture, rhythmically beating bamboo blocks as they dance.
In another play, a group from the Kingdom of Champa congratulates the king. It is composed of a lord, lady, servant, two acolytes and 16 soldiers. After an elegy is recited by the lord and incense is offered by two acolytes, the soldiers with strange wooden masks with a display of teeth begin to play in two lines. Their movements change quickly and abruptly, from standing to stooping to kneeling, as in martial arts. Their arms flow backward similar to the gestures seen in ancient Cham statues.
In the third dance, characters from Vientiane, the capital of the kingdom of Laos, are led by the king. An elephant and tiger begin to play, accompanied by hunters. The king being old and on a long journey, is given a back massage. Ten soldiers in two lines perform lissome gestures that mimic the movements of people gathering fruit or hunting game.

From the Champa play

In the fourth dance, a group from Holland is led by a mythical creature similar to a sea monster. This animal plays close to the ground as if it is swimming. The men from the Holland mission wear tall kepis and wooden masks with high-bridged noses. The masks are not attached to their faces but held in front of them with their teeth. After a Vietnamese girl welcomes them to their country, they later depart from it by rowing on the sea, just as they had arrived. The play ends with a boat-rowing scene.
Wearing Manchu-style clothes popular during the Jing Dynasty, the Wu (China) performers in the final play are welcomed by a Vietnamese girl. As in the previous dance, the performance ends with a scene of boat-rowing.
Of the five plays, the Champa, Holland, and Six Souls of Tartars are performed with masks. The Champa and Holland performers hold wooden masks in front of their faces with their teeth, while the dancers in the Six Souls of Tartars wear masks attached to their faces. Only three of the plays, the Six Souls of Tartars, Holland, and Wu, are accompanied by songs.
Although I am not a specialist on play and choreography and thus cannot offer a sophisticated analysis of these play routines, I can give my personal impressions.

Groups of performers, here and below, process to Xuan Pha communal house

In the Champa dance, there appears to be a deep relationship between the plastic arts of Champa as seen in central and southern Vietnam and the mystical gestures of the dancers with their arm and leg movements in reverse direction and their archaic gesticulations.
Embedded in these movements, we can recognise the activities of gathering, seeding, harvesting, hunting, martial arts and rowing. These movements closely resemble the dancing gestures that can be seen on bronze drums from the Dong Son culture that existed 2,500 to 2,000 years ago in Vietnam and other parts of Southeast Asia.
In the Wu play, the gestures of the fairies are similar to those of wooden sculptures found in the communal houses of villages in northern Vietnam in the 16th to 18th centuries. In all of the five plays, we can see behaviour that at times expresses the original wildness of tribal and clan life in the primitive commune, and, at other times, the transformations that occurred in feudal warfare.
The fascinating masks suggest ideas about destiny, the people’s cult of fertility and the metaphysics of ancient religions. I believe that, from the carnival of Xuân Ph?, we can find rich meanings for a long-forgotten spiritual dimension of Vietnam, deciphered and recognised from ancient figures in art and play.
The art of play brings up many lively evocations that ancient sculptures cannnot. That is due to the connection between the movements and the plot of the narrative, and, perhaps, also to the gestures, whose exact origins remain elusive.

*Phan Cam Thuong is a well-known painter and art critic

By Phan Cam Thuong*, with pictures by Nguyen Anh Tuan