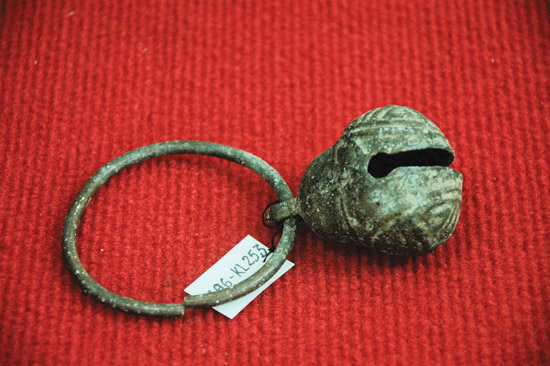 Cor people go through history with bells on

Tintinnabula are articles of decorative musical jewelry that predate written records. Tintinnabula can be made of lead, or iron, but bronze tintinnabula are most prevalent. At the archeological sites of the Dong Son and Sa Huynh cultures, bronze tintinnabula have been found in relatively large numbers. The citizens of Dong Son were fond of wearing calf and arm bracelets. The outsides of the bracelets always bore hooks with which to suspend long tintinnabula, another unique facet of Dong Son jewelry.
Today, many ethnicities retain their penchants for tintinnabula, especially the Cor people in Tra Bong and Tay Tra districts of Quang Ngai province and North Tra My district of Quang Nam province. At present, a number of bronze casting villages in Central Vietnam still produce these objects.
In a monograph titled The Traditional Culture of the Cor Ethinicity (Da Nang Publishing, 2009), the researcher Cao Chu, Duty Director of the Quang Ngai Department of Culture, Sports & Tourism and an authority on the Cor people, made many fascinating discoveries regarding the tintinnabula in their lives. According to Cao Chu, the Cor people have several kinds of tintinnabula. The tintinnabulum called grot is as large as a chicken egg and is hooked onto strings of beads that are used during worship ceremonies. A smaller tintinnabulum known as krang nang is thumb-sized, while the krak reo is pinky-sized and is worn on the back. Finally, the nut is as small as a bean; it is used to form the fringe of beaded strings that women wear at the waist. It is precisely this smallest form of tintinnabulum that is most expensive, since it is difficult to forge. It may fit in the palm of the hand, but the price it demands parallels that of a buffalo.
In the ritual offering ceremonies of the Cor people, strings of beads on which tintinnabula are attached at one end are indispensable. The strings of beads and bells are placed on the ritual offering tray and then rung to address the spirits. Tintinnabula are also essential to the Cor compatriots’ ca dao dance. The bells are worn on the neck, hip, and arms, and create animated, rhythmic sounds for the dance’s movements.
During funerals, every member of the procession must wear beaded tintinnabular necklaces on their necks in order to hold fast to their souls. If they do not, they believe that their souls will be spirited away along with the dead. In the rice-stubble ceremony, which concludes the harvest of the Cor people, the shamanuses thread beads with tintinnabula to summon the rice spirits so that they will incarnate the bells and beads, remain beside families, upkeep the granaries, and protect the family’s fortune. The Cor people also use bronze tintinnabula to decorate implements such as tobacco sheaths and quivers used for hunting.
People with many tintinnabula are those who are wealthy, well-respected, admired, and respected.
*Dr Tran Tan Vinh is director of Quang Nam Museum, in Quang Nam Province.

A single Tintinnabula of big size

A chain of three tintinnabula