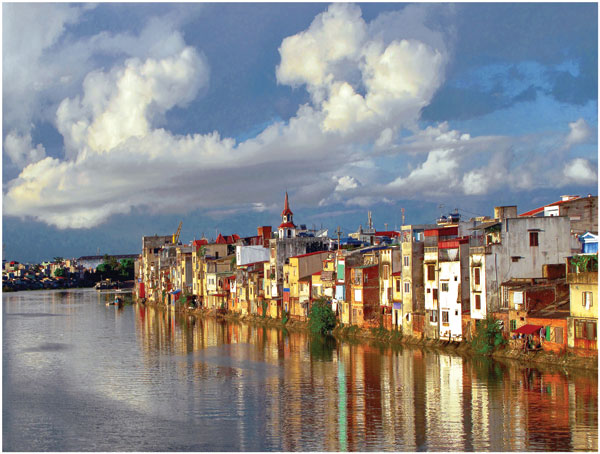 The streets and rivers of Hai Phong
are rich with nostalgia

Hai Phong is known not only for its famous tourist destinations such as Do Son and Cat Ba, but also as one of the first developed sea ports of the country. Traces of that development can still be found in the unique old quarters in the downtown.
The journey to rediscover the old streets in the center of the port city begins from a century-old house at the piers of Lac Long Bridge. It was built by the French in 1885 where Nguyen Tri Phuong Street begins. Today, it is the office of the Hai Phong branch of Vietnam National Bank. All the base and fender walls are built from tens of thousands of neatly cut 0.4-0.45m thick blue limestone bricks, giving the house a distinctive look.
Opposite the house are two old streets closely associated with the formation and development of the harbor city. Winding along dreamy Tam Bac River, Tam Bac Street used to be booming with busy docks and hectic river traffic. There was rarely such a street so favored by the artists and so present in their creations. Oil paintings and verses eternalized life on this age-old street during that remarkable period. Hai Phong used to have many streets such as Quang Trung and Nguyen Duc Canh Streets along Lap River, and Lach Tray Street along Lach Tray River providing easy access to docks and being convenient for trades. But today, due to urbanization, only Tam Bac Street somehow has managed to preserve the old look, reminding us of the times of hectic docking and loading.

Running in parallel with Tam Bac, Ly Thuong Kiet Street has also preserved many features of the old architecture. Houses here open to both of these streets. Walls yellowed by time, high and narrow wooden doors of long and narrow houses with double tiles reveal their Chinese origins. This street used to be called ‘Guest Street’, because the Chinese made up the major part of its inhabitants. Here and there, French villas built in the early 20th century in the Gothic style with small windows opening high up under curved domes, making the street a melting pot of Oriental and Occidental cultures. House no. 14 of Rice Alley (today’s 61 Alley) used to be an important liaison post of the Vietnam Communist Party before the August Revolution.
The area between the end of Ly Thuong Kiet and Tam Bac Streets is criss-crossed by many small alleys. All of them have names, but even the Hai Phong people rarely remember all of them. Among these are Trang Trinh, Ky Con and Hoang Ngan. Folks simply call the whole area the Ruined Bazaar or Tam Bac Bazaar. This is one of the very first and busiest bazaars of the city. Here, wholesalers hawk all sorts of goods. Shops and kiosks are arranged in a chessboard-like manner with crossing paths separating them. In the middle, there is a stele telling the story of an atrocity by the Americans in 1972 when they bombed and destroyed the entire marketplace. Since then, people have called it the Ruined Bazaar.
Cau Dat is another old street that almost all of Hai Phong’s guests have visited. During the French rule, it was called the ‘wealth funnel.’ In those days, Cau Dat used to be considered Hai Phong’s richest street, with many famous handicraft trades such as shoemaking, quilt making, sweets and food, grocery, photo and jewelry shops. Today, Cau Dat is not only a bustling business area, but it has also managed to preserve the old fame as the traditional sweet trade center of Hai Phong, similar to the Hang Duong Street of Hanoi. Each shop, such as Dong Phuong, Thanh Lich, Nhu Y and Song Kim, is a family business with secret recipes and formulas for the distinctive flavors of their products that draw multitudes of buyers and make the trade so blissful, especially during the Mid-Autumn and New-Year holidays. Even the simple fried rice donuts with paper-thin, crispy skin and silky stuffing are also a delight of passersby.
Hai Phong has not only busy streets where any hour is a rush, but also tender, nostalgic corners of Hoang Van Thu, Dinh Tien Hoang, and Ho Xuan Huong Streets. Mythically hidden amidst the hectic downtown, life suddenly seems quiet; a world away with century-old villas covered in moss and weathered by time. Passing under the canopy of big, old, year-round green trees of these dormant streets, people seem to slow down to enjoy a peaceful moment amongst the whirlpool of modern life.
Strolling on crowded commercial streets, sipping hot coffee in a sidewalk coffee shop, or nibbling some simple nosh with a cup of thick tea while everything around is blurred in the spiraling aromatic tea vapor on a cold winter day is an experience of the harbor city that no one will ever forget.

A corner of the ancient Ruined Market on Ha Ly Street