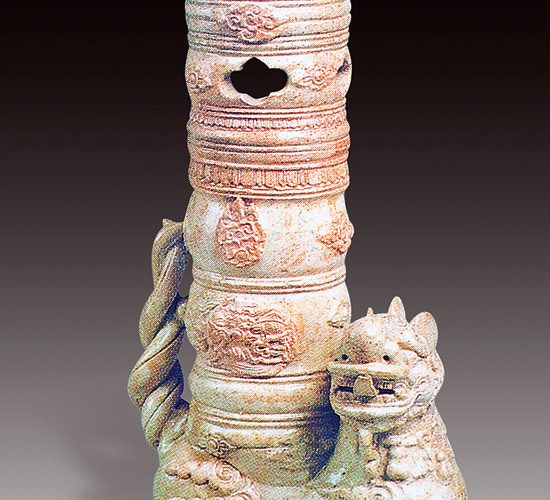 Ceramic riches of the 15th to 18th century

From 2,000 Years of Vietnamese Ceramics, published by National Museum of Vietnamese History, Hanoi, 2005.
From the 15th to 18th century, Vietnam had four dynasties, the Early Le (1428-1527), M?c (1527-1592), Restored Lê (1533-1789) and Tây S?n (1778-1802).
Despite political troubles and changes, the period saw a remarkable development of Vietnamese foreign trade. Vietnamese ceramics were exported from the ports of Th?ng Long (Hanoi), Ph? Hi?n (H?ng Yên), Vân ??n (Qu?ng Ninh), Thanh Hà (Hu?), Nam Sách (H?i D??ng), Th? Hà (B?c Giang), Phù Lãng (B?c Ninh), H??ng Canh (V?nh Phú), Hàm R?ng (Thanh Hóa) and Gò Sành (Bình ??nh).
Bát Tràng and Chu ??u are the best known centres of blue and white and polychrome wares for export as well as for domestic markets. Large lampstands and incense-burners were inscribed with the names of donors and potters and dates and places of production. About 30 potters of Bat Trang are known.
The best examples of Vietnamese ceramics of the 15th century are among 240,000 items recovered from the Cù Lao Chàm shipwreck in 1994-1999. The richness of form and decoration has fascinated many Vietnamese and foreigners, and the understanding of Vietnamese ceramics has been enlarged and revised.
In 2002, fishermen discovered a shipwreck with Vietnamese and Thai ceramics off Cà Mau Province in Southern Vietnam, and the Cà Mau Museum received over 4,000 items from the 14th to 15th century, decorated mostly with iron-blue.
Blue-and-white ceramics appeared, with many shapes, in the 14th century and flowered in the 15th century, during the Le Dynasty, mainly for export.
Typical examples are two phoenix-shaped ewers, jars with floral, dragon and phoenix designs, yuhuchun bottles with floral, wave, cloud and bat motifs, lidded boxes with flower and lotus-petal designs, bowls with floral, lotus-petal and fish designs, stem cups with vegetal designs, vases with dragon and phoenix designs, lampstands with moulded dragon, phoenix, blue-painted floral and lotus-petal designs and Han characters and an incense-burner with applied sacred animals, lotus designs and bodhi leaves.

The cobalt-blue-pattern and overglaze enamal, include all polychrome and blue-and-white pieces which were painted with overglaze enamels and fired a second time. A great number of pieces were found in the Cù Lao Chàm shipwreck. Examples include a dragon-shaped ewer, a phoenix-shaped ewer, two dishes painted with three flying birds or a swan in lotus petals, two dishes painted blue and glided with floral scroll or a snake among lotus inside a band of ogival panel and a statue of a noblewoman in underglaze blue and gilding.
Grey-blue ceramics were produced from 1580 to 1590 by ??ng Huy?n Thông and his wife Nguy?n Th? ??nh say from Hùng Th?ng Village, close to Chu ??u kiln, Nam Sách District, H?i D??ng Province. They consist of lampstands, incense-burners, flower pots and temple models. They have a grey-blue glaze in combination with brown and yellow glazes.
Of special interest are incense-burners in the shape of an upturned ?ông S?n bronze drum. Like lampstands, they are carved with bands of eight ray stars, V-shapes, parallel lines and lines of saw-teeth, all Dong Son motifs.
A very special ewer has a mouth in the form of a parrot and a fish-tail and fin, and is decorated with double spirals and parallel lines, along with peacock feathers and Han characters. Two geometric motifs came from Dong Son bronze drums.
Polychrome ceramics were made at Bát Tràng in the 16th and 17th century. They include lampstands, censers, statues of nghê (the mythical Chinese lion-dog), wine bottles and lime pots. All have combination of ivory, moss-green, grey-blue and brownish-yellow glazes.
The forms are sophisticated and decoration elaborate. The typical example has an uppermost section in the form of a lotus-petal dish, from which four dragons emerge around a central stand. Its middle section has two dragon-shaped handles and applied lotus blooms on two sides. Its lower section is decorated with bodhi-leaves and concentric circles in relief.
Round and rectangular censers are decorated densely with moulded dragons, cranes, lion-dogs, tiger-masks, woman figures, lotus flowers, bodhi leaves, chrysanthemums and rosettes.
Nghê statues, used as protectors of scared building, have different forms and are often carved with bodhi-leaves, lotus blossoms and cloud motifs.
Ivory and moss-green objects were made at Bát Tràng kilns in the 17th century, including lampsatnds, incense-burners, temple models and nghê statues, all in ivory and moss-green glazes with unglazed applied motifs.
Interesting examples are pairs of lampstands with kneeling nghê-form bases. A piece, now in the Guimet Museum, in Paris, made in 1637, according to an inscription, is decorated with a dragon medallion, lotus, chrysanthemum and the Han character for longevity inside a bodhi-leaf relief. Another piece has a lamp in the form of a bamboo section.

Crackled ivory articles were made only at Bát Tràng, from the 16th to early 17th century. The cracks resulted from the differential contractions of the clay body and glaze after firing. The pieces from the 16th to late 18th century often have a cracked ivory glaze, while those from later periods have cracked ivory glaze and blue underglaze decoration.
Inscription on some incense-burners and lampstands show that their makers are members of a family, namely ?? Ph?, his wife Nguy?n Th? B?n his son ?? Xuân V? and his daughter ?? Th? Tuân. There is evidence of a Vietnamese tradition of men as potters and women as partner painters of decoration. Some objects are also inscribed with a royal date, for Hoang Dinh (1600-1618), Vinh Thinh (1705-1719), Vinh Huu (1735-1739), Canh Hung (1740-1786) or Gia Long (1802-1819).
Among these items is a pair of lampstands made by ?? Ph?. The stands are in three sections, the most common form. The top section has a canopy shape and two lower sections are flower-vase-shaped. The decorative motifs include a band of bodhi leaves, four small sacred animals, the dragon, unicorn, tortoise and phoenix within a circle, the swastika, peacock feather and winding dragon.

A rare specimen is an incense-burner with a mouth in lotus-leaf shape, Kwan Yin figure, incised lotus and vegetal motifs on the globular body and carved lotus buds and leaves on three legs. Very imposing is a censer in the classic form with a nghê-shaped knob, openwork Eight trigrams on the lid, dragon-shaped handles, leaf scrolls and a key-fret pattern on the shoulder, moulded tiger-masks on the body and animal legs.
Yellowish brown works come mainly from Phù Lãng, (B?c Ninh), and C?y (H?i D??ng). All are glazed from eel-skin yellowish-brown to dark brown.
Perhaps the most fanciful items are incense-burners with rectangular or round sections, decorated densely and elaborately with classic motifs such as four sacred animals, lion-dogs, monster masks, lotus flowers, waves, meander patterns and the Han characters for longevity or for the most sacred class.
One highly imaginative piece is an ewer in the form of a standing horse. It has a curved spout under the horse’s mouth and a human face-shaped mouth on the horse’s back.
The earthenware includes all high-fired, unglazed ceramic pieces produced at various kilns in Vietnam for many centuries now.
Produced at D??ng Xá kiln (B?c Ninh) in the first millennium are two jars in Tang shapes.
Two examples of the Tran period are presented, one decorated with two bands of fish and the other with a band of two fish between two flowers.
Two examples of the Lê period, both from the Cù Lao Chàm shipwreck, have a straight mouth, two or three incised lines on the pregnant shoulder, with or without combed designs on the body.
Two big jars of the Restored Lê period both have a reddish brown glaze. One decorated with men and horses, the other with peacock and crane motifs. Inscriptions give the date of manufacture, equivalent to 1637, and the donor as a Muong-minority leader with the Dinh family name in Qu?ng Oai District. Present day Hà Tây Province.
Many of examples from 18th and 19th century are made at Th? Hà kiln (B?c Giang), chiefly incense-burners and ewers with a brownish-red glaze. They generally share a decorative style and motifs with Bát Tràng.
Brick, tile, architectural and art articles. So far a great number of fragments of dragon heads, lion-dogs, tigers as well as tile ends in yellowish green glaze have been uncovered at the site of Lam Kinh (Thanh Hóa), where the Le and Restored Le dynasties built several royal palaces and tombs. However, notable examples of this period are bricks. While Mac Dynasty bricks have carved lotus flowers and dragons carrying horse saddles, a Restored Le terracotta brick has a carved winged horse flying among clouds. Tower bricks from the 18th century have incised designs with women and carp-dragons.