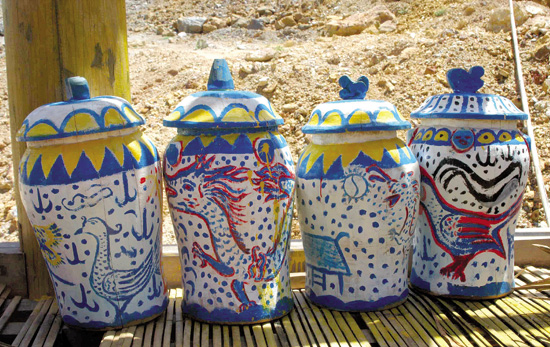 Clockwise from top left: a purely decorative drinking set; a wine jar; wine jars tied to a post so they won’t fall over (or maybe be stolen); wine jars of a different style

Vietnam Heritage, October-November 2011 — C?n wine is a kind of alcoholic drink popular with ethnic minority peoples living in mountainous areas of Vietnam. The wine is stored in ceramic jars made mostly by Kinh, the Vietnamese majority.
For the tribes in mountains, the jars are precious property. Wealthy families usually have different sets of big and small jars.
In addition to cattle, gongs and jewellery pieces, the jars are also an indication of the wealth of each family.
The tribes buy jars to use as offerings in weddings, objects to pay fines and debts, or as presents for relatives and friends.
Most of the tribes in the Central Highlands make their own can wine to meet their own needs. C? Tu people make c?n wine from glutinous rice, manioc, corn and other grains.
After being cooked, the grains are fermented by mixing them with yeast before being put into jars that are stored for a while before they become wine.
People call it can because they drink the wine with a c?n (long tube used as a straw). In the past, C? Tu people made yeast from rice, wild betel leaves, cinnamon bark or galangal.
For many tribes, jars are sacred objects where gods live. That is why they always put some chicken blood on the mouths of the jars to invite the gods to attend the parties or rituals, such as weddings, crop-harvest celebrations or ceremonies held to wish for good health. People usually drink c?n wine in a group rather than alone.
Tribal people in the Central Highlands may spend a lot to buy different kinds of jars. Over generations, they may end up collecting many old jars made hundreds of years ago. C? Tu people prefer to have lidded jars so they can store their wine for longer periods.

Text and photos By Tan Vinh*