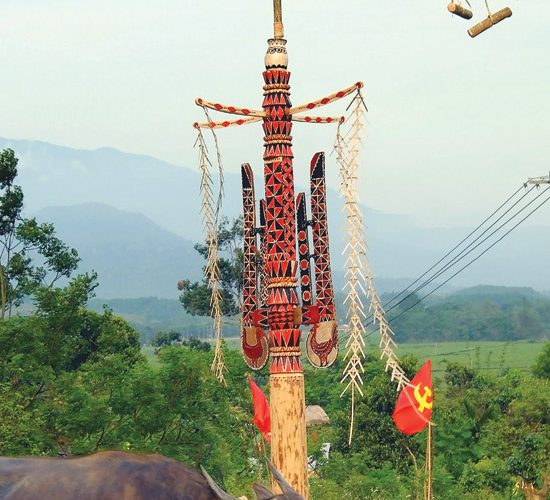 Pushing back the darkness

To the Vietnamese, the New Year’s tree (cây nêu) is a much-cherished cultural symbol. It comes with a legend soaked in love to humanity.
In Nguyen Dong Chi’s ‘Treasures of Vietnamese Folktales’ it’s said that once upon a time, a demon owned the country. People worked the demon’s paddies and submitted most of the harvests to him. The demon grew greedier and greedier, till one day, he decided that he would take all the things at the top and give people the roots. Humans had only rice thatch to eat, so they asked Buddha for help. Buddha told them to grow only sweet potatoes. That year people were happy, and the demon got only the leaves to chew.

The next year, the demon decided to take the roots and give the top. Buddha told people to grow rice again. The demon was hungry again. He got mad and ruled that the year after that, he would take both the top and the roots. Buddha gave people corn seeds to grow. The demon went hungry again, while people had more than enough corn. The demon decided not to let people work the fields anymore.
Buddha told the people to negotiate with the demon and ask for a piece of land just as big as the shade of Buddha’s frock hung on top of a bamboo tree. The demon agreed. Buddha made the shade cover all the land. So demon lost all his land and had to flee to the East Sea.
The demon then mobilized all his armies to come and take back the land. He lost the fight, because people used dog’s blood, pineapple leaves, onions and lime to deprive him of his power. Buddha exiled him to the East Sea again. Before going to exile, the demon asked Buddha to let him come back a few days every year to take care of his ancestors’ graves. Buddha agreed, out of kindness.
Since then, every New Year’s, the demon comes back to land. On this occasion, people plant a New Year’s tree so that the demon doesn’t dare to come near the populated areas. They hang wind bells on the tree to make noise that signals the demon to avoid the place. They also hang a bunch of pineapple leaves and ficus leaves to scare the demon away. They also draw a bow with an arrow that points to the East and sprinkle lime around the gates during these days to forbid the demon.
So this is why we plant a bamboo trunk in front of the house at New Year’s.
The tree is planted on the 23th of the last lunar month, which is the day the Kitchen God comes back to heaven, because from that time until New Year’s Eve, in god’s absence, the demon may sneak in to do havoc. The tree stays there until the 7th day after New Year’s.
The New Year’s tree is the symbol of the fight between good and evil to protect the people’s peaceful dwelling. In the absence of the gods, people must ‘borrow’ their magical power to protect themselves from possible intrusion by the demon.
In Vietnam, this tree is used and interpreted in many different ways, depending on the localities, ethnicities and social classes. Some trees are primitive, not attached to any ritual, as among the farming communities, where they plant it in their field after a harvest.
The tree is a sign to let others know that the owner of that field keeps rice sprouts for the subsequent harvest and so buffalos are not allowed to graze there. Among the minorities, the tree may also be used to mark unprocessed private land. In this case, they plant four bamboo trees in four corners of the area to claim private ownership.
Trees attached to festivities and rituals are more sophisticated. They are always a species of bamboo, 5-6 m tall, cleaned of all leaves and branches; only a few are left at the top to hang a hoop to which people can tie many different things, depending on local customs, such as leaves, flags, or little cloud-shaped gongs that ring in the wind. The name of those gongs rhymes with the word ‘happiness’, so their ringing is thought to bring happiness to the family.

In some places, at night, people hang a lantern on the tree to light the way for their ancestors to come home and celebrate New Year’s with the family. The tree is also where people hang the firecracker rolls to burn to welcome the ancestors and the God of Fortune to come to the family, and at the same time to expel evil spirits and bad luck of the ending year.
In the past, this tree’s function was to prevent evil, to worship the gods and ancestors and to sweep away the sins and bad luck of the past year.
During the festivals, the tree is the focal point of the sense of belonging. To the farmers, the farming calendar tells the time for every activity. The end of a year is the time of leisure, time to prepare for fun and festivities. When the New Year’s tree is planted, all other works stop. The tree gives an absolute balance in the succession of years. People can have fun with an easy heart, and the whole community plays and forgets the hardship of the past year.
In the past, the New Year’s tree also represented power; the more influential the family, the taller their tree. This custom is fading in the modern Vietnamese community and is being replaced by the custom of planting peach and ochna flower branches during the Lunar New Year.In recent years, however, the New Year’s trees are beginning to reappear in pagodas, temples, tourist and cultural centres, and in commercial companies.