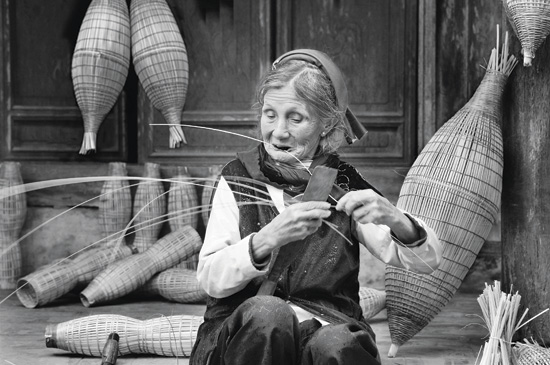 Thu Si commune of Tien Lu District, Hung Yen Province isknown for its trade of fish trap and cage plaiting. Many farmers here put asidefarming tools and get down to making these two fish, eel and crab catchingtools.

The trade is most popular in Noi Lang and Tat Vien villages.These farming villages are quiet. Groups of people silently plait cages andfish traps in the courtyards and on terraces. An elderly woman told me, “Oldand young, men and women, everybody here is handy.”

The cages and traps are made of a thin kind of bamboobrought from the forests. The bamboo is split into slender splints for theframe, and laths, as thin as wires. The laths are then woven around the framesto make the fish cages and traps. On average, each cage is made of 20 splintsand 25 laths. It takes a person 15-20 minutes to make a cage or trap.

The products are then sold in the neighbouring provincessuch as Bac Ninh, Hai Duong and Hai Phong.

A Thu Si commune official told us the plaiting trade brings50% of the income to the Tat Vien and Noi Lang households. This same officialremarked perhaps that’s why the fish cage and trap plaiting trade in this twovillages is quite stable.n