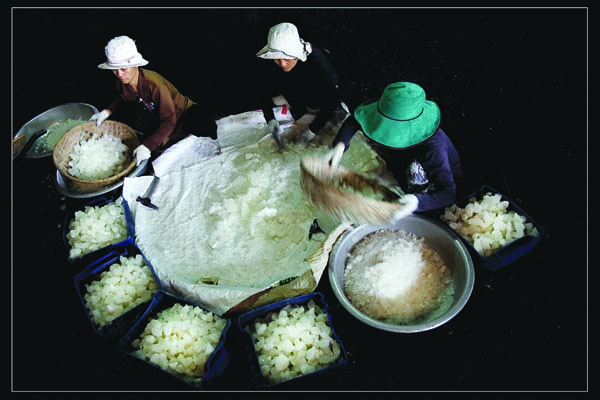 The sweet trade of Quang Ngai

Crystal sugar is one of the most famous specialties of Quang Ngai, a province in the middle section of Vietnam. The people of Quang Ngai have a long history of using crystal sugar, for example, to make tonics that cure coughs and sore throats, or to make all kinds of cakes and sweets and beverages, or just as candy.
The crystal sugar trade appeared in Quang Ngai over 100 years ago. Many times, it seemed unable to sustain itself, as workers couldn’t earn enough for a living. The main reason was because low quality but cheap Chinese crystal sugar was smuggled into Vietnam in great quantities.
Despite those enormous difficulties, Quang Ngai sugar makers have persevered maintaining their trade. Today, there are many villages in Quang Ngai famous for crystal sugar. Quang Ngai City alone has three famous crystal sugar-making villages: Chanh Lo Village of Chanh Lo Ward, and Ba La and Van Tuong villages of Nghia Dong Ward.
The main materials to make crystal sugar are usual commercial sugar, sea shell lime (to accelerate sugar precipitation), and chicken eggs which make impurities sink or surface, and improve the sugar flavor at the same time.
Three parts of sugar are carefully mixed with two parts of water and a little lime and then cooked in a big pan on a fire. A worker add whipped eggs to it. This is a traditional ‘detergent’ that makes impurities either surface or sink. The worker scoops out and throws away all the lather. Then the liquid is poured onto a piece of cloth stretched over another pot to filter out what ever sank to the bottom.
The purified sugar is cooked further. The quality of the final product depends on this most important stage. The fashion the sugar is boiling is a good indicator of whether the batch is a success or not. An experienced worker remarked, ‘if it sounds like boiling water, then the sugar is good. If it sounds like a steam engine, that’s a bad sign.’
From time to time, the worker has to put some of the sugar into a bowl to test its density. When the density is right, the sugar is poured into a thick corrugated iron tank to crystallize. Inside the tank, threads are stretched to help the process.
About 7-9 days later, the tank is tilted to a side to let out the treacle at the top. Then the crystal sugar is taken out and broken into suitable-sized pieces. The blocks of sugar, shining like quartz, are sun-dried before getting packaged for sale.
Quang Ngai crystal sugar is currently sold in many provinces and cities in the country and exported to some Southeast Asian countries.