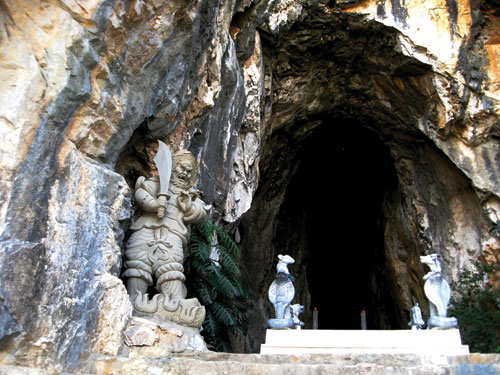 A scary day trip to the realm of the underworld

Mid-Vietnam, the land of poplars growing on white sand of endless shores by the vast blue sea, and especially Danang, the modern yet scenic city on Han River has a host of vestiges and uniquely beautiful sites. Danang is 960km to the North of Ho Chi Minh city on 1A National Highway.
Among those, the site of Non Nuoc at Ngu Hanh Son (Five Fingers Mountains) is not to be missed.
Ngu Hanh Son belongs to Hoa Hai Commune, Ngu Hanh Son District, 6km to the south of Danang. The place was discovered in the early 19th Century by King Minh Mang in one of his incognito trips. For centuries, Ngu Hanh Son has been considered the ‘Most Spectacular Site under the Southern Sky.’ With five peaks of Metal, Wood, Water, Fire and Earth that look like a palm of Buddha, according to the Five Matter Theory in the philosophy of Ying and Yang made systematic by Confucius, this is the center of the universe, emanating the pith of heaven and earth. Ngu Hanh Son hides beneath it a chain of fabulous caves miraculously designed by natural tectonic activities. The Cavern of Hades is the most otherworldly magnificent of them all.
With a VND15,000 ticket, one walks the Ying-Yang Bridge to cross Nai Ha River and gropes one’s way into the realm of Hades. The path is now dim, and dark, with a whistling flow of chill air. Bats hover or hang on the ceiling, screeching eerily, covering many with goose bumps. Deep inside the cave, there is a large natural hall with a statue of Ksitigarbha, the Bodhisattva of Hell, sitting at the center, as he is the Judge and the Lord of the underworld. On the left behind him are marble statues of the Keepers of the nine levels and the twelve gates of Hell.
The cavern splits into two big branches, one leading to heaven and the other to hell. The underworld is the realm of dead souls. Here people’s deeds are accounted by the Jurors and judged by Ksitigarbha Bodhisattva. Good souls will be freed and sent to Heaven, while the bad souls will be sent down to Hell. Good and bad are determined by a Scale of Justice that never fails. By the laws of the underworld, felons, no matter who they were, will then be punished as convicted. Then they take the ‘gruel of oblivion’ before being reincarnated.
There are 12 gaol gates guarded by 12 Keepers. The entrances are tight, some even require one to bend sideway to get through, and then it swells out where sinners are kept. Visitors will see reliefs and sculptures depicting the buffalo head – horse face or tiger head – bear face demons performing gruesome punishments such as slicing at a drum beat, boiling in oil, holding on to spikes, burning, disemboweling, cutting out eyes and ears and tongue, etc. In the flickering light, one really feels as if they have strayed into hell!
Unlike the dark and chilling hell, the path to heaven gets brighter as it ascends Along the path, one sees many statues and paintings depicting deities and bodhisattvas such as the Eight Fabulous Ones, Avalokite?vara, Xuanzang and his disciples on the way to obtain sutras, Shakyamuni Buddha, and scenes of ultimate happiness in the realm of Nirvana.
The scenes between hell and paradise are quite impressive to visitors, awaking in them many thoughts and emotions as they enter the area. According to Buddhist legends, Nai Ha River is divided into two parts, one of life and one of death. The water in Nai Ha River is blackish and fetid, with a lot of crocodiles, poisonous snakes and other hungry predators waiting for a bite. Those who did good deeds while alive will be lead peacefully by Dragon Bodhisattva across the bridge. On the contrary, the greedy, cruel ones will be chased by ferocious dogs and pushed into the water for the predators to
feed on.
The unique and spectacular Realm of the Underworld at Ngu Hanh Son, with folk tales and legends surrounding it, has become a great destination for tourists who come to explore the site of Non Nuoc.

Text and photos by Hoang Tham